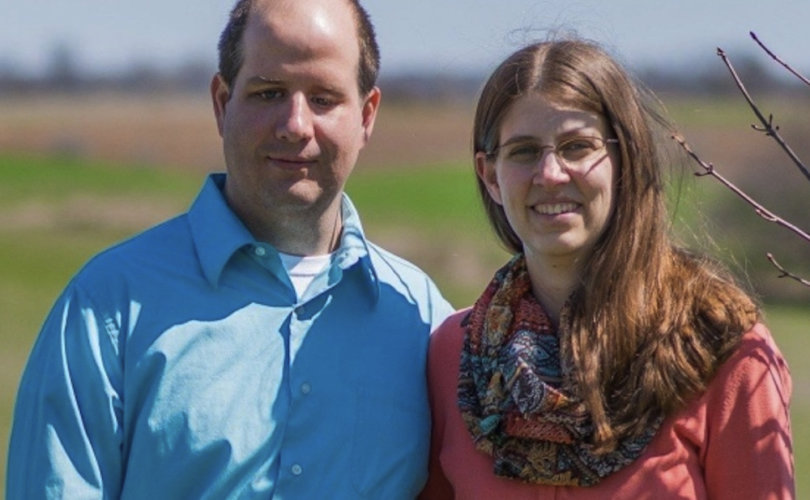 HAMILTON, Ontario, April 13, 2017 (LifeSiteNews) – A devout Christian couple is taking the Hamilton Children’s Aid Society to court after it ruled them unfit as foster parents for two girls because they would not tell them the Easter Bunny is real.

Derek Baars, a young Reformed Presbyterian minister, and wife Frances ran into trouble with their case worker shortly after taking two girls, ages three and four, into their rural home near Hamilton in December 2015. According to the Baars, she repeatedly insisted they tell the girls the Easter Bunny was real.

They refused because it was not true and on March 4, 2016, the girls were removed. The agency told the Baars they would never be given children to foster again.

“We want very much to be foster parents again, to help and serve children in need,” the Baars stated in a legal affidavit. They are seeking a court declaration that the Hamilton agency committed “an offence to the Rule of Law and procedural fairness, and our Charter rights as Canadians.”

Judging by the assessments from child care workers, the couple was unusual but quite suitable. Derek Baars, blind from birth, was described as thoughtful and a good listener.

Frances Baars was seen as a sensitive person who therefore took care to be sensitive to the feelings of others. Trained in early childhood development, she made crafts with the girls and took them to church events for children and on play dates.

The agency’s assessment of the couple records their prior insistence that they would not celebrate Halloween with their foster children out of religious conviction. Nor would they pretend any Christmas presents came from Santa Claus. This was apparently fine with the Children’s Aid Society.

A day after the couple signed their contract with the agency, the two girls were placed in their care. Hamilton has a shortage of foster homes. Only when they were assigned in January a permanent support worker, Tracey Lindsay, did the Easter Bunny issue emerge.

Though the couple explained they would be happy to stage an Easter egg hunt, they could no more lie to children about the Easter Bunny than about Santa Claus. Mrs. Baars said, “Ms. Lindsay informed us that it was part of our duty as foster parents to teach the girls about the giant imaginary rabbit known as the Easter Bunny, because she considered it part of Canadian culture. My husband and I were confused by Ms. Lindsay's insinuations that we were not meeting the children's needs, since the girls were happy and content.”

When the social worker persisted, said Mrs. Baars, “I asked her if she actually believed in the Easter Bunny or realized that it was fictitious. After evading this question initially, she finally admitted that the Easter Bunny was not real. But she did not consider it lying to tell children it was real. She believed it to be an essential part of every Canadian child's experience.”

Another issue emerged when the girls’ biological mother complained that she hadn’t received a picture of them with Santa Claus, something the Baars claimed that she had not asked for.

Then Lindsay advanced a “new, offensive and entirely unfounded complaint against us,” reported Mrs. Baars. “She informed us that she was personally afraid that if a same-sex adoptive couple met us that we would not treat them well. Ms. Lindsay repeatedly made derogatory statements and disparaging accusations against us based on our Christian faith.”

Finally, in March, the support worker delivered the ultimatum: no Easter Bunny, no children. The Baars stuck to their guns. So did the Hamilton Children’s Aid Society. With a day’s notice, the girls were taken. As well, the agency declared, they would be entrusted with no more children.

Mrs. Baars was especially affected. “We had poured our lives into taking care of the girls. To have them suddenly ripped away from us was deeply painful,” she said. “It was days after they left that the house felt empty. Without them, I lacked the desire to do anything.”

The Calgary-based Justice Centre for Constitutional Freedoms has taken up the Baars’ cause. It is seeking their record be cleared in the agency’s files, a court declaration that their religious rights have been violated, and their court costs.

The Centre’s president, John Carpay, said, “The Hamilton Children’s Aid Society needs to be held accountable for its misguided emphasis on a single, minor issue.”

“People can be good foster parents even if they refuse to say that the Easter Bunny is real, especially with the pressing shortage of foster parents which the Hamilton Children’s Aid Society itself has spoken about publicly.”

Added the Baars, “We believe that there are many Canadians of diverse ethnic and cultural backgrounds who do not believe in, or celebrate, the Easter Bunny, and who could nevertheless be good foster parents.”