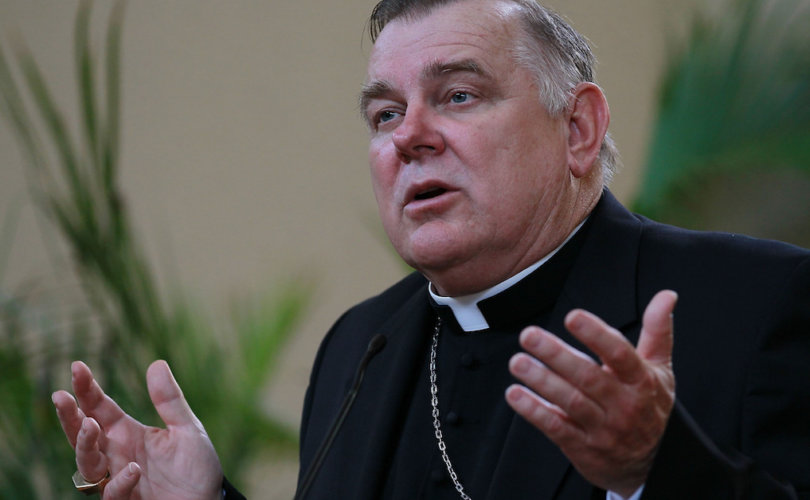 MIAMI SHORES, Florida, August 2, 2016 (LifeSiteNews) — An investigation that began as a group of parents concerned with financial and personnel changes at their children’s parish school revealed that their priest violated archdiocesan policy by hiring someone with a criminal record who had also been arrested for prostitution, fired longtime school maintenance staff in order to hire his friends, and went on lavish vacations and outings with the man arrested for prostitution.

A group of parishioners who call themselves Christifidelis (“Christ’s faithful” in Latin) at St. Rose of Lima parish became concerned with the sudden news that the religious sisters who ran the parish school were to be replaced and that tuition would increase by 40 percent per student, attorney Rosa Armesto, a spokeswoman for the group, said. Since becoming pastor roughly three years ago at St. Rose of Lima parish, the changes that Father Pedro Corces began making at the parochial school distressed and confused parents.

Christifidelis hired a private investigator, who uncovered police records revealing that Alberto Cardenas, who Corces hired as a St. Rose of Lima maintenance worker, was arrested for prostitution in 2000 for offering an undercover police officer oral sex for $15. In October 2004, Cardenas was put on probation after being arrested for felony insurance fraud.

“He was working for a medical clinic and he pretended to be … a licensed medical doctor and he would give people examinations and sign the examination and submit it to the insurance company,” Amresto explained. “In that particular case of the insurance fraud … he was found guilty and he was placed on probation.”

In 2005, Cardenas was charged with violating his probation.

The private investigator discovered that Corces typically spent “four nights a week” at Cardenas’s condominium and the couple went on luxurious vacations and frequent outings to expensive restaurants and clubs.

“As they are boss and subordinate, respectively, Father Pedro’s very close relationship with Alberto Cardenas is inappropriate,” Christifidelis wrote.

After meeting with the parishioners to discuss the mountainous 129-page dossier of their findings and conducting his own investigation, Miami Archbishop Thomas Wenski acknowledged in a July 5, 2016, letter that Corces “failed to follow” unspecified “clear archdiocesan policies,” and accepted the priest’s resignation. Wenski dismissed the majority of the report’s findings as “based on long discredited gossip, misinformation, and falsehoods.”

In his initial letter to the parish after meeting with Christifidelis, dated May 26, 2016, Wenski lamented that “much of the material [the parishioners have] … chosen to circulate via emails and the media is old, long since discredited gossip; some is false, such as allegations that background checks were not done or waived; or some is misleading, such as the speculation about reasons for increases in tuition.”

“This unfortunate string of events has fractured the spirit and unity at this long established parish and school,” Wenski continued. “It was instigated by a small group apparently in the hope of retaining the services of the IHM sisters whose decision to leave the parish is irreversible. Slanderous gossip, calumny, detraction — all sinful behaviors — have fomented division in the parish and school communities.”

Wenski also seemingly skewered the concerned parishioners in his first letter by asking the parish to pray for “the children who have been dis-edified by the spectacle of adults behaving badly.”

Archbishop: ‘No one hired or employed by Father Corces represented a risk to minors’

The parishioners’ report produced invoices, photos, and hotel records from Corces’ vacations to Puerto Rico and Key West with Cardenas. The hotel records indicate that during these trips, Corces and Cardenas shared a hotel room with one bed.

In addition to noting the frequency with which Corces spent the night at Cardenas’s condominium, the report also showed the unit’s cable bill is in Corces’ name.

However, the parishioners’ report never explicitly alleged that Corces had committed any sexual improprieties, although it did identify Cardenas as Corces’ “boyfriend.”

Nevertheless, Wenski’s final statement on the matter emphasized that “based on the outcome of extensive interviews of all persons that could have knowledge of the truth of these allegations as well as the results of a voluntary polygraph examination of Fr. Corces, it is concluded that no sexual impropriety had occurred.”

“The allegations were that he was unethical, not that he was having sex with this guy,” Armesto said. “He was having an inappropriate relationship with an employee under his supervision.”

The Archdiocese of Miami did not release any other information about Corces’ polygraph or comply with LifeSiteNews’ request for a list of the questions the priest was asked.

Despite Wenski’s acknowledgment of Corces’ failure to follow “clear archdiocesan policies,” his July 5 letter declared that “on a positive note, St. Rose of Lima Parish and School were in compliance with the Archdiocese of Miami Safe Environment protocols during Fr. Corces’ administration and no one hired or employed by Father Corces represented a risk to minors.”

“In an effort to guard the safety of Vulnerable Persons under the care of the Archdiocese, all Church Personnel, ages 18 and older, will be required to [sic] sumbit a completed Criminal Background Check Form as well as a complete set of fingerprints so as to facilitate a criminal background investigation,” the Archdiocese of Miami’s website states. “Eligibility for employment, volunteer work, or ministry will be contingent and conditioned upon a satisfactory background investigation.”

The Archdiocese of Miami’s “Creating and Maintaining a Safe Environment for Children and Vulnerable Adults” policy lists “prostitution” and “false and fraudulent insurance claims” as offenses that automatically disqualify a person from employment with the archdiocese.

“If you are arrested for any of these disqualifying offenses, you're not allowed to work in a Catholic school or parish, you’re not allowed to go on field trips,” Armesto said. “I have children in the parish school. All parents who have children in the parish school that want to participate in any school activity of their child’s, whether it be go on a field trip as a chaperone with your child’s class,” or help with classroom parties, “you as a parent have to be fingerprinted and have to be background-checked.”

“Parents obviously were very upset to find out that while here they have to be fingerprinted and background-checked to be able to participate in their own child’s activities, here is a maintenance worker who was hired with all these disqualifying offenses,” Armesto continued. “Someone who is allowed to be on the church and school grounds, around our children, for, you know, six hours a day while they’re in school, while we can’t set foot in the school even though our child goes to the school, unless we’re fingerprinted and background-checked. That didn’t go over well with the parents.”

“We contacted at various times our parish’s Volunteers Coordinator for confirmation that all parish employees have had their backgrounds checked but never received such confirmation,” Christifidelis reported. “Instead, she responded that Father Pedro, the Archdiocese and the nuns have to approve all new employees. However, we verified that the nuns were never consulted on these new hires.”

Mary Ross Agosta, the communications director for the Archdiocese of Miami, referred LifeSiteNews to Wenski’s two letters and did not respond to questions about which archdiocesan policies Corces failed to follow, the consistency of hiring parish employees with records that go against the archdiocese’s “Creating and Maintaining a Safe Environment for Children and Vulnerable Adults” policy, and the appropriateness of a priest repeatedly sleeping at the residence of an employee subordinate to him.

“The letters from Archbishop Wenski are sufficient to the audience they were intended and therefore, no supplementary information is deemed necessary,” Agosta said in an email.

Armesto likened Wenski to Sargeant Schultz, a character on the 1960s television show Hogan’s Heroes. Schultz’s famous line was “I hear nothing, I see nothing, I know nothing!”

“The bishop was upset at the faithful for bringing this up to light,” Armesto said. “I think that he would prefer that the faithful turn a blind eye.”

Corces and Cardenas spent night before Holy Thursday together

The report showed a ticket stub indicating Corces paid $257.60 for two tickets to the musical Kinky Boots, which is about a drag queen’s plan to develop footwear for other drag queens. Cardenas “checked in” to the performance via Facebook.

According to the report, it seems that Corces frequently drove Cardenas to work at the parish after spending the night at his condominium.

“Father Pedro generally parks in the rectory’s indoor garage so Alberto Cardenas generally walks [to] work from the rectory,” the dossier noted.

On Wednesday, March 23, 2016, Christifidelis’s private investigator observed Corces stay overnight at Cardenas’ condominium. The next day was Holy Thursday. Corces drove Cardenas to the parish the morning of Holy Thursday after stopping by a bakery to purchase breakfast for them, which the private investigator photographed Corces doing. According to the report, many similar incidents occurred.

“He was living a lavish lifestyle. That was documented,” Armesto said. “The cost of hotel rooms, the dinners, the expensive restaurants, the expensive shows. All of that on a priest’s salary?”

Armesto pointed out that “on a Friday during Lent,” Corces went out to eat with Cardenas and then went to a concert.

“I will give him credit. He didn’t eat meat, he ate sushi that Friday,” she said.

Corces is a former vocations director for the Archdiocese of Miami. During his time in that role, he recommended a man named Miguel Cala for a job at a Catholic school. Cala then molested children at that school. He was a seminarian while Corces directed the vocations office.

In 2005, an unrelated group also called Christifidelis exposed rampant homosexuality among priests in the Archdiocese of Miami.

“Father has many gifts to share with God’s people, but running a parish does not seem to be one of them,” Wenski wrote in his July 5 letter. “I will seek to reassign him to a position in which he can share these gifts but without the responsibilities of parochial administration.”