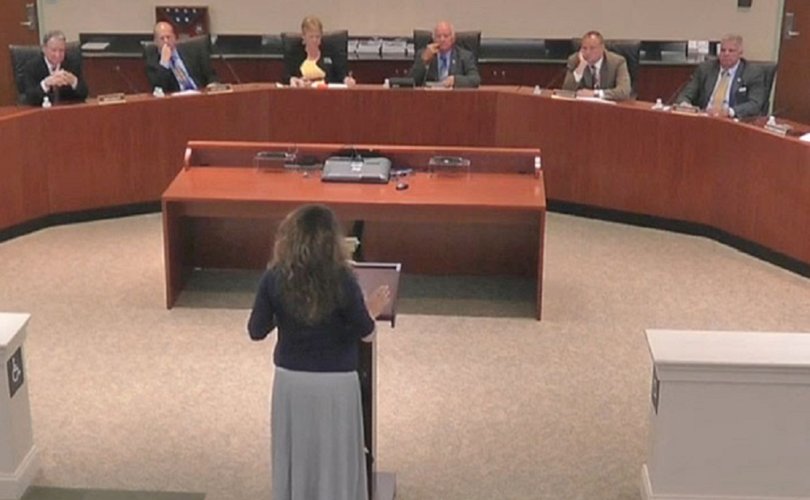 July 17, 2019 (MassResistance) — Angry local parents in Lexington Park, MD, led by a MassResistance-Maryland mother, stormed their local County Commission meeting on Tuesday evening, July 9. With strongly-worded, outraged testimony, they demanded that the officials deal with the horror at their local public library.

The event at the public library was organized by the Southern Maryland Area Secular Humanists, a radical anti-family atheist group that often targets young people with sexuality events, and PFLAG — a national LGBT group targeting youth. The public is repeatedly told that Drag Queens are “role models” for children and have important lessons to teach young people.

Parents wondered: Just who were these Drag Queens who would be reading to the children on June 23? But both the library staff and the event organizers steadfastly refused to tell the public. It was very upsetting for parents. But a few days after the event, a local newspaper article revealed their stage names, and later the Drag Queens bragged about their “performance” on social media.

It became clear why the Maryland event organizers wanted to keep this Drag Queen's identity hidden. What Tracy discovered was truly frightening.

Tracy found that one of the Drag Queens, “Stormy Vain” (real name: Todd Musick), is involved with numerous lurid and pornographic sexual businesses and activities. He runs “Stormy's Angels of Entertainment” and “Eroticasy.” Among his business offerings: male escorts/companions, nude maid services, sex toys, hiring out strippers for parties and one-on-one sessions, nude maintenance service, nude personal trainer, nude hair styling, X-rated candies, and “much more.” On his website (now offline), he offered “male companions” under a tab that warned “Nudity!! Must be over 18 to view.”

Our Houston MassResistance activist created a 70-page exposé on “Stormy Vain.” We sent a 45-page version of that to the local elected officials and also the news media.

But that report is so graphic and disgusting that (for the first time ever) we have had to create a separate version for our readers. It's still pretty bad. You can read it here.

This is a person that the library staff and the organizers believed was perfectly appropriate to be working with young children and teenagers! They clearly knew that the public would be outraged if this were known prior to the event — so they kept his identity hidden. This, unfortunately, is a common problem across the country with library staff these days, we have found. They are intentionally deceiving the public and acting as “change agents.”

A history of sexual deviance at library

Parents are particularly upset because this library is not new to controversy. For example, in March 2017, a Planned Parenthood-certified, pole-dancing “educator” and pro-prostitution advocate led a graphic sex-ed workshop — “strictly for kids only” — in the library. Local residents were shocked, and Georgia Kijesky led a protest outside the library.

Later that same year, Kijesky discovered a sexually explicit “Banned Books Display” in the library Through the clever marketing of the “banned books” (which aren't banned or they would not be in the library), kids are enticed to read sexually explicit (and quite graphic) children's books. One of the so-called “banned books” (which are more like instruction manuals) was: The Little Black Book for Girlz: A Book on Healthy Sexuality. Another “banned book” was two boys kissing.

Tess Goldwasser, a St. Mary's County children's librarian, actually wrote an article on the left-wing American Library Association (ALA) website on how to be a “secret librarian advocate operative” and sneak in LGBT books and programs targeting young children.

Controlled by “permanent” left-wing Library Board

The Lexington Park Library Board, which controls the library, is comprised of committed leftists. But only the Board — not the general public — can nominate new Board members. That way, only like-minded radicals get in. Georgia tried, and (of course) failed, to get nominated for the Board.

Among other things, the Board has instituted a deceitful ALA-suggested policy of allowing “anyone” to rent rooms in the library for public events. They encourage LGBT and Planned Parenthood groups to reserve rooms and hold events, and then claim that the library staff and Board have “no control” over what happens there.

Thus, the only control the public has over the library is through the County Commission (which is currently Republican controlled). The County Commission can cut funding to the library. It can also overrule the Library Board's policies. Over the past few years, parents have asked the Commissioners to act, but so far they have refused.

When the MassResistance report on “Stormy Vain” was released, parents could see the depths of depravity at their library and where the LGBT activists were really taking children and teenagers. When Georgia and a group of parents confronted the County Commission members at their monthly meeting and distributed additional copies of the report to them, it was like a bolt of lightning.

Watch the video here: This is some of the best “drag queen” testimony by parents that we've seen! They REALLY tell it like it is.

Some of the testimony …

Near the end of the meeting the head of the Southern Maryland Area Secular Humanists spoke. She was the only one to defend the Drag Queen event. She ignored the lurid exposé of him. Instead, she rattled off the usual absurd LGBT talking points. She referred to the parents as ignorant bigots and haters who want to help gay kids kill themselves. She added that Drag Queens have a First Amendment right to read to kids in the library, and if Christians don't like it, they should just stay home because it's a “popular” program. It didn't seem to have much of an impact, since everyone had heard it all before.

The Commission members appeared shaken by the revelations and the angry and graphic testimony by the parents. Onlookers said the Commissioners all appeared to be squirming and very nervous; several of their faces turned red.

The Commission has rarely seen this kind of outrage and explicit demands to take action. But they still are backpedaling about it — saying they will “look into it” but have avoided committing to any substantial action. It's not surprising, given the general anxiety that Republican politicians have over potentially angry leftists. But this time, the parents are even angrier — and are not giving up! There's a lot more to come on this.