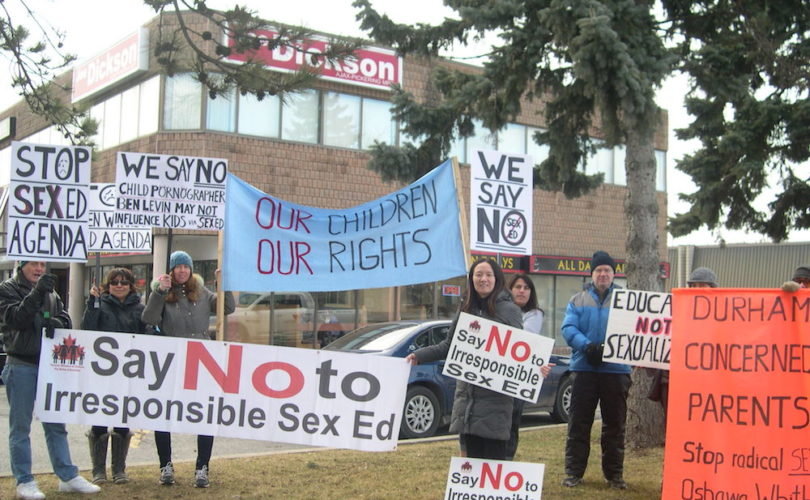 AJAX, Ontario, February 16, 2016 (LifeSiteNews) — Ajax mother-of-two Jennifer Lee had “agonized” for months over the Liberal government’s sex-ed curriculum when she had a moment of clarity.

“I was actually in a Bible study group and we were trying to focus on what our gifts are, about God using us, and we were watching a video about how this woman, God just broke her heart for people who have AIDS,” Lee told LifeSiteNews. “And I was like, wow.”

So Lee told her Bible study group the next week that she was going to publicly oppose the sex-ed curriculum in front of Ajax-Pickering Liberal MPP Joe Dickson’s office.

“I’m just going to stand there, and I’m going to protest,” she remembers telling them, “and maybe I’ll ask a couple friends. I just have to stand up against this. This is so wrong.”

Lee, whose 14-year-old son and 12-year-old daughter attend public school, has always asked to see what her children were being taught, she told LifeSiteNews, and she would pull her kids from classes she found objectionable.

So she knew from her own experience that when her son was in Grade 5, the sex-ed curriculum taught the details of sexual intercourse. “And I said to the teachers, ‘How can you be teaching this?’ And they said, ‘It’s from the board’,” Lee said.

So when the Liberal government’s updated sex-ed curriculum, introduced by Education Minister Liz Sandals in February, rolled out in publicly funded schools in September of 2015, Lee “agonized” over the possibility that kids in Grade 1 might be subjected to similar information.

“To me, it would be criminal if I sent my kids to my neighbour’s house to learn about this stuff,” Lee told LifeSiteNews in a telephone interview. “So what makes [Premier] Kathleen Wynne think that it’s okay for us to send our kids to a stranger in a public school or a Catholic school setting?”

Indeed, the Liberal sex-ed curriculum has provoked ongoing parental protests that included a 185,000-name petition that Conservative MPP Monte McNaughton brought to Queen’s Park in June 2015, a school strike in Toronto’s Thorncliffe Park in the first two months of the school year, and rallies outside 103 of the 107 MPP offices on September 2 in a CLC-organized provincial day of protest.

Although Lee made up her mind to join the action, she was reluctant to recruit through Facebook, as a friend had suggested, noting: “I’m kind of a private person.”

“Then I get the email from PAFE [Parents as First Educators] that said if there’s any little thing that you’re doing, let us know, so we can promote it. So I said, ‘Okay God.’ … I emailed them right away and they emailed me back.”

Not only did PAFE get out the word, but so did CLC and the Parents Alliance of Ontario, and with the three organizations promoting the event, 20 people showed up for Lee’s inaugural February 2 protest outside Dickson’s office.

She’s now committed to protesting outside Dickson’s office every first Tuesday of the month from 10:00 a.m. until noon, and has joined forces with Durham Concerned Parents, run by Oshawa parent Maritza Sialer.

Meanwhile, the Wynne Liberal government has poured $6.5 million into ad campaigns to promote the controversial sex-ed curriculum, according to documents LifeSiteNews received from a Freedom of Information request.

That includes $4 million on a September 2015 TV and online ad campaign, as well as $1.8 million for a summer radio ad campaign and HST. Internal emails also revealed that Education Minister Sandals actively discouraged MPP constituency meetings on the curriculum.

“Homemade signs can’t compare with the glamour and the glitter of television ads,” Sialer told LifeSiteNews in an email, but “the truth is always welcome, even when it is packaged in the humblest of manners.”

“There is no doubt that this government cannot be trusted,” she said. “They need to have their every move and decision, watched and monitored. We have few allies, but none of them work for the Ministry of Education of this government.”

President of Peterborough Concerned Parents Laura van Bakel pointed out the fact that the Liberals spent so much “marketing and advertising for their radical sex-ed curriculum is evidence of their awareness of the vast number of parents who are disgusted by it.”

“Never before has the government had to work so hard (or spent so much) to get its people to accept a curriculum,” van Bakel told LifeSiteNews in an email.

“When I think of all the children who have special needs who could have benefited from those tax dollars, it makes me angry and disgusted with our government.”

CPP has rallied monthly for the last nine months at Liberal MPP Jeff Leal’s office, with the number of protesters almost tripling in January from December. Van Bakel’s group is asking that Leal “tell Kathleen Wynne that as parents, grandparents and taxpayers of Peterborough [we] want her to remove this program from our schools.”

Lee says that Dickson’s staff told her the Liberal MPP would be glad to meet with her, and she expects that will happen in the near future. She also hopes people will be inspired to start similar protests in their own constituencies.

“When I’m holding my sign I’m praying for people to be stirred up to actually do something,” Lee said, adding: “Someone said to me, ‘Thank you so much for organizing this.’ I don’t feel like I’ve really done anything. I think God’s done most of that.”

“You know, you give Him your loaves and your fishes, and He does the rest,” she said. “I feel really, really blessed to be a part of it.”