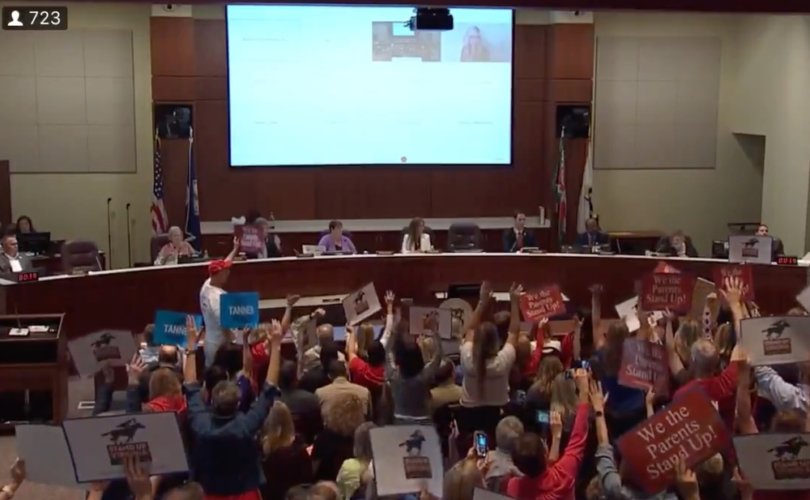 America First Legal’s Center for Legal Equality filed the “blockbuster lawsuit” against Loudoun County Public Schools “on behalf of 11 courageous parents” in response to “the district’s systemic and egregious moral corruption of children and its deliberate, and almost gleeful, violations of parental rights to control the upbringing of their children,” Fox reported.

“Many will remember that Loudoun County was the epicenter of the debate over parents’ rights in the fall of 2021,” America First Legal stated in a June 29 press release. “Today we bring that fight to the court to vindicate the rights of parents, not just here, but everywhere.”

According to the conservative group, “The delusion that public school bureaucrats – not parents – have the right, the authority, and the power to decide what’s best for a child is a sickness that has spread across the country to schools in all states.”

EXCLUSIVE – America First Legal has filed a lawsuit against LCPS “for the district’s systemic and egregious moral corruption of children and its deliberate, and almost gleeful, violations of parental rights to control the upbringing of their children.” https://t.co/dWcjXYETju

RELATED: The LGBT mob is coming after our children: It’s time to fight back

Loudoun County, Virginia became a major political and cultural flashpoint last year after parents raised the alarm about the school board’s implementation of radical gender ideology. Policies enacted by the school board permit boys who identify as girls to use girls’ bathrooms and locker rooms, and force children to use the preferred gender identity “pronouns” of peers.

Last year, Daily Wire investigative reporter Luke Rosiak broke an exclusive story showing that the school board had tried to cover up an incident in which a boy wearing a skirt raped a female student in a school bathroom.

BREAKING: Loudoun County father who was dragged out of woke school board meeting reveals his daughter was ‘raped’ in the girls’ bathroom by a ‘skirt-wearing’ male student who was arrested for assaulting a SECOND girl months later – but staff did nothinghttps://t.co/awoZcVQx3l

Many outraged parents responded to the controversy by flocking to school board meetings to denounce the radical policies, helping to spark a nationwide parents movement.

The mobilization of American parents against radical agendas in the classroom gave rise to a bevy of Republican-led initiatives to expand parental rights, ban LGBT-promoting curricula in the classroom, and require students to only use bathrooms and locker rooms corresponding to their biological sex.

“I think that Loudoun County Public School has really been the poster child across the country for … epic mismanagement and violation of parental rights and commitment to … really what has become almost a state sponsored religion of wokeism,” AFL senior adviser Ian Prior told Fox News Digital.

The AFL lawsuit cited two Loudoun County rules (Policy 8040 and Regulation 8040) that they said “compels student speech, forces young children to use bathrooms and locker rooms with members of the opposite sex, and keeps parents in the dark when their children lead a double life as a different gender during school hours,” Fox reported.

AFL also blasted the school board for making books available to young children that encourage them “to question their gender,” blocking parents from removing pornographic books from school libraries, and requiring kids to list their gender “pronouns” in class.

In addition, the filing accused Loudoun County Public Schools of “refusing student’s requests to go to the water fountain and bathroom as a form of retaliation for not wearing a mask,” and “hiding information from parents by charging exorbitant fees or claiming legally deficient exemptions to Freedom of Information Act requests.”

According to Miller, his group’s “historic and trailblazing lawsuit” is intended “to shut down these sexually and psychologically abusive behaviors being waged against children.”

In the press release, the AFL asserted that “nowhere are there parents with more courage, more fight, and more rock-solid dedication to their children than in Loudoun County, Virginia.”

“We are proud to stand with them in this groundbreaking lawsuit, pave the way for similar lawsuits around the country, and to be part of our nation’s fight to roll back the cult of wokeism in schools and to protect parents’ constitutional rights,” the group said.