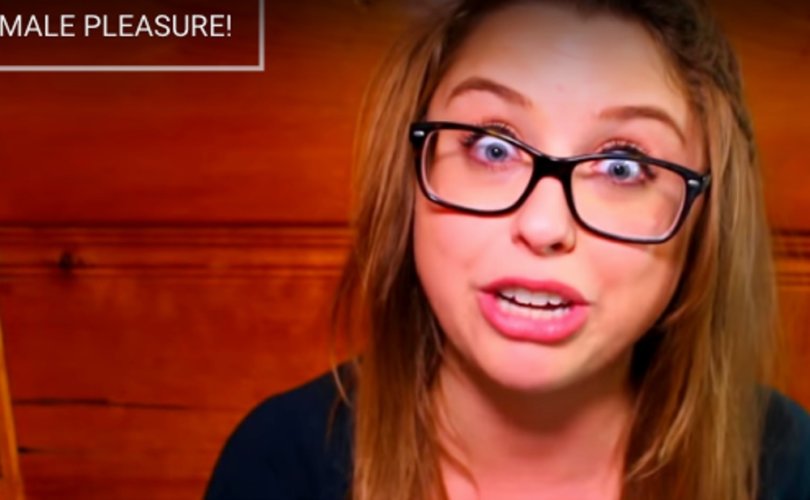 That teacher is Western Albemarle High School’s Frank Lawson, who gave his approval for a group called the Charlottesville Sexual Assault Resource Agency (SARA) to show 14-year-old girls a Laci Green video. Green, who has created videos in partnership with abortion company Planned Parenthood, is a self-described “sex educator” and YouTube personality. She went to UC Berkeley and touts on her website that she “works with Planned Parenthood.”

In the video that local media say a SARA representative showed 28 students, Green discusses “penis pleasure,” sex toys, and how “your butt can be a wonderful source of pleasure as well.” In the beginning of the video, she offers viewers a discount to an online sex toy store that describes itself as the “#1 adult toy superstore.”

Critics say exposing kids to this video could constitute predatory “grooming” under Virginia law and could be prosecuted as such.

The pro-family law group Liberty Counsel is representing outraged parents, who have also expressed to local media their displeasure about the lesson.

“The narrator in the videos was intentionally made up to look as young and ‘child-like’ as possible, for the target audience of girls,” Liberty Counsel wrote in a demand letter to the superintendent of Albemarle County Public Schools.

Liberty Counsel demanded the school district confirm it will confirm that the Charlottesville SARA will no longer be allowed to teach sex ed in schools and that SARA’s promiscuity-promoting “sex positivity” curriculum won’t be taught either. The law group asks the school district to confirm:

NO materials will be shown or provided to students as part of [sex ed] or similar sexuality based instruction that have not been first made available for review by parents with the opportunity for parents to opt their children out of the instruction.

“If I do not receive this response, Liberty Counsel will take further action to prevent further irreparable harm to the rights of our clients,” wrote attorney Mary E. McAlister.

“What we did not do was vet that [material] as we should have,” Western Albemarle High School Principal Darah Bonham told NBC29 of the graphic video. “We just assumed that what was provided was the same” as what the school expected.

SARA says Lawson signed off on the Laci Green materials shortly after receiving them for vetting.

“I’m embarrassed that this occurred,” said Bonham. “I’m upset about it and I know it’s been the same way for our kids and for our families.”

The video “was highly offensive, entirely inappropriate for a student audience and school administrators called each family on April 13 to apologize for its use,” Kate Acuff, chairwoman of the Albemarle County School Board, said in an email to a parent, according to the Daily Progress. “The video was not previously screened by the school, which was a violation of our standard practice.”

Liberty Counsel outlines what it knows about how the material got into the classroom:

SARA claims Ms. Huston obtained “approval” to show the above sexualizing videos from WAHS Physical Education Department Chair Frank Lawson. While a school employee should never have approved that which he apparently did not review, ultimate blame for this “approval” lies with Ms. Huston and SARA, which should have specifically pointed out the addition of this obscene material to the previously approved curriculum. Despite this deception by omission, SARA’s Community Outreach Director, Sheri Iachetta Owen, expressed no regret, instead shifting responsibility back onto ACPS: “In advance of the scheduled visit to the school, on April 2nd at 8:34 a.m., we emailed the curriculum to the head [physical education] teacher and requested that the content be reviewed and approved,” SARA said in the statement. “On April 2nd at 9:29 a.m., we received an email approving the curriculum.” At this date, I understand that the District has disavowed SARA, and media reports that the District will be disaffiliating with SARA because of this shocking lack of judgment, and what amounts to mental rape of 14-year-old girls. Yet in an email, WAHS Principal, Darah Bonham, has implied that SARA will eventually return: “We don’t need them [SARA] back in the building until the dust settles.” (Emphasis added). The dust will not settle on this issue. It is not acceptable for SARA to remain affiliated with ACPS as a provider in any fashion.

Not only did the lesson violate the girls’ rights, it violated their parents’ rights, as well, Liberty Counsel maintains: “The law is clear that parents, not agents of the state like teachers, and not outside radical groups, have the right to direct the upbringing and associations of their children. The law presumes that parents possess what a child lacks in maturity, experience, and capacity for judgment required for making life’s difficult decisions, not activist school employees.”

SARA has had a 5-year relationship with the health teachers at Western Albemarle High School. As part of this ongoing relationship, each year we provide a lesson on bystander intervention. This year we expanded the curriculum, and this expansion included a video on how to be intimate in a healthy relationship. In advance of the scheduled visit to the school, on April 2nd at 8:34 AM, we emailed the curriculum to the head PE teacher and requested that the content be reviewed and approved.  On April 2nd at 9:29 AM, we received an email approving the curriculum.   As a result, the curriculum was delivered to 2 classes last week at Western Albemarle High School. The school has informed us that they received some negative feedback about the content. We therefore do not plan to continue using this particular component of the overall bystander intervention curriculum.

Green acknowledged the parents’ fury on Twitter, writing that her inbox is “always open” for their questions and suggesting to parents that their kids are already emailing her with sex questions. She said “sex ed teachers are always open to talking through parent concerns” because “we are here to help” and work “with…not against” parents.