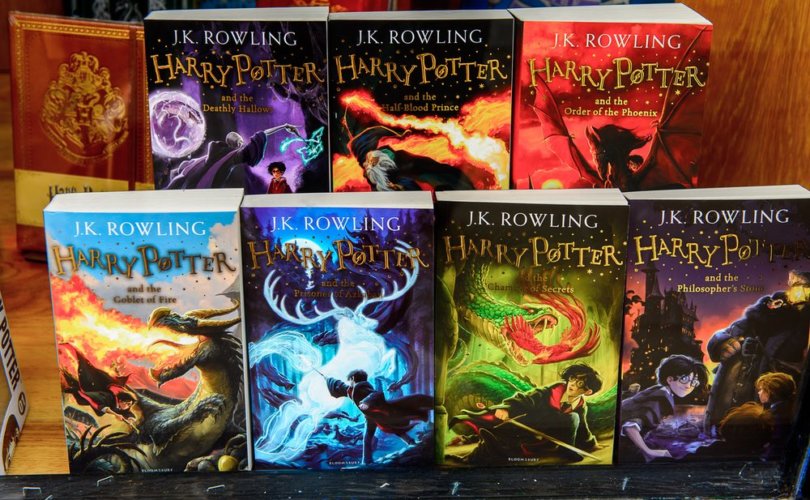 NASHVILLE, Tennessee, September 5, 2019 (LifeSiteNews) – A Catholic parochial school has drawn international media attention after its pastor removed the Harry Potter series from its library, citing the concerns of several exorcists.

The Washington Post, The Guardian, Business Insider, and Newsweek all published articles on an email Father Dan Reehil wrote to faculty at St. Edward Catholic School providing them with his detailed reasons for removing the books. The Telegraph produced an article about the history of “Harry Potter-inspired ‘satanic panic.’”

The Washington Post breathlessly reported on the concerns expressed by “parents” in “an anonymous letter,” which “suggested that the decision raised larger questions about the priest’s ‘fringe’ views and his ability to ‘critically assess and discern fact from fiction,’ and complained that the decision had been made unilaterally without input from parents or other school administrators.”

However, the reasons Fr. Reehil gave for removing the books are some of the same reasons Pope Benedict XVI and various exorcists, including the late chief Vatican exorcist Father Gabriele Amorth, have cautioned against the series.

“These books present magic as both good and evil, which is not true, but in fact a clever deception,” wrote Fr. Reehil. “The curses and spells used in the books are actual curses and spells, which when read by a human being risk conjuring evil spirits into the presence of the person reading the text.”

“The books also use nefarious means to attain the goals of the characters, including the ‘good’ characters,” he continued. “From a moral perspective, this is a problem, especially in the formation of young Catholic children.”

The priest went on to explain that Catholic moral theology teaches the ends do not justify the means.

“The Harry Potter books do not follow this premise; rather they promote a Machiavellian approach to achieving the ends they desire with whatever means are necessary,” wrote Fr. Reehil. “The books also glorify acts of divination; of conjuring the dead, of casting spells among other acts that are an offense to the virtue of religion – to the love and respect we owe to God alone. Many reading these books could be persuaded to believe these acts are perfectly fine, even good or spiritually healthy.”

He then went on to quote the Catechism of the Catholic Church:

All forms of divination are to be rejected: recourse to Satan or demons, conjuring up the dead or other practices falsely supposed to “unveil” the future. Consulting horoscopes, astrology, palm reading, interpretation of omens and lots, the phenomena of clairvoyance, and recourse to mediums all conceal a desire for power over time, history, and, in the last analysis, other human beings, as well as a wish to conciliate hidden powers. They contradict the honor, respect, and loving fear that we owe to God alone. (CCC 2116)

All practices of magic or sorcery, by which one attempts to tame occult powers, so as to place them at one's service and have a supernatural power over others – even if this were for the sake of restoring their health – are gravely contrary to the virtue of religion. These practices are even more to be condemned when accompanied by the intention of harming someone, or when they have recourse to the intervention of demons. Wearing charms is also reprehensible. Spiritism often implies divination or magical practices; the Church for her part warns the faithful against it. Recourse to so-called traditional cures does not justify either the invocation of evil powers or the exploitation of another's credulity. (CCC 2117)

“St. Edward is committed to advancing the Catholic faith and teaching the standards of sound doctrine to instill strong Catholic moral values,” the priest concluded. “Books or other materials which present a possible threat to our faith will not be promoted by our church or school.”

“The chief priority of our Catholic system is education in the Catholic faith and the faith development of our students,” the St. Edward website says. “A major focus of our school system is the moral development and guidance of all our students in accordance with Christ’s teachings.”

Part of the school library’s mission is to “Encourage students to embrace and model the gospel of Jesus Christ by providing materials that support the values and mission of the Catholic Church,” its website says.

“As a parent of (five) children, high school age down to (nine) months, I fully support Father Dan's guidance and authority in guarding our youth against things he believes could have a potential for harm. Also in paying for private, Catholic education we personally do not have any issue with limiting exposure to secular books and entertainment through the school,” Beth Robinson, a mother and spiritual directee of Reehil’s, told LifeSiteNews via email. “Ultimately as parents and as primary teachers for our children, if we decide to let them watch Harry Potter then that can be on our our time.”

Fr. Reehil’s “love for the Church, (r)eligious life, and families is clear in everything he does,” said Robinson. “I appreciate his straightforward personality and his boldness in pushing back against the lies of today's culture, even if it makes him unpopular as a person. As a Shepherd, he cares more about getting his flock to Heaven and saving the lost than appeasing the masses … I have the utmost respect for him as a person and priest.”

“The decision was within his authority as the Pastor of the parish in which the school is located,” commented Kyle Clement, SMD. Clement is the Case Facilitator/Administrator for Father Chad Ripperger, Superior of the Societas Matris Dolorisissimae, an order of contemplative, exorcist priests who provide consultation, evaluation, and oversight to bishops and their exorcists internationally.

Clement screens and manages over 750 cases of suspected extraordinary diabolical activity each year.

“The decision is prudent as one of the primary obligations of a Priest to the souls placed under his authority is the task of determining ‘clean from unclean,’” Clement told LifeSiteNews via email. “This determination is directly related to things to be ‘consumed’ by those individuals and is not limited to education. The subject material is not consistent with the (tenets) of the Catholic faith.”

Commenting on the emotional response that questioning Harry Potter often elicits from Catholics, Clement observed, “Inordinate response to an authoritative statement or directive is often an indication that the person in opposition to the authority has an inordinate attachment to the thing or activity prohibited.”

“From what I have seen, the attacks against the Catholic Church, Father Dan(,) and St. Edward's school have been not just unfair, but callous and cruel in nature,” said Robinson. Fr. Reehil “is well within his authority to remove books and entertainment from the school he is helping guide, whether others agree or not. A difference in opinion is (OK) when expressed thoughtfully and opens a dialogue for understanding and mutual conversation. However, nasty personal attacks do nothing but reduce the opportunity for understanding and tend to cause unnecessary division.”

O’Brien, who wrote Harry Potter and the Paganization of Culture, said there is a “growing awareness” among priests, exorcists, and even some educators that “it’s not enough to just get students and young people in general reading.”

“The crucial question is, what are they reading?” he continued. “Because the young are in a state of formation. They’re not reading Harry Potter the way an academic would.”

Why do some Catholic leaders oppose Harry Potter?

Critics of the popular series say it negatively predisposes readers to a propensity for the occult.

As then-Cardinal Joseph Ratzinger, Pope Benedict XVI expressed concern about the “subtle seductions” of the series. Fr. Amorth said in 2002, “Behind Harry Potter hides the signature of the king of the darkness, the devil.”

The exorcist repeated the condemnation in 2006, saying, “You start off with Harry Potter, who comes across as a likeable wizard, but you end up with the Devil. There is no doubt that the signature of the Prince of Darkness is clearly within these books.”

One of the main complaints critics like Fr. Amorth have against Harry Potter is that it portrays some “magic” as “good,” whereas the Church teaches any form of magic or sorcery is evil.

“Embedded” in the Harry Potter books are “layers and layers of subliminal messages that can influence the young in the direction of involvement in occultism,” said O’Brien. “Not all those who read the books will do so – they may read it superficially for fun … but the messages are being implanted nonetheless.”

Former astrologist Marcia Montenegro, who was involved in the occult before becoming a Christian, has said that although the Harry Potter books contain “fantasy and good story-telling … the stories are infused with references to actual occult practices.”

This was one of Fr. Reehil’s concerns about keeping the books in his parochial school’s library.

According to Montenegro, the books do contain real “magic” used by those involved in the occult: “These books gave information on actual occult concepts and practices, and, in some cases, directions on how to perform spells.”

“Practices of magic by man are absolutely forbidden because they open the interior life to some degree to the influences, the promptings of demonic spirits,” said O’Brien. “Magic is about power. This is about power. Magic is about power – powers – that do not rightly belong to man. They are not good for us. Harkening back to Tolkien, especially in Lord of the Rings – and also in Lewis, you see that the corruption of Narnia and the corruption of Middle Earth in Tolkien begin with man seizing powers that do not belong rightly to him, especially in Narnia.”

“There is magic in Tolkien, but it’s mentioned that Gandalf is called a ‘wizard’ by the ignorant,” said O’Brien. “He is in fact an angel. He’s an angel with a little more incarnate dimension. If you read Lord of the Rings carefully, you will see that magic or the supernatural powers always corrupt man. Gandalf exercises his angelic powers sparingly, only in extreme situations. He does not give these powers to the hobbits or to man or anyone else. He is a moral guardian.”

In Lord of the Rings, said O’Brien, what is called magic by the ignorant is in fact a visible manifestation of divine assistance through angelic help, whereas in Harry Potter, magic is a power that is inherently a right or a property of man and just has to be awakened.

Another of O’Brien’s critiques of Harry Potter is that it’s morally relativistic and “you will find that every Christian virtue is reversed eventually” in a “subtle” way. O’Brien said that although the titular character is noted for his courage, he also lies and cheats throughout the series and that retribution is a recurring theme in the books.

“It would be nearly impossible for us to find … any work of literature or writing that is entirely without some good in it,” said O’Brien.

“Culture is not hermetically sealed component of our lives,” he concluded. “Culture is a powerful influencer of our subconscious attitudes (and) our consciousness.” Consciousness “strongly influences our conscience,” which in turn will affect our choices, he said.