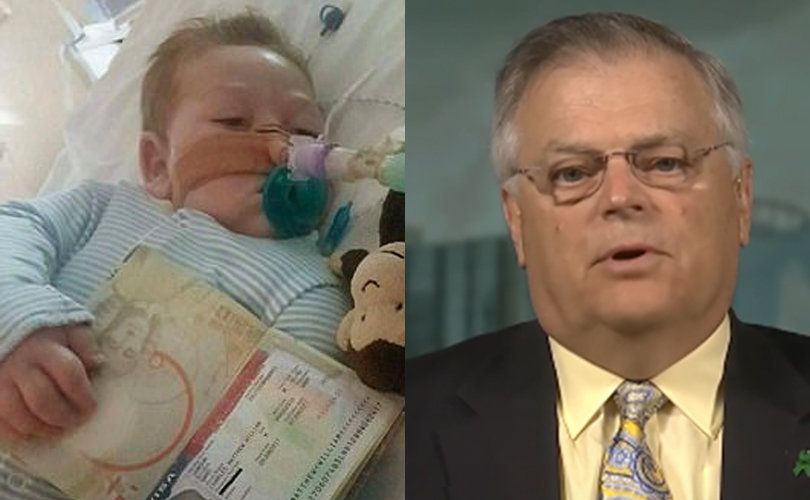 July 6, 2017 (LifeSiteNews) – An American whose daughter had the same condition as baby Charlie Gard and lived to be 15 said Charlie's parents see a “glimmer of hope” and his parents should have the right to pursue it. Charlie's hospital plans to remove him from life support against their will.

“The love that these parents have for this child should certainly supersede the law that’s preventing them from being able to seek that one glimmer of hope for their child,” Mohan told Good Morning Britain anchors and a legal commentator who argued the hospital knows better than the parents.

“Those parents see a glimmer of hope” in experimental treatment, Mohan explained. “And I think we should do everything we can to exercise their right as a mother and a father of this child to seek that glimmer of hope and…to fill that gap that right now is causing them so much stress and so much strain.”

The Daily Mail reported that another American child, six-year-old Art Estopinan, “has virtually the same genetic condition and is fighting it with the pioneering drugs therapy that is being denied to Charlie.”

“We feel very fortunate to be American and not British – because if we lived in the UK, Arturito would surely be dead by now,” his father, Art Sr., said. “We are beyond shocked that doctors in the UK are saying Charlie should 'die with dignity.' How insensitive, when there is a treatment which could save Charlie’s life and eminent doctors in the US who are willing to help him.”

Art's parents say doctors gave him two months to live in 2011. Now, at age six, he is “strong and happy” and can move many parts of his body. When he was a baby, he could only move his eyes.

“We were also told there was no treatment or cure for our son,” said Estopinan.

“I'm not a doctor and I don't know that anyone can identify the level of pain Charlie is in or may be in,” said Mohan. “But we do know that this [experimental treatment] is the only hope that that baby has.”

“The President of the United States and Pope Francis representing 1.2 billion Catholics around the world are in support of this child being given…to the parents so the parents can indeed exercise their God-given right to seek medical attention for Charlie,” Mohan said. “We do know that it’s a very mysterious disease to diagnose and once we do have a diagnosis there are very limited treatments. This is a treatment that exists…as close as Rome for this child…and for the parents to really provide that glimmer of hope.”

1
Pope Francis breaks silence on Roe reversal, criticizes denying Communion to pro-abortion politicians
2
Pope Francis bans priest who publicly challenged him from all public ministry
3
Abp. Viganò: ‘Pride’ movement is satanic, must be conquered by ‘reparation,’ charity
4
Dr. Jordan Peterson promotes homosexual ‘marriage’ and parenting in interview with Dave Rubin
5
Why did the Vatican issue such a joyless statement in response to the overturning of Roe v. Wade?
Subscribe to Daily Headlines »