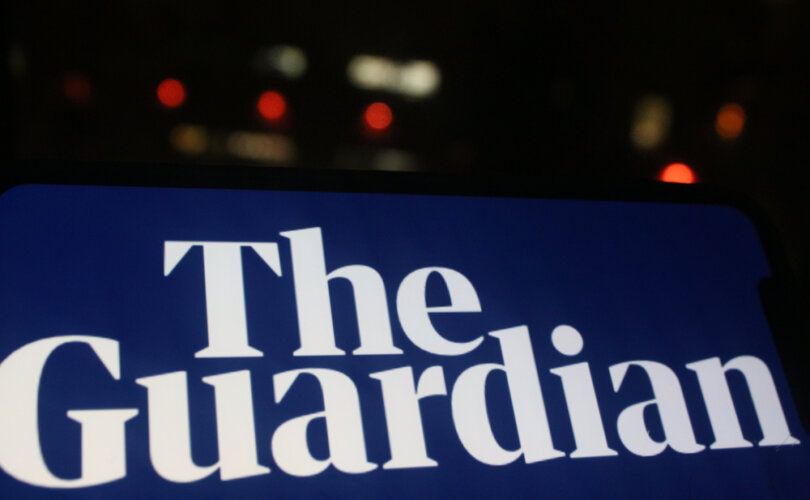 (LiveAction) — A mother who recently miscarried twins at 10 weeks penned a letter to The Guardian in response to its recently published and highly inaccurate article on fetal development — an article that has been labeled as “fake news” by various individuals on social media and criticized by doctors.

The mother has shared an adaptation of her letter with Live Action News, addressing the article, “What a pregnancy actually looks like before 10 weeks — in pictures,” which featured images that were missing the actual pre-born child.

The Guardian published its inaccurate piece about fetal development last month and immediately received harsh criticism and pushback from pro-life and pro-abortion readers alike. It claimed the images it shared from the pro-abortion MYA Network were of “pregnancy tissue” or a “gestational sac” with “no visible embryo,” and that it was sharing them to counter “misinformation” about life inside the womb. But evidence shows that it is The Guardian and MYA Network that are spreading misinformation, and the news outlet appears to be contradicting its own reporting from 2009.

Dr. Christina Francis, an OB/GYN and chair of the American Association of Pro-life Obstetricians and Gynecologists, called the outlet’s images “intentionally misleading,” adding, “They state that they are pictures of gestational sacs, ignoring the inconvenient fact that in pregnancy, the gestational sac surrounds the embryonic or fetal human being — which have clearly been removed before these photos were taken.”

The backlash from readers came quickly following the article’s release on social media.

“… Where is the fetus in any of those pictures?? If you truly support all that abortion involves, then you should not have anything to hide and should embrace EVERYTHING about it,” @merryfull1 wrote.

This is the most ridiculous “article” that I have ever seen. And frankly, misinformation. Where is the fetus in any of those pictures?? If you truly support all that abortion involves, then you should not have anything to hide and should embrace EVERYTHING about it.

“That’s just tissue and an empty sac. It wouldn’t be a pregnancy without the embryo. Why don’t your photos include the embryo? I suspect it’s so that it resembles the ‘clump of cells’ you like to talk about rather than the developing human it actually is. Misleading photos!” tweeted @jrjuara.

That’s just tissue and an empty sac. It wouldn’t be a pregnancy without the embryo. Why don’t your photos include the embryo? I suspect it’s so that it resembles the “clump of cells” you like to talk about rather than the developing human it actually is. Misleading photos!

Yet the most powerful responses came from parents who shared images of their miscarried babies at or about the same gestational age that The Guardian claims its photos represent. One mother, Maria, sent a letter to the MYA Network and The Guardian this week after miscarrying 10-week twins, Amanda and Jireh, noting that the misleading images the news outlet shared could prove dangerous.

“The images presented in the [G]uardian and on this link https://myanetwork.org/the-issue-of-tissue/ are potentially misleading and dangerous. If your aim is to protect women’s health it is imperative that you provide accurate images AND acknowledge that there is a wide variety in how a pregnancy could look at those stages depending on whether it is a normally progressing pregnancy,” wrote Maria.

She noted that such images could lead women to believe their at-home abortion is complete when it isn’t — which can cause a life-threatening infection if not caught in time. The abortion pill carries a risk of incomplete abortion with 2–7 percent of women needing a follow-up surgical abortion to end their pregnancy or to stop too much bleeding, according to GenBioPro, the manufacturer of generic mifepristone, one of the two drugs used in the abortion pill regimen.

Thirty-one-year-old Sarah Dunn died after taking the abortion pill in the U.K. in March, 2022. It has been confirmed that her death was due to sepsis caused by the abortion pill. The abortion pill has actually been found to be four times more dangerous for women than a first-trimester surgical abortion.

Maria continued, “The images you provided are simply images of sacs. The embryo at 9 weeks (which is actually called a fetus at 9 weeks, as I’m sure you know) is absolutely easily visible to the naked eye. A quick [G]oogle search reveals that the fetus is about an inch long, has discernible limbs and facial features taking shape, etc. The fetus is also developing a placenta at 9 weeks. Anyone miscarrying or doing an at home abortion at 9 weeks should absolutely expect to see and confirm that they are seeing FAR more than what you pictured on your website or in the [G]uardian.”

Maria noted in the letter that whether or not a person is excited about being pregnant does not change fetal development. What an embryo or a fetus looks like does not change based on a person’s feelings about life inside the womb or about abortion.

“The only way an embryo would not be visible to the naked eye with [an] 8 or 9 week pregnancy would be if it was destroyed and dismembered during the [D&C procedure], if the ’embryo’ was actually a blighted ovum or if the embryo had stopped growing quite a while before 9 weeks. You know that and so does anyone who has miscarried a pregnancy at this time,” wrote Maria.

A D&C or aspiration abortion is a first-trimester surgical procedure during which the abortionist uses suctioning equipment to rapidly and powerfully pull the embryo or fetus from the uterus at a force so strong that the baby is torn to pieces. An embryo and fetus would likely not be distinguishable because their body has been destroyed, though their arms or legs and potentially other body parts may be intact enough to be recognizable.

In her letter, Maria included images of her own baby girls and warned MYA Network and The Guardian that the women they are misleading might one day see their own babies after tragically taking the abortion pill, believing that no such baby existed.

“I was able to count 20 fingers and toes on my ’tissues.’ This is what someone performing an at home medical abortion or experiencing a miscarriage at barely 10 weeks should expect to see,” wrote Maria. “I also delivered a fairly large placenta and a lot of other tissue. It was a difficult process and I needed help. I cannot imagine how deceived or ill prepared I would feel if I had been expecting what your images portrayed for a 9 or 10 week pregnancy. It could be very dangerous if someone thought their miscarriage or medicinal abortion was complete based on your misinformation. I hope women take their medical advice from real doctors and not from ‘activists’ and journalists, but you cannot count on that.”

From the first moment of fertilization, a unique and new individual has been created. That person will grow and develop quickly, with a heart that begins to beat as early as 21 days and brain waves recordable at six weeks, according to the Endowment for Human Development. At nine weeks post-fertilization, a pre-born human being can suck his or her thumb, sigh, and stretch, and is sensitive to light touch. The pro-abortion media does a great disservice by not informing the public of these facts.

Maria told Live Action News via email: “We chose the name Amanda because it means ‘worthy of love,’ and she was. We chose the name Jireh because it means ‘The Lord will provide.’ It was difficult to share private images of our very loved babies. We have no need to validate their beauty, humanity, and value to anyone who has shut their eyes to it. But with just a few short weeks of life, they have a voice to speak truth and light. Perhaps they were here on earth for such a time as this.”