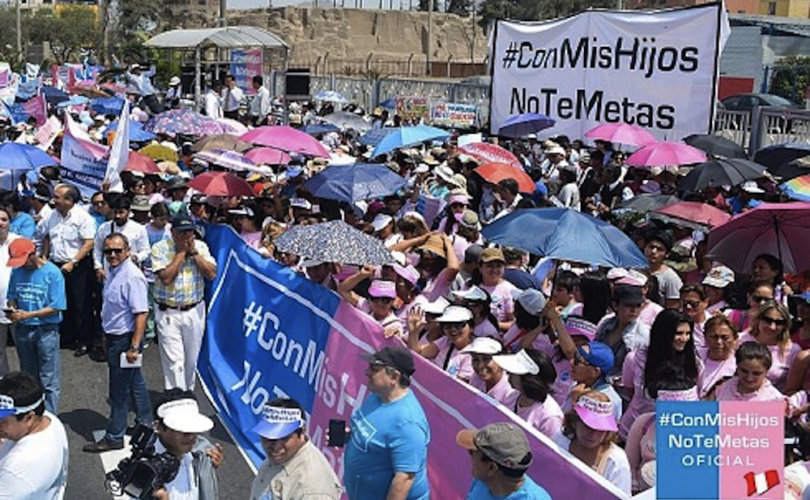 September 1, 2017, (LifeSiteNews) – An association of parents in Peru has scored a victory in a crucial lawsuit to stop the government from indoctrinating their children in gender ideology, according to local media sources.

The first civil chamber of Lima’s Superior Court of Justice sided with the group Parents in Action (Padres en Acción) and nullified part of the Ministry of Education’s “National Curriculum of Basic Education,” which encourages teachers to present “gender” as a psychological construct.

The court nullified a passage in the curriculum that reads, “Although that which we consider to be feminine or masculine is based on a biological sexual difference, these are notions that we are constructing day by day in our interactions.”

The court ruled that the statement violates the country’s General Law of Education, which requires educational policies to be developed “in cooperation with the State and with society,” and that “society has the right and the obligation to contribute to the quality and the equity of education.”

The court’s ruling urges the Ministry of Education to create a “a specific, democratic, deliberative, transparent, and effective mechanism” enabling parents and the society in general to “participate in various ways in the formulation of public policies in education.”

“We won the lawsuit! A day to celebrate #TheRightofParents (#DerechodePadres) to intervene in the education of their children,” announced Parents in Action on its Facebook page.

“We reiterate our request to the Ministry of Education to immediately halt the arbitrary ideological indoctrination of children,” the group stated, calling on the ministry to start a dialog “with parents and civil society to define an approach to sexuality based on reality, science, virtue, and the culture of life and family that is part of the cultural identity of the majority of Peruvians.”

The ruling follows a previous tussle between the Ministry of Education and pro-family activists in 2016, which resulted in protests outside the Ministry facilities and led to a retraction of an education plan for 2017 that included gender ideology

Despite the language in the current National Curriculum of Basic Education, the Ministry of Education claims that it doesn’t teach gender ideology, and has previously stated its intention to appeal if the court rules against it, although there are no reports as yet regarding such an appeal.