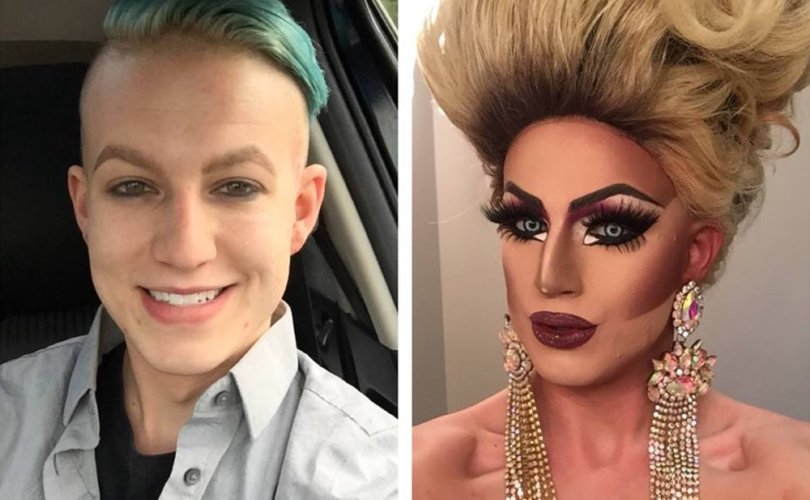 THORNTON, Colorado, October 26, 2018 (LifeSiteNews) – Parents were shocked and angered to discover that an x-rated drag queen showed up to their children’s school last week as part of a career day event.

Zack Sullivan, a 25-year-old man better known as drag queen “Jessica L'Whor,” was invited by school administration to give a presentation on Oct. 19 to 11-13-year-old children at Rocky Top Middle School in suburban Denver, without parents' knowledge or consent.

L'Whor has worked for x-rated “uncensored” venues, one which included allowing patrons paying the highest bid to “f*ck up the queens.”

“Parents are in an outrage and this is so inappropriate on so many levels,” a parent told CBS4 Denver.

Dozens of parents are now banding together to meet with the Adams County School District 12, commonly known as the Adams 12 Five Star Schools, to stop future visits to the school by drag queens, said parent Jen Payer in an interview with LifeSiteNews.

“I'm appalled that the principal allowed someone to come into our school and have our kids come home and Google who this person is,” said Payer. “It's absolutely not okay, not morally or ethically.”

In a letter sent to parents Monday after the event, Rocky Top Middle School principal Chelsea Behanna dismissed the furor as being due to objections by only a “handful of people.”

But Payer claims many more parents than that are disgusted by what happened.

“There is a large group of parents that is going to go before the board of directors to ensure that this does not happen again,” she said.

Adams 12 Five Star Schools communications manager Christina Dahmen also downplayed the issue Wednesday, insisting it is the result of nothing more than having failed to advise the parents of the list of guests for the Rocky Top Speaks event ahead of time.

“The overwhelming response was that parents want to be informed of all speakers – which we agree with as a district,” said Dahmen in an interview with LifeSiteNews. “All we heard is that parents wanted to know who was invited … and maybe have a conversation with their child ahead of time.”

Not so, said Payer.

Parents of Rocky Top Middle School students were outraged that what they saw as an adult performer, a man cross-dressing in women's clothing, going by the name Jessica L'Whor – which sounds like “whore” – and who has worked at one of Hamburger Mary's LGBT-themed restaurants as the host of drag shows, was invited to be a role model for their children, said Payer.

According to her, drag queens are not age-appropriate for 11-year-olds.

In the mainstream media, Sullivan has repeatedly appeared in full drag with TV hosts and reporters referring to him as “her” and “she” and calling him “Jessica”. On Daily Blast Live, he appeared as Jessica for the show's 5th segment and defended his decision to go into the middle school.

“Any drag queen would vouch for the idea of going into any environment that especially has young minds and being able to talk with them, answer questions, and just have conversations with any age group,” he said.

On that show, Sullivan also maintained his stage act is not sexual. On Twitter, his profile describes him as the “Biggest L'Whor in Colorado!”

And on the TV show, Sullivan said he chose to not use his drag queen persona's last name, L'Whor, during his visit to the middle school because it would not be age appropriate.

According to Payer, the drag queen's reluctance to use his full stage name seems like an indicator that he realizes what he is doing is morally sketchy.

At Adams 12 Five Star Schools, communications director Joe Ferdani told a TV news crew on video, “The school's focus is to have an event that is representative of the diverse backgrounds and careers within their community.”

Parents are now wondering whether school officials deliberately withheld information that a drag queen was invited to the career day, knowing there would be a backlash.

“They were trying to keep the attendance up that day,” said Payer. “If people know what was coming up, I bet half of the kids would be out of school that day.”

Respectful comments about the Rocky Top Middle School's invitation of a drag queen to its literacy day event can be sent to Dahmen, the school district's communications manager at [email protected].