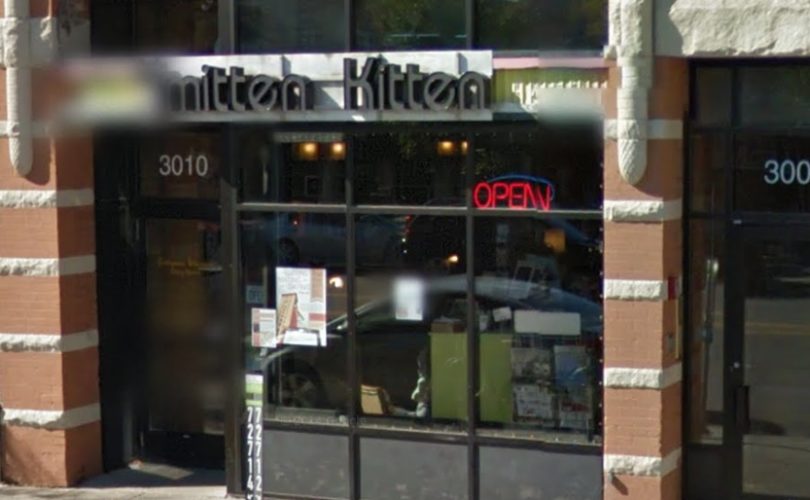 Smitten Kitten in Minneapolis, where the school took students as young as 11 years old for a sex-ed 'class.'

Minneapolis, MN, June 3, 2015 (LifeSiteNews.com) – Parents in Minnesota are outraged after learning that a school sex education teacher took their pre-teen children to a sex toy store without parental consent.

Last week, the director of Gaia Democratic School – a small, private K-12 school – took approximately a dozen students as young as 11 to an establishment known as the Smitten Kitten. Describing itself as “a progressive sex toy store for everyone,” Smitten Kitten showed students its variety of sex toys, though it says it took its pornography section down during the visit.

Now, Lynn Floyd and his ex-wife have removed their three children from the school. Floyd told the Star-Tribune that he was unaware of the trip, which his older daughters, aged 11 and 13, attended.

The Star-Tribune reports that Gaia has approximately 25 students, “including several described by administrators as transgender.” The school is inside Minneapolis’ First Unitarian Society building, and its mission statement says, “We believe in academic freedom, youth empowerment, democratic education, and environmental stewardship.”

While Gaia did not return LifeSiteNews' request for comment, the school's director defended the trip even as she said “it will probably be our last.”

Director Starri Hedges, who also teaches the school’s sex education class, said she wanted to provide a safe and welcoming environment for students to learn about human sexual behavior.

“What I saw happening on our trip, I thought it was beautiful because kids could talk to these sex educators without any shame, without any fear,” Starri Hedges told The Star-Tribune on Monday. “The sexual health aspect, there is no right age for all kids. You can't say, ‘All kids should know this at this age.’ There are students that are already going through puberty at 10 or 11.”

Hedges said that multiple students bought condoms at the store.

They sat at the front of the store in a library section, she told The Star-Tribune, and products seen as pornographic were off limits.

Given the reaction, however, Hedges said, “It was certainly the first time we have taken that kind of field trip and it will probably be our last.”

Hedges added, “I feel bad, because the kids had so much fun.”

It's not just Gaia that is facing trouble due to the visit. Smitten Kitten, which says on its website that “everyone is welcome,” may have broken the law by allowing minors in the store.

The Star-Tribune notes that a license and zoning inspector was sent to the store, which “was issued notices for having sexually explicit materials that were not in a separate section of the store.”

But city officials levied no fine. Instead, they told the store to fix the problem.

In a statement, owner Jennifer Pritchett said that “we leave it up to the discretion of parents and guardians as to when, and in what capacity, they seek resources from our educators.”

Smitten Kitten promotes itself as an educational location on its website. It also explicitly encourages “people of all genders, orientations, ages and abilities…to come, regardless of relationship status or style.”

“Events are non-explicit and non-sexual. All demonstrations and other learning tools, images and props are of an educational nature,” according to its website.

One of its upcoming events is entitled “Lusting, Mating and Dating At Any Age,” and appears to be geared towards senior citizens.

“You’re ready to connect with the right person (or persons) for dating, sex, love, companionship – so how can you choose other singles who attract and interest you?” the event description asks. The instructor is an author of three explicitly titled books about sexual activity among older people.

Smitten Kitten did not return LifeSiteNews' phone call about its educational programs.