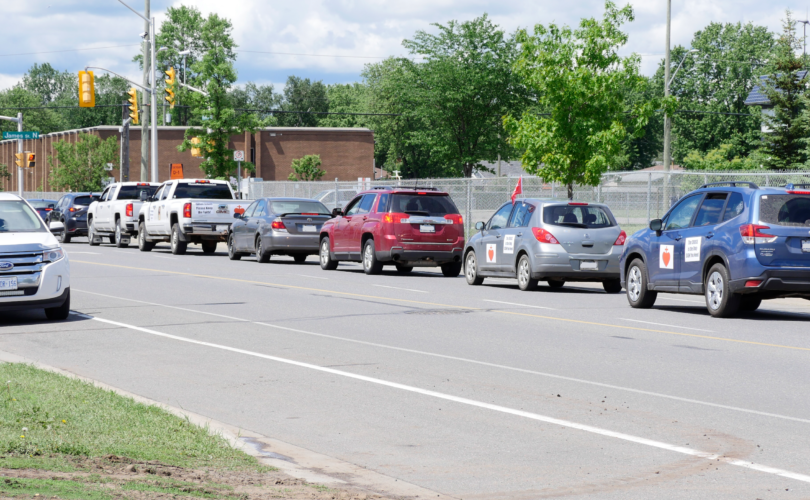 Monday’s car rally took place at 1 pm in front of the Catholic School Board’s head office in Thunder Bay. “This rally sends a direct message to Catholic trustees and educators that Pride flags and Pride month education are not in line with the teachings of the Catholic Church and do not belong in these schools,” said PAFE President Teresa Pierre PhD. “Parents are furious with this blatant disregard for children.”

TBCDSB has partnered with Thunder Pride, which organized a counter-protest for the June 1st event. One PAFE car rally participant, a retiree from TBCDSB remarked, “As we drove by, some of the counter-protesters, who stood in front of the TBCDSB office, shouted rude remarks, swore at us, and held signs that insulted Jesus and the Catholic faith. All of the PAFE signs were positive, focusing on the month of June being dedicated to the Sacred Heart of Jesus and the importance of the Cross of Christ, which for Christians are signs of love that cannot be surpassed by any other.”

“Catholic schools must adhere to the teaching of the church, otherwise they are giving them a false illusion of the Catholic faith,” said Pierre. “Despite guidance from the Cardinal of Toronto that the acceptable symbol of inclusion for a Catholic board is the Cross, many schools have decided to ignore this guidance and fly the flag, ignoring the impact it will have on Catholic students in these schools.”

Published with permission by Parents as First Educators