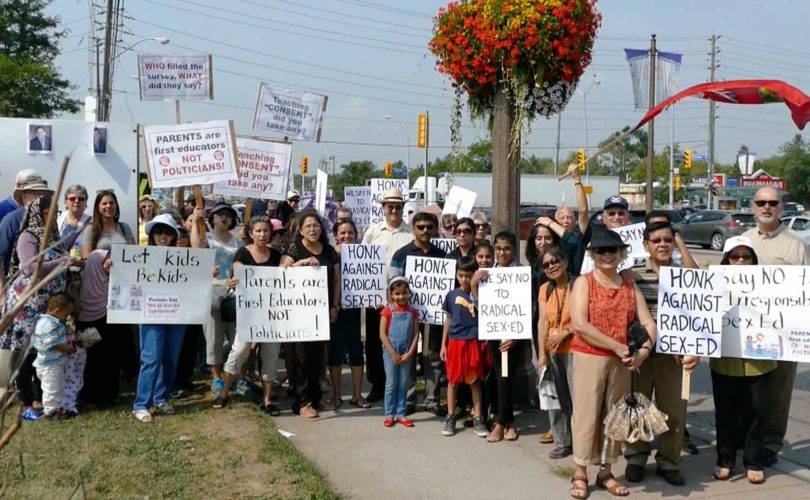 SCARBOROUGH, Ontario. September 1, 2015 (LifeSiteNews) – Concerned parents and others protesting at the office of Scarborough Centre Liberal MPP Brad Duguid against the government’s school sex-ed curriculum got a very cool reception from Duguid rep Scott Cavalier.  However, that was markedly contrasted by frequent honks of support and thumbs up from vehicles passing by on busy Lawrence Ave. E. The emphatic praise from numerous cars and large transport trucks came in response to signs worded, “Honk Against Radical Sex-Ed”.

The Scarborough Centre protest was one of over 100 that that took place at MPP constituency offices across Ontario from 11 a.m. to 12 noon Wednesday organized by Campaign Life Coalition together with the member organizations of the Canadian Families Alliance.

The numbers in Front of Duguid’s office continued to build from 11 a.m. onwards, eventually reaching a maximum of 91 participants of all ages and cultural and ethnic origins.

A CP24 television truck and camera crew stayed throughout the protest conducting several live interviews with different participants during the hour’s activities. Participants remarked that they were astonished by the strong support they were receiving from the public. That indicated to them that a majority of citizens in the region opposed the Wynne government’s planned radical sexualization of the province's children.

A small delegation with Scarborough Centre demonstration coordinator Carmen Debono was allowed to enter the front of Duguid’s office to present material for Duguid to representative Scott Cavalier since Duguid was not present. Debono read a portion of a statement for the MPP explaining the reasons for their opposition to the sex ed program.

“before I describe those concerns, I’d like to respectfully remind you that you were duly elected to represent your constituents. That means representing all of us concerned parents, grandparents and the thousands more who could not be here today. You are not the Party’s representative to this riding. You are our representative to Queen’s Park.”

We are here to request that you oppose the sex ed curriculum as publicly and as vigorously as possible.  We’re asking you to work towards its repeal in the Legislature, even if that means bringing it up at every turn, all the way to the 2018 election, to ensure it becomes the main ballot issue at that time.

Debono then addressed what are considered serious flaws and dangers of the program,

We are here with heavy hearts. Heavy with concern for our children and grand children, whom we know will be sexualized by a flawed and reckless curriculum that is driven by the ideologies of people like Ben Levin (convicted child pornographer and pedophile) and Planned Parenthood, NOT by science.  We know that much of what’s in the Sex Ed program totally contradicts the guidelines for healthy, age appropriate information as established by reputable child and adolescent psychiatrists.

This curriculum will NOT increase child safety. It will make them MORE UNSAFE. Nor will it reduce their risk for sexually transmitted diseases. Instead, it will increase their risk for STIs, by nudging them towards premature sexual experimentation, and by withholding facts about the risks of certain sexual behaviours.

Among several specific details about the curriculum noted by Debono, a few were,

In Grade 3, children will be taught the disputed theory of gender identity, as if it were fact! Eight yr olds will be taught that whether you're a boy or a girl does not necessarily relate to your physical anatomy. It’s merely a social construct! Gender is fluid. And you can choose your own gender!  This flawed theory will produce serious sexual confusion in the minds of the young

In Grade 8, the teacher may recommend that students, as young as 13 years old: “Make a personal plan” about your “sexual activity”. The teacher is to help students make a sexual plan for themselves, to help them decide how far they're willing to go with sexual activity, and then “stick to what I had planned”.  Again the undertone here is permissive. It will be perceived by many kids as giving license to become sexually active.

Debono, on behalf of the families of the Scarborough Centre concluded,

…opportunity for meaningful parental input (into the program) never took place. Parents still aren’t comfortable with it.  Kathleen Wynne is ramming this unpopular curriculum down the throats of parents.  We ask you, for the sake of innocenent children, please protect them from being sexualized by this irresponsible sex curriculum.

During the reading, Duguid representative Scott Cavalier said very little and was quite cool to Debono and his small delegation allowed only just inside the entrance door. Cavalier declined to  get into any discussion about the curriculum other than to say he would pass on the concerns to the MPP who is currently the Minister of Training, Colleges and Universities for the government.

Back on the street, protesting families began to cluster and chant, “we say no, we say no” to the radical sex ed program that they feared would cause harm to many children and potentially damage the unity and lives of families in the province.