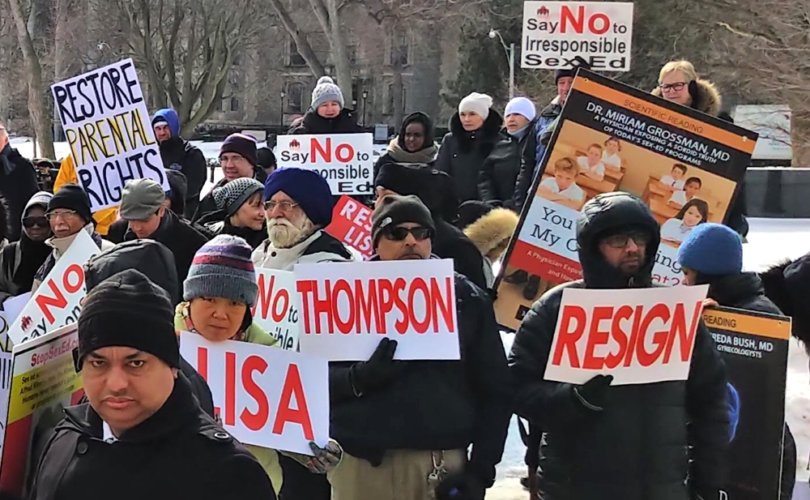 TORONTO, February 21, 2019 (LifeSiteNews) – Doug Ford’s education minister has failed to deliver on the Ontario premier’s campaign promise to repeal the Liberal sex-ed curriculum, and has to go.

That the message came loud and clear from speakers at a Queen’s Park rally Wednesday organized by the Canadian Family Alliance, a grassroots coalition of parents’ rights groups.

“Despite the many promises, nothing has been repealed! Nothing!” added Granic Allen, president of CFA member Parents As First Educators and former PC Party leadership contender.

The estimated 250-plus crowd braved what one described as “really cold” weather to wave signs and break into chants of “Hey hey! Ho ho! Lisa Thompson’s got to go!” and “Lisa Thompson, hear my voice! It’s my child and my choice!”

“Children should learn to value people for their good character and not their sexual lifestyle or their outward appearance,” Lee pointed out.

“Using diversity, inclusiveness and equity as an excuse to change societies’ views on sexuality by targeting the younger generation is a principal of Marxism,” said Lee.

The CFA represents some 200,000 Ontarians and formed in 2015 when Liberal Premier Kathleen Wynne rolled out the controversial sex-ed curriculum despite unprecedented and massive parental backlash.

“Unlike never before we see an agenda, a new sex-ed used to promote risky promiscuous relationships to children and teens,” Lee told the crowd.

Politicians and teachers have “all forgotten that you are in a position of trust and service to us and are being paid by parents, the taxpayers, and not special interest groups,” she said.

“This curriculum excludes the virtue of love, commitment, self-control, faithfulness and marriage.  Marriage is the foundation for healthy relationships and a strong society!” added Lee.

Thompson’s lawyers “and her own assistant minister of education have declared in recent court proceedings that the Wynne sex-ed can still be used,” Granic Allen pointed out.

“Any subject matter from any grade level.”

Perhaps the “most contentious to parents” is that Ontario teachers “spin the leftist, unscientific propaganda known as ‘gender identity theory’ in the classroom,” the mother of four told the crowd.

Ford repeated in his throne speech his campaign promise “to respect parents by repealing” the sex ed, he told the crowd.

Thompson’s interim curriculum contains reference to gender ideology “not less than eight times,” he pointed out.

The parental consultation process was a further betrayal, he contended.

Ford “promised we would have physical, in-person consultation meeting in every riding in the province”, Fonseca said.

“What we got instead was an easy-to-cheat, online mechanism which appears to have been designed so that it could be easily hijacked by the far-left teachers union and radical sex activists.”

The Elementary Teachers’ Federation of Ontario and the Canadian Civil Liberties Association is challenging Ford’s sex-ed repeal in court.

Moreover, several individuals have filed complaints with the Ontario Human Rights Tribunal that repealing the sex-ed discriminates against LGBTQ persons.

Fonseca called on the Ford government to invoke the notwithstanding clause if it loses the court challenge against the sex-ed repeal, and to abolish the Human Rights Tribunal.

Queenie Yu, founder of the Stop the Radical Sex-Ed Party emphasized that Ford’s promise to repeal and replace the sex-ed curriculum was key to his winning the Progressive Conservative Party leadership race.

“Thanks to the thousands of parents and supporters who joined the PC Party and voted in the PC leadership, we elected a leader who promised to repeal and replace the Wynne sex-ed!” Yu said.

CFA has also maintained Ford’s promise to repeal the sex-ed had much to do with his landslide victory in Ontario’s June general election.

Yu urged parents to keep up the fight for the sex-ed repeal.

“Dr. Jordan Peterson said that one of the first steps leading to totalitarianism is self-censorship – being muzzled,” said Yu, referring to the Toronto psychology professor who shot to fame for opposing the Trudeau Liberals’ federal bill codifying gender theory into law.

“As a result, their character weakens. And people with a weak character can be manipulated and controlled by anyone.”

MPP Monte McNaughton “walked past the rally as he left Queen’s Park,” one rally participant told LifeSiteNews. “Unlike four years ago when he ran for leader, he didn’t join the parents.”

As for Minister Thompson, she was nowhere to be seen, nor has she yet responded to CFA’s concerns.

Thompson’s office did not reply to LifeSiteNews’s request for comment.

Ford’s spokesman Simon Jefferies did not respond to a request for comment from LifeSiteNews.

Along with CFA’s campaign, a PAFE petition asking for Thompson’s resignation has reached 3,092 signatures so far.

To respectfully express your views on the sex-ed repeal, contact your MPP (for contact information go to Campaign Life Coalition, here) and: