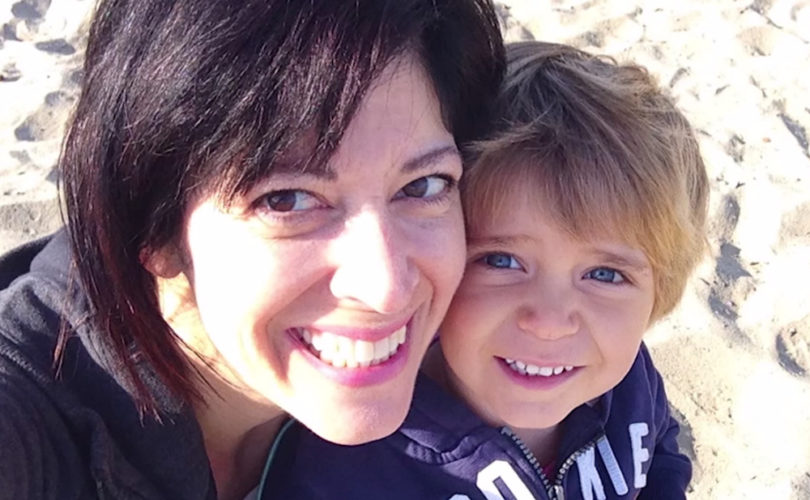 OAKLAND, CA, July 7, 2015 (LifeSiteNews) — An Oakland, California, couple is giving their four-year old son the green light to identify as a girl.

Jack Carter Christian, the son of Mary Carter and James Christian, will now be known as “Jackie” and be allowed to dress and act as a little girl.

The family acknowledged they were already letting the boy wear his older sister’s dresses on a regular basis and also that he liked to wear pink boots. James Christian said he thought for a long time that it was a phase his son would get over.

Carter detailed in an NPR interview the conversation with her son that led to the decision to allow him to live as a girl.

“Jackie just looked really, really sad; sadder than a 3-and-a-half-year-old should look,” Carter said. “This weight that looked like it weighed more than she did, something she had to say and I didn’t know what that was.”

“So I asked. I said, ‘Jackie, are you sad that you’re not going to school today?’ And Jackie was really quiet and put her head down and said ‘No, I’m sad because I’m a boy.’”

Carter continued speaking about the details of the day she encouraged her son to act upon the emotion he’d expressed.

“You’re really not happy being a boy?” Carter queried her son.

“I thought a little bit longer and I said, ‘Well, are you happy being you?’” said Carter. “And that made Jackie smile. And I felt like for that moment that was all that really mattered. That was ‘The Day.’”

It was then that Carter proceeded to a Walgreen’s drug store and purchased elastic hair bands picked out by her son to pull his hair into little ponytails, something that offered apparent satisfaction for mother and son.

“There she was, in these cast-off Little Mermaid pajamas and five pony tails that are sticking out of her head kind, of like twigs, and this smile on her face and I’ve never seen such a happy child,” Carter stated. “To go from maybe an hour before this, this child who looks so sad, to that- pure joy, just pure joy, right there.”

Carter and Christian are one of a number of couples turning up in media stories saying that their young children will no longer live life as their biological gender. The confusion they describe is a disorder classified by the American Psychological Association as gender dysphoria.

San Diego parents Jeff and Hillary Whittington appeared in late May with their six-year-old daughter Ryland, who is identifying as a boy, at the 6th annual Harvey Milk Diversity Breakfast. Milk, the first openly homosexual candidate elected to office in San Francisco as City Commissioner, was also notorious for preying sexually upon underage, drug-addicted, runaway boys, and was murdered by a political rival in 1978.

Massachusetts couple Mimi and Joe Lemay have also decided to allow their five-year-old daughter Mia, now going by Jacob, to live as a transgender child, turning to NBC News with the specifics.

They said an April DailyMail.com report that it was “his” choice to become transgender, and also that they shared their story hoping to prove there is no such thing as “being too young” to identify as transgender.

“I realized he had never really been Mia,” Mimi Whittington said. “That had been a figment of my imagination.”

Author and public speaker Walt Heyer, who underwent sex reassignment surgery to become a woman and then later returned to living as a man, told the Daily Caller children cannot be born as one gender and identify as another by accident. He now performs outreach to those experiencing gender confusion.

“There’s a lot of questions here. Kids are not born transgender,” Heyer said. “Childhood developmental disorder that comes out of some event or series of events or abuse or neglect or trauma or overbearing mother or father or someone or a lot of times it's sexual abuse.”

Heyer said the experience of having parents or caretakers entertain the idea of gender confusion is at issue and this is what happened to him.

“My grandmother kept cross-dressing me and loving on me as a girl and not as the boy God made,” he said.