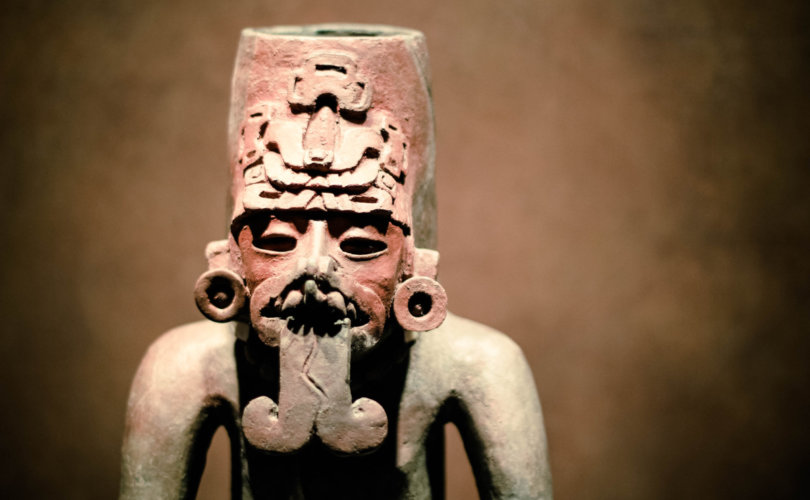 SACREMENTO, California – (LifeSiteNews) On Friday September 4, a group of parents filed a lawsuit against the California Department of Education over the new “ethnic studies curriculum” that requires students to “chant” to Aztec “gods.”

The lawsuit was filed by the Thomas More Society, a not-for-profit law firm dedicated to fighting for the rights of family and religion, on behalf of parents of students, as well as the Californians for Equal Rights Foundation.

The impetus for the lawsuit came after the plaintiffs issued a letter to the State Superintendent of Public Instruction, Tony Thurmond, asking him to remove the pagan chanting from the curriculum. The letter, dated August 24, went unanswered.

On legal grounds, the suit cites that, “[f]ree exercise and enjoyment of religion without discrimination or preference are guaranteed” under California law, and “the Legislature shall make no law respecting an establishment of religion.” “Additionally, government aid of religion is prohibited,” it added.

More specifically, “Both the U.S. and California Supreme Courts have made absolutely clear that prayer in public schools is prohibited,” and “Prayers drafted by public school officials are doubly prohibited,” reads the filing.

In laymen’s terms, both federal and state law disallow the promotion of all religions, including ceremonies, prayers, and doctrines, in any publicly-funded school, according to the lawsuit.

The demonic chanting, which is part of the “Ethnic Studies Model Curriculum,” was initially a voluntary program, but according to the Christian Post, many school districts have allowed the integration of the chanting into the classrooms of all students.

Included in the chant is asking the “gods” for “liberation, transformation, decolonization,” of America.

— Article continues below Petition —
PETITION: Ban COVID vaccine mandates for schools and universities!
Show Petition Text
42757 have signed the petition.
Let's get to 45000!
Thank you for signing this petition!
Add your signature:
Show Petition Text

“Our clients have both a religious and civic objection to the Aztec prayer, and they do not want their children chanting it, being asked or pressured to do so, or risking ostracism if they refuse,” said Thomas More Society lawyer Paul Jonna.

The radical curriculum is not just a method of “inclusion” but carries with it explicit and overt anti-Christian sentiment.

The curriculum encourages teachers and students to “challenge racist, bigoted, discriminatory, imperialist/colonial beliefs” of which Christianity is considered a part.

His book states that White Christians are responsible for committing “theocide” and replacing indigenous “gods” with Christianity. Due to this understanding, Cuauhtin claims people must work to “decolonize” America, through a method he refers to as “countergenocide.”

According to Cuauhtin, if Christianity can be successfully dismantled in American society, it will make way for a “regeneration of indigenous epistemic and cultural futurity.”

On religious grounds, chanting to, or revering, any “gods” other than the Christian God, is prohibited in the Bible, per the dogmatic teachings of the First Commandment.

The authentic teaching of Christianity, as affirmed by the Baltimore Catechism, states, “The first commandment of God is: I am the Lord thy God; thou shalt not have strange gods before Me,” and therefore, “By the first commandment we are commanded to offer to God alone the supreme worship that is due Him, ‘It is written, The Lord thy God shalt thou worship, and him only shalt thou serve.’ (Luke 4:8).”

The curriculum, which formally invokes “Aztec gods” with the goal of usurping the worship due to God alone, “constitutes an unlawful government preference toward a particular religious practice,” said Frank Xu, president of Californians for Equal Rights Foundation.

“This is all so comprehensively evil and destructive it is hard to know where to begin criticism of this dangerous, divisive, retrograde cultural vandalism. The idea that a tax-supported public school system would, or could, be used to unleash this vicious cultural and spiritual poison into our young people’s consciousness is both extremely offensive and quite possibly illegal,” said Dr. Richard Land, executive editor of the Christian Post.

As stated by Pope St. Pius X, “The primary duty of charity does not lie in the toleration of false ideas.”