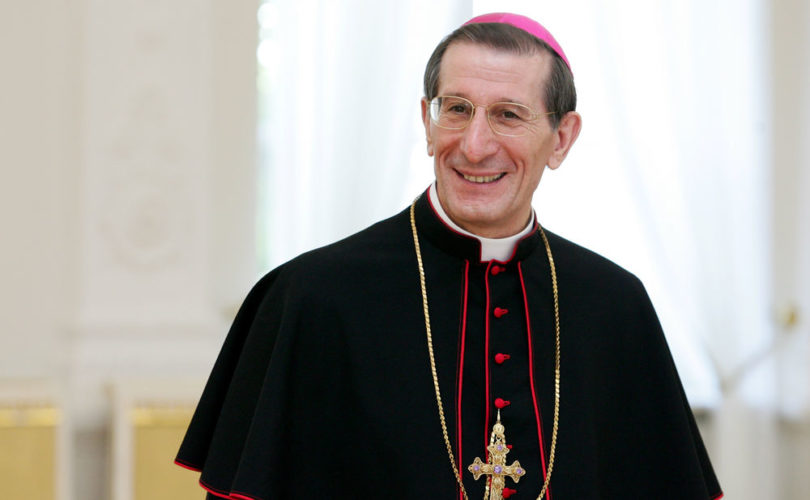 OTTAWA, May 8, 2015 (LifeSiteNews.com) — A group of Ontario Catholic parents launched an appeal Monday to Canada’s papal nuncio, asking for a stronger Catholic response against the Liberal government’s controversial sex-ed curriculum and stating that “orthodox faithful Catholics” have “little confidence” in Ontario’s bishops.

After an overwhelming response – 1,132 signatures by mid-day Wednesday – the group has extended the deadline for signing the letter, available on googledocs, to May 12, and is aiming for 5,000 signatures. (The tally Friday at noon was 1,421.)

“No Catholic School Board in Ontario is legally required to implement this particular curriculum,” the letter asserts.

But more significantly and troubling for Catholics, the letter excoriates the Ontario bishops’ current family life program, Fully Alive, for being “unacceptable” and “sexually graphic,” and describes the state of the province’s Catholic schools as “atrocious.”

“I just want to stress that the letter to the nuncio is not an attack on the Church. I love the Church,” Anna Tota, the Oshawa mother of four who spearheaded the project, told LifeSiteNews. “We need our local church to work with us, we know that we cannot do this on our own, nor do we want to. We have to stand united; church leaders and the lay faithful. We need and want their support.”

But Tota was admittedly “disappointed, very disappointed” at the response of Toronto’s Cardinal Thomas Collins to the Liberals’ radical sex-education curriculum.

Collins announced February 24 that the Institute for Catholic Education (ICE) would produce resources for Catholic educators to teach the sex-ed curriculum through the “Catholic lens” of Fully Alive.

Tota thereupon promptly fired off a letter to the cardinal March 4, describing the dangers of Fully Alive.

This January, after homeschooling for three years, Tota enrolled her three oldest children, now aged 11, 10, and 8, in St. John XXIII Catholic School in the Durham Catholic District School Board (DCDSB). When her son Michael brought home a Grade 6 Fully Alive textbook, she was shocked to see it included, among other objectionable material, an explicit description of sexual intercourse, and the three stages of labor.

Again, no acknowledgement or response from the cardinal was forthcoming. Of the others, only Anne O’Brien, St. Gertrude Parish, and Bob Camozzi acknowledged receipt of Tota’s letter, but only after she resent it April 8 to all parties, pleading for a response.

That’s when Tota, and her husband Christopher, after a great deal of prayer and on the counsel of a spiritual advisor, decided that, “We’ve got to take this higher,” she told LifeSiteNews.

The project snowballed from there. Tota has been logging in 18- to 20-hour days in the last few weeks on the letter, a collaborative effort she says has “gone through a good 20 hands” of “faithful Catholics,” including close friends and family.

With their help on countless revisions, the wide-ranging epistle has been distilled into “cold, hard facts” backed up by 19 references, which detail the dangers of the looming ministry sex-ed program, the state of Ontario’s Catholic schools, and profound flaws in Fully Alive.

The letter states that “orthodox faithful Catholics have very little confidence in the ICE or the Assembly of Catholic Bishops of Ontario (ACBO) in this regard due to the implementation of the existing, sexually graphic Fully Alive program, already unacceptable, forcing faithful Catholic teachers, despite their discomfort and disapproval, to teach that program.”

It also asserts that, “some of what our Bishops have already implemented and allowed in the Catholic schools during the past 25 years has undermined and continues to undermine the sanctity which faithful parents are trying to instill into the lives of our children.”

“Where they should be supporting parents and standing together with the parents against the evil indoctrinations, they are not.”

Tota said she felt like giving up many times but her spiritual advisor told her to keep going, and to gather signatures, pointing out that “one lonely voice can be silenced.”

She was also “afraid, to be honest” at the idea of speaking out against Fully Alive, a Grade 1 to 8 program crafted under the bishops’ direction.

But her spiritual advisor’s gentle encouragement, her husband’s support, the help of her close allies, and her conviction that Catholics appalled by the Liberal sex education curriculum had “no defense” in Fully Alive, kept Tota and her collaborators going.

Ultimately, Tota says, the letter stemmed from the group’s “love for God,” for their kids, and for the Catholic Church.

“We want our Shepherds to stand with us, we pray for them, we want them to lead us,” she emphasized, “Yes, we are disappointed, absolutely, but we must find a solution together.”

The letter to nuncio Archbishop Luigi Bonazzi can be found here.

Those who wish to sign the letter can do so here.