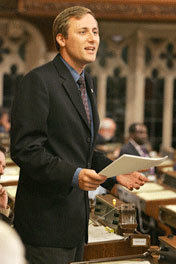 Updated Sept. 23 with link to video highlights of rally.

Brown was decried for betraying parents on the issue and Wynne for dictatorially trampling on parents’ fundamental rights as their children’s primary educators by implementing the sex-ed curriculum in all publicly funded schools in the fall of 2015 despite an unprecedented public outcry.

“It used to be that parents only had to face one tyrant inside that building, Kathleen Wynne, who devised this perverse curriculum,” Campaign Life Coalition’s Jack Fonseca told the rally. “Now she’s joined in her tyranny by Patrick Brown.”

“How many people here are absolutely astonished that he got elected with your vote … then turned around and backstabbed you and betrayed your children?” Fonseca questioned. “We need him to step down. We need a leadership review.”

Indeed, the rally comes two days after CLC released to the media an April 2015 email from Brown during his run for PC leadership in which he assured Fonseca he would “repeal” the sex-ed curriculum.

More recently, an August 24 letter in English and Chinese bearing Brown’s signature and stating he would “scrap” the sex-ed curriculum was circulated during the Scarborough Rouge-River byelection.

But Brown has since infamously flip-flopped, disavowing the byelection letter and even knowledge of it, and responding to his 2015 email to CLC’s Fonseca by declaring Monday on Facebook that though he “deplore[s]” the lack of parental consultation, he supports the Liberals’ sex-ed curriculum. His earlier views were “mistaken” and have “evolved.”

“We supported him,” Charles McVety of the Institute of Canadian Values told the Queen’s Park rally. “I paid my 10 dollars, I voted for him, I brought many other people to do the same thing. I want my 10 dollars back because it was taken from me in a fraudulent manner.”

Brown is “no longer sure these days whether he’s a Conservative or a Liberal, as he spends most of his time defending Kathleen Wynne’s disastrous policies,” Fonseca told the crowd.

Anger at Brown, Wynne, and the Ontario government’s perceived attack on parental rights ran high at the rally, with chants of “Shame! Shame!” punctuating speeches during the two-hour event organized by the Canadian Families Alliance, a coalition of grassroots parental rights’ associations.

Indeed, the attack on parental rights and children was compared to Canada’s history of residential schools, during which all political parties endorsed the seizure of aboriginal children from their parents to be placed in state-funded boarding schools.

“The ultimate underlying issue here is your civil rights,” Saskatchewan Conservative MP Brad Trost, a leadership contender for the Conservative Party of Canada, told the rally. “It’s about the rights of parents to be able to decide what is right for their children.”

“We in Canada, when we have taken those rights from parents, we have had a disaster each and every time,” he added.  “The most tragic incident in our history was the residential schools, and that was the underlying problem, parental rights were not respected, the rights of the family were not respected.”

Trost pointed out that education is under provincial jurisdiction. But “we have the responsibility at the federal level to protect people’s civil rights,” he said. “So you need to go and tell your federal Member of Parliament this issue matters to you too, you can do something to protect parental rights.”

Added Trost: “I, for one, will fight for this issue. I will keep it going and we will push forward. Your rights need to be protected.”

He told reporters later that while the sex-ed curriculum is “not nearly the same level of seriousness” as the residential schools, “the underlying principle is the same,” the National Post reported.

Scott Masson also compared the Liberals’ imposition of the sex-ed curriculum to the state’s former “overreach into the realm of the family” with residential schools, which sought to “liberate” the children from their parents.

“I’m a status native … I’m also a Christian,” said Masson, a teacher at a private Toronto-based Christian school. “They’re our children, they’re not the government’s children. We didn’t think we’d have to fight over this because it’s 2016, and this is Canada,” which is a signatory to the UN Declaration on the Rights of the Child that recognizes parents as the primary educators of their children.

Steve Tourloukis, a Hamilton dentist and father of two whose four-year-old parental rights case is currently waiting a judgment by the Ontario Superior Court, told the rally that the “homophobia” policy of the Hamilton-Wentworth District School Board “requires teachers to challenge and eliminate traditional beliefs from the minds of their students.”

He had heard stories of “an assembly where a lesbian speaker told the gymnasium full of kids that everything the Bible teaches about homosexuality is wrong,” and that in another school, “students were forced to participate in pretend gay weddings.”

“As an Orthodox Christian, my faith requires me to protect my kids against this kind of propaganda,” Tourloukis said.

Some parents have chosen to pull their kids out of the system in the face of such policies, which Tourloukis characterized as an “ethnic and religious cleansing” of the schools. “Instead of leaving the school system, I chose to fight the board in court.”

However, the Wynne government and the Elementary Teachers’ Federation of Ontario have joined forces with the school board to contest Tourloukis’ constitutional challenge.

He has asked the court to declare that he has the right to know what his kids will be taught and to pull them from classes he deems inappropriate.

Most significantly, he’s asked the court to declare that as a parent, “it is I, not some bureaucrat, who is the final authority over the education of my children.”

Lou Iacobelli, president of the Parental Rights in Education Defense Fund, urged people to donate to Tourloukis' case (here), and to “tell the Liberal government, and make it loud and clear, where the sex curriculum belongs: ‘Put it in the garbage, not in the minds of innocent children.’”

Full repeal of the curriculum necessary

The Wynne Liberals have spent $6.5 million on promoting the sex-ed curriculum, she added.

“We demand a full repeal of this curriculum. Why? Because it’s age inappropriate, it sexualizes children, and because it wasn’t developed with full consultation of us, Ontario parents,” Granic Allen said.

Colin Postma of Association for Reformed Political Action (ARPA) Niagara told the rally that the “problem is not that we don’t want our kids to know about sexuality.”

“The problem is that this curriculum is sexual erotica handed out to our kids by politicians. It focuses on experimentation at an age when children’s hormones lead the way, instead of their will and their reason.”

Queenie Yu also emphasized that “parents know their kids best, so they’re the ones who should decide when, what and how much to tell their kids about sex.”

A former PC Party staffer who worked as a fundraiser for the PC Ontario Fund, Yu ran as an Independent candidate in the Scarborough-Rouge River byelection solely on an anti-sex-ed platform.

Although PC Raymond Cho won the September 1 election, Brown has been dogged by continuing revelations about his involvement in the decision to circulate the letter promising to “scrap” the sex-ed curriculum.

Yu’s experience has made her determined to keep fighting the sex-ed curriculum, she told the crowd. “All of us have stuck to our principles of defending parents rights,” she said, adding: “Abraham Lincoln said the ballot is stronger than the bullet. I’m not going to stop … this fight until Wynne’s sex-ed curriculum is repealed. Thank you for inviting me into your army.”