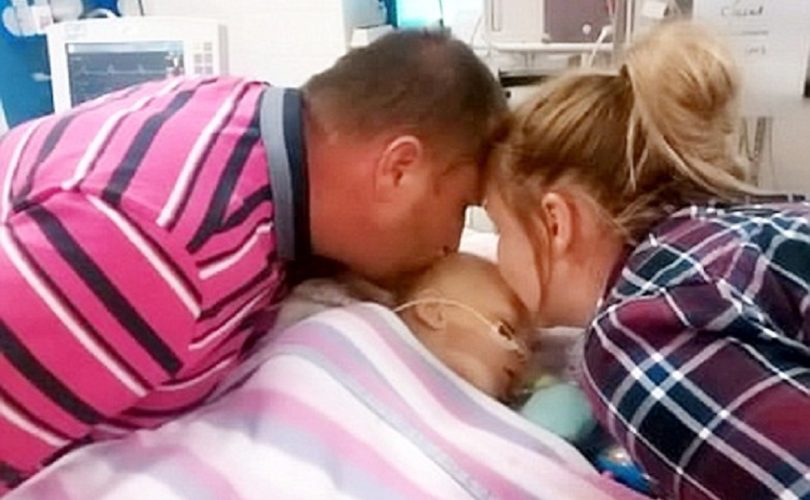 CLACTON-ON-SEA, United Kingdom, January 7, 2016 (LifeSiteNews) – Bella  Moore-Williams is being hailed as “a Christmas miracle” by the headline-hungry British press. There is no question that the two-year-old's survival last July is an answer to fervent prayer and has confounded medical expertise.

Now Bella is far enough along in recovery for her mother Francesca to tell The Daily Mail, “She made our family complete and it's great to see how well she is doing.” Pictures show Bella standing on her own with a wide grin on her face, and beaming just as much in her parents' arms. “When she says 'Mama' it just melts my heart.”

Diagnosed with mitochondrial disease in July after showing a steady decline in energy and motor ability, the second child of Francesca and Lee Moore-Williams of Clacton-on-Sea was first treated for asthma. But after the girl declined further while on a family holiday, doctors at a Colchester hospital told the parents their daughter had the degenerative genetic disease that would shortly lead to her death.

But mitochondrial disease is hard to identify, and an alternative diagnosis was proposed by staff – a long shot, but one with hope – which was that Bella had biotinidase deficiency. Only two cases a year happen in all of the United Kingdom, the family were told, but fortunately, one of the cases six years earlier was at Colchester and presented similar symptoms. The disease prevents cell growth.

The treatment was simple: injections of Biotin, or Vitamin H. After a month Bella was taken off her ventilator but had immediately to be reconnected. The treatment had not worked, making staff think that their original diagnosis was correct. “We were told three times that she's not likely to survive, so every day we sat at her bedside praying,” her mother recalls.

The couple agreed to take no heroic measures to sustain their daughter and set the date of July 21 with hospital staff to take her off life support. The extended family gathered to say goodbye, one by one. On the appointed day, the Moore-Williamses posed with son Bobby for one last picture at their daughter's bedside before giving staff the go-ahead to shut off Bella's ventilator.

Then came the answer to prayer. They thought they were watching her breathe her last breaths, and they wept. Instead, after 30 minutes, her oxygen levels were up to 100%, and she was doing it on her own. “It's just amazing,” said Mrs. Moore-Williams. “It's like we have won the lottery.”

The same hospital staff who had counseled them to prepare for Bella's death now fought for her life. After three days, her energy was back to normal. After three weeks, she was ready to go home and after another nine to go off her infection-fighting medications. Now she takes four tablets of Biotin daily and will continue to do so, says her mother, “for the rest of her life.”

“She's now learning to talk,” Mrs. Moore-Williams says, “and her hair is growing back and she's even walking. She's about eight months behind where she should be but doctors are confident she will pick up quite quickly. She's at nursery and to look at her you wouldn't think she's been through what she has.”

Premature newborn was pronounced dead: but then doctors gave him to his mother to hold