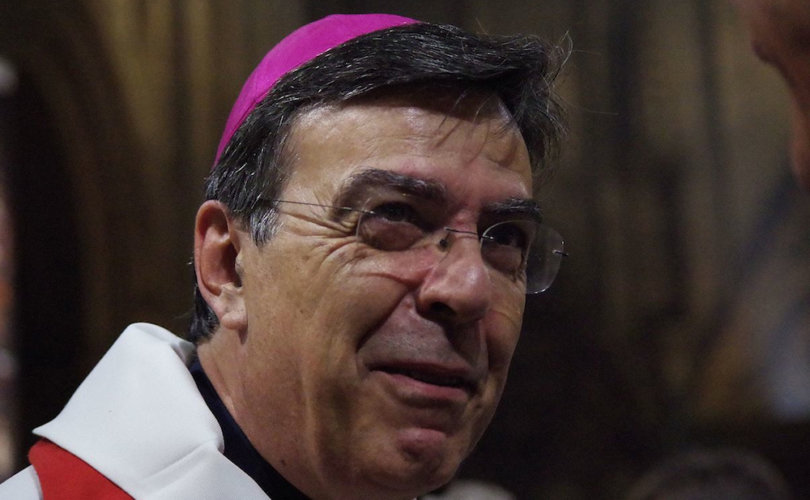 April 24, 2019 (LifeSiteNews) — Archbishop Michel Aupetit of Paris expressed regret publicly that the president of the French Republic, Emmanuel Macron, took the trouble to speak of the Catholics and their sadness when he spoke to the nation about the fire at Notre Dame Cathedral.

At the foot of the burning church, on Monday evening, Macron touched on the spiritual nature of the Gothic masterpiece, recalling that the tragedy was taking place at the beginning of Holy Week.

This welcome surprise was of short duration. On Tuesday, the president gave a short address on French television, promising to rebuild Notre Dame in five years — a rash promise, according to specialists — and speaking about its spiritual dimension but carefully avoiding any mention of Catholicism.

“It would have been nice if there had been a little word of compassion for the Catholic community,” Msgr. Aupetit wryly remarked on Sud Radio on Wednesday.

In fact, he expanded on the theme. “We are aching very badly because of the loss of our cathedral, this is Holy Week and we shall have to reorganize our prayers completely. It would’ve been nice if there had been a little word of compassion for the Catholic community, because after all, it’s the Catholics who make the Cathedral of Notre Dame live: it’s not a museum! If so many people come there, it’s because it’s a living space, enlivened by the Catholics. And the word Catholic is not a swear word! It comes from the Greek ‘universal.’ We are here to proclaim a universal fraternity based on love. It’s really no problem to say just a little word of compassion for Catholics who are suffering,” said Aupetit.

Was it deliberate? asked Sud Radio, underscoring the fact that Macron’s speech had been written beforehand.

“I don’t know, Msgr. Aupetit responded. “He’s the only one who can answer that question! I just want to talk about our pain, which adds to the ache of having lost the cathedral. Christians have felt a little hurt: just a little word of compassion, as would have been said for the Jews of the Muslims, I'm sure. We were touched by his presence on Monday evening, when … there were so many Christians all around, praying. They accompanied the firefighters, who did a remarkable job,” Mgr Aupetit added.

He agreed that the words “Christian,” “Christian roots,” and “Catholics” have in a way become taboo.

“Yes, probably, I think it’s because of a misunderstanding of the nature of secularity, which simply means the distinctness of [temporal] power. But that doesn’t prevent him from saying what we are, and what we are going through. This cathedral was built in the name of Christ. It is an addition of stones inhabited by a spirit. It is not a functional building. Some sculptures are in places you can't see: that is truly for something greater and more beautiful,” he said.

Msgr Aupetit also recalled the multiple aggressions against churches over the last months: “There are about three attacks per day. We shouldn’t generalize about anti-Christian hate but there is a lack of respect regarding sacred things.”

In de-christianized France, an increasing proportion of the native population no longer has any idea about Catholicism, its symbols, its rites, and its saints.

Interior minister Christophe Castaner made an official declaration on Wednesday morning in front of Notre Dame, saying: “Notre Dame is not a cathedral.” He added: “It is our common, it is what assembles us, it is our strength, it is our history.”

“That’s not untrue,” remarked editorialist Gabrielle Cluzel on Boulevard Voltaire. “Except that obviously, it’s also all of that BECAUSE it’s a cathedral.”

Bénédicte Le Chatelier, a journalist for the news TV station LCI, went a step farther. She commented live on the fire, saying: “Notre Dame is not a religious location, but the Catholics continue appropriating it to themselves.”

Such absurd statements would have lifted the tension somewhat if they didn’t demonstrate how far removed the powers that be are from the true significance of Notre Dame. Given that all the historic cathedrals and churches of France belong to the State as a consequence of the law of separation between Church and State in 1905, there may be stormy weather ahead when Macron tries to impose his plan to “rebuild” Notre Dame with elements of modern art.