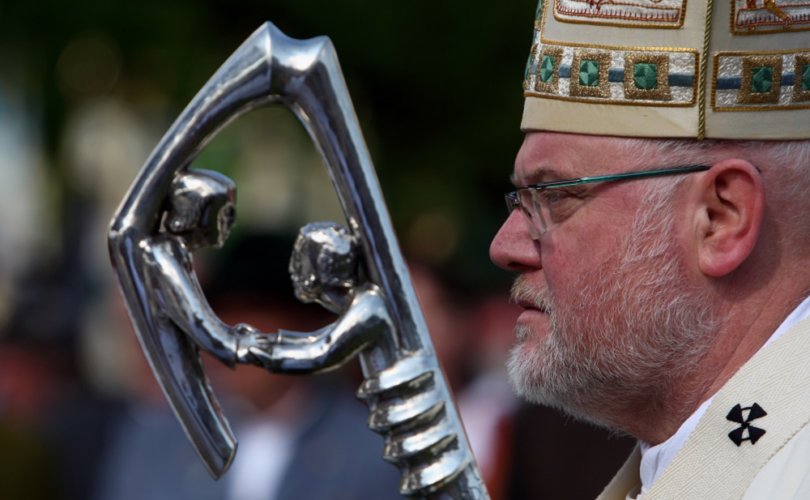 November 22, 2019 (LifeSiteNews) — German cardinal Reinhard Marx has been given a doctorate Honoris causa by the “Institut Catholique de Paris” (ICP, Catholic Institute of Paris), in the presence of the archbishop of Paris, Michel Aupetit. Germany’s chief cardinal is well known for his progressive agenda, and it is precisely his approach on societal and pastoral issues that was honored by the official Catholic university of the French capital.

Cardinal Marx, a leading figure under Pope Francis’s pontificate, is a member of Francis’s “C9” circle of close counselors and is also the coordinator of the Council for the Economy.

He has repeatedly spoken in favor of the priestly ordination of married men in the Latin Catholic Church, and he signaled last March that the Church in Germany is open to revisiting Catholic sexual teaching that prohibits contraception, cohabitation, and homosexual relationships. As head of the German Bishops’ Conference, he is one of the main initiators of the “synodal process” that will open on the first day of Advent with a roundtable together with Germany’s largest lay organization, ZdK (Central Committee of German Catholics), with Marx’s assurance that Pope Francis gave no stop sign regarding plans to discuss and question the Church’s teaching on priestly celibacy and other points that have been definitively fixed as indisputable doctrine.

The choice of Reinhard Marx to receive the honors of the ICP to mark the 130th anniversary of the “Theologicum,” the theology faculty of the Institut Catholique de Paris, focused on the cardinal’s commitment to “transform the Church.” Days before the event, the faculty’s rector, Msgr. Philippe Bordeyne (known for his support for Amoris Laetitia and its open approach to communion for the divorced and “remarried”) explained that the ICP usually avails itself of its more important anniversaries to honor “world-level ecclesial personalities.”

Former recipients of Honoris causa doctorates include the Orthodox patriarch of Constantinople, Bartholomew, and Justin Welby, the Anglican archbishop of Canterbury.

“We decided to choose a theologian who is active in the transformation of the Church and in pastoral life,” Bordeyne explained. Marx was chosen because he “confronts society’s real problems in his pastoral approach and also — along the lines of Pope Francis — because he found an original method to address them without watering down fundamental issues,” he said.

He added that Cardinal Marx works in Germany according to Pope Francis’s recent request that “theological formation be connected with contemporary human realities.”

During the ceremony that took place last Tuesday, Cardinal Marx gave a doctoral lecture in French on the theme “Liberty, Equality, Fraternity, a Catholic response.” “Liberté, égalité, fraternité” is the Masonic motto of the French Revolution.

Far from interpreting these words in the light of Catholic tradition, Marx presented them through the prism of the vocabulary of the current proponents of world ecology. According to La Croix, the unofficial daily of the French episcopate, he said that he used to consider the motto of the Revolution of 1789 the “paradigm of modern Western society” but that it now appears as a “new concern for the future.”

“Today’s growing unrest and insecurity are the social, economic, political, and ecological consequences of unlimited capitalism,” he said, adding that the social doctrine of the Church calls for a “mastering” of capitalism and a new conception of  “progress” that should become “more integral.” This is in line with the idea of limiting growth and freedoms in the interest of our over-exploited planet, as can be deduced from the cardinal’s phrase: the French revolutionary motto is “valid” if it implies “a responsible freedom, an equality of all in dignity within our common home.” The “common home” is the catchword used to promote rights for the Earth and to consider human beings an integral part of material creation.

True liberty from the Catholic perspective is the freedom to act according to God’s will. Equality means that all human beings are created in God’s image and likeness but rejects egalitarianism and recognizes that they can lose their dignity by gravely opposing God’s commandments. True fraternity is what comes from being children of God.

While calling for the foundation of freedom and fraternity in faith, Marx spoke of a “new era of Christianity to speak of God,” something he himself is openly working to usher in through the watering down of the Church’s traditional moral teachings. He has also participated in a public homage to his namesake, Karl Marx, in whose writings the cardinal claims to have found a “corrective to the capitalist system,” suggesting that the Communist Manifesto was truly concerned with the good of the proletariat. While attacking capitalism, he warned against establishing a direct link between Karl Marx and Marxist-Leninism, communist concentration camps, and so on, grudgingly conceding that there are merely “a few totalitarian thoughts” in the writings of the initiator of modern communism — and terror. These comments were made in May 2018 to mark the celebrations of the bicentenary of Karl Marx’s birth.

Cardinal Marx was a student at the Institut Catholique de Paris, where he spent a year during his seminary formation in 1975.

During the Honoris causa doctorate ceremony at the ICP on Tuesday, which was attended by large numbers of academics, diplomats, and politicians, the dean of the Theologicum, Fr. Jean-Louis Souletie, said Cardinal Marx deserves his distinction because he is “a man of the Church, a man of freedom and a European,” according to La Croix. “‘You are a convinced and convincing initiator within the Church,’ he said, adding that for Cardinal Marx, ‘synodality is a necessity for the march of the contemporary Church.’”

Archbishop Michel Aupetit of Paris, as chancellor of the ICP, presented Cardinal Marx with the insignia of his honorary doctorate, called the event a sign of “reconciliation” between France and Germany, “beyond the divisions of history.” More importantly, he presented it as a sign of “unity in faith.”

Reinhard Marx has given ample proof that he is willing to change that faith.