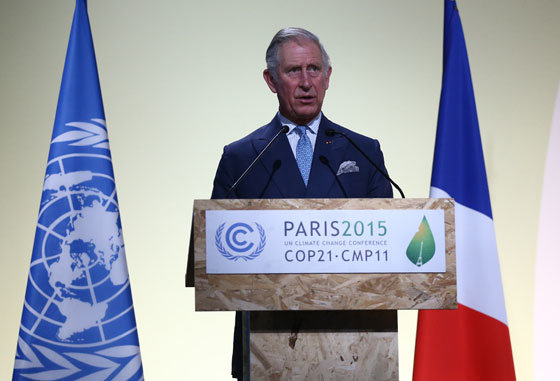 PARIS, December 1, 2015 (LifeSiteNews) — The COP21 – or 21st edition of the Conference of Parties on “climate change” – got off to a spectacular start on Monday with 150 heads of state joining to speak of the “urgency” of the fight against “anthropogenic” global warming. Even though many scientists disagree with the theory that man’s carbon emissions are causing the planet to heat up, and a good number believe that there has been at least a “pause” in global warming for over 18 years, an overwhelming majority of politicians at the helm of their respective countries are touting emergency measures to keep carbon emissions down. Underlying all this is the Malthusian idea that the Earth’s population is no longer “sustainable.” If man is to blame, that means there are too many human beings on the planet.

That was in fact one of the first points made on Monday, when the 150 heads of state took turns to make 6-minute speeches fraught with urgency and alarm. So many had accepted French President François Hollande’s invitation they had to be separated into two groups in parallel events. As a special guest, the Prince of Wales was one of the first to speak.

“On an increasingly crowded planet,” he said, “humanity faces many threats – but none is greater than climate change.” Prince Charles named several challenges linked to global warming: “our ability to feed ourselves; to remain healthy and safe from extreme weather; to manage the natural resources that support our economies, and to avert the humanitarian disaster of mass migration and increasing conflict.”

What with the Paris terrorist attacks on November 13, the rise of the Islamic State and the spectacle of thousands of migrants crossing the southern borders of Europe all summer, this was an obvious play on people’s feelings of fear and desire for security. The operative words are of course “an increasingly crowded planet.”

Now the participants at the COP21 are, in the main, not using the words “overpopulation,” “population control,” or “family planning,” if we can go by press releases at least. But the idea is very much under the surface. The choice of Prince Charles as one of the first keynote speakers at the very opening of the Paris conference makes the point: he has long been making it clear that there are too many human beings around and that it is high time traditional respect for human life adjusts itself to reality.

In 1992, he was already discreetly accusing the Vatican of being part of “certain delegations” who are “determined to prevent discussion of population growth.” In June 2010, during a lecture marking the 25th anniversary of the Oxford Centre for Islamic Studies of which he is a patron, Prince Charles said the population of Lagos in Nigeria has risen from 300,000 to 20 million in his lifetime: “I could have chosen Mumbai, Cairo or Mexico City; wherever you look, the world’s population is increasing fast. It goes up by the equivalent of the entire population of the United Kingdom every year. Which means that this poor planet of ours, which already struggles to sustain 6.8 billion people, will somehow have to support over 9 billion people within 50 years.”

Speaking of the “very difficult moral questions” raised in this context, he added that we should come to a view that balances “the traditional attitude to the sacred nature of life” with religious teachings that urge humans to “keep within the limits of Nature’s benevolence and bounty.”

This is in obvious defiance towards traditional condemnation of contraception and might even be construed as justifying abortion.

Three years later, in 2013, the Prince of Wales published an official endorsement of Paul and Anne Ehrlich’s (authors of The Population Bomb) latest report on overpopulation, which pleads for universal access to (chosen) contraception and “legal and safe” abortion, on his official website.

All this was left unsaid at the COP21 but it does enter the logic of the talks, as confirmed by international bodies such as the United Nations and its agencies that promote population control in exchange for development aid.

Bill Gates and his billionaire counterparts are aiming to invest millions in “clean” energy, together with widespread public investment, in order to make the field attractive to investors.

But “philanthropist” Bill Gates and his wife Melinda are also well known for their action in favor of population control and the distribution of contraceptives in poor countries. All the major companies involved in the initiatives are proponents of LGBT rights as are many sponsors of the COP21 in France.

At least one advisor to the Bill & Melinda Gates Foundation is officially taking part in the COP21 on the chapter of “green agriculture.”

Pope Francis himself has reiterated his support for the COP21, hoping together with François Hollande that the talks will lead to a “binding” agreement where rich countries will help poor ones, both technically and financially, to go ahead with the “ecological revolution.” On Monday, the pope called on the international community to realize that global warming is driving the world “to the brink of suicide.”

Saying he was “unsure” of the COP21’s outcome, he added: “All I can say is that it’s now or never.” He was speaking to the press in the airplane that was bringing him back to Rome from his African journey.

As the major anti-global warming demonstration that was to have taken place on Sunday in Paris was canceled because of the November terrorist attacks, the French authorities suggested would-be demonstrators send a pair of shoes to the “Place de la République” to represent them there. Pope Francis agreed to “sign” one of the pairs with the inscription Laudato si’. They were placed there together with two pairs of shoes bearing the cards of Cardinal Peter Turkson and Cardinal Claudio Hummes who personally presented a petition by 800,000 Catholics from 130 countries in support of the COP21 at an interreligious event in Saint-Denis, north of Paris, last Saturday.

Cardinal Turkson, who will be representing the Holy See during the second phase of the climate conference, has taken advantage of his position as president of the Pontifical Council for Peace and Justice to encourage 5,100 bishops and 413,000 priests to commit themselves in favor of the Paris summit, asking them to check out demonstrations and other events in their dioceses in favor of fighting climate change.