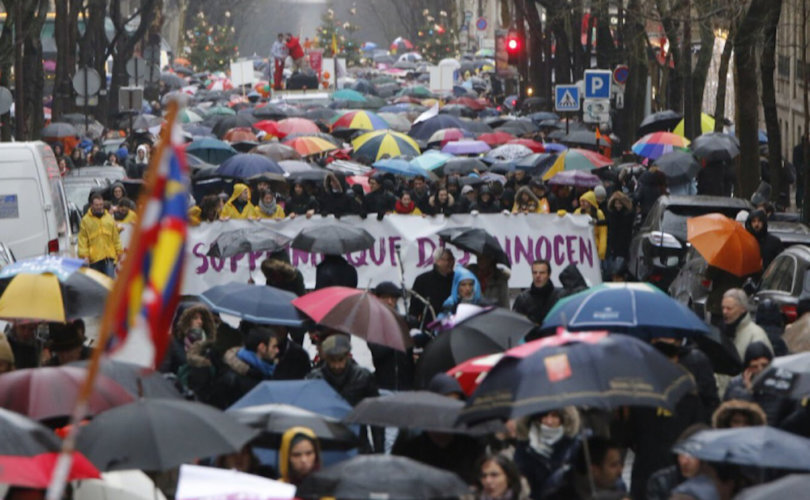 January 24, 2018 (LifeSiteNews) – “Over a thousand demonstrators took part in an anti-abortion March in Paris … ” Technically, headlines in the French mainstream media were not incorrect. There were indeed more than 1,000 “Marchers for Life” in the streets of Paris last Sunday. But there were many, many more – so many that the reports sounded like fake news.

Police counts spoke of 8,000 participants, but the true figure was at least twice or three times larger. The March was a considerable success given the miserable wet and cold weather that transformed the crowd into a sea of dripping umbrellas, drenched waterproofs and soggy shoes. This year’s slogan, “From the shadows to the light,” was illustrated by the youth and enthusiasm of the crowd in the face of somber skies.

The March owes at least part of its success to the urgency of the current situation in France, where on Monday the government launched a public consultation in view of  revising France’s bioethics laws. Among a far-ranging series of themes, Emmanuel Macron’s administration is working to make assisted procreation available to homosexual couples. Artificial fertilization for lesbians will be under discussion and also extended use of embryos for research, assisted suicide, euthanasia and organ donorship. Surrogate motherhood, on the other hand, has been formally rejected by the government – but will still be part of the debate. Many fear an unprecedented commodification of the human body and the human embryo.

All of these themes were present in the March for Life’s demands and statements. Even the issue of contraception was not forgotten when Jean-Marie Le Mené of the Fondation Jérôme-Lejeune summed up at the end of the March the anti-scientific trend of anti-life laws and actions, reminding the crowd that “flooding women’s bodies with hormone disruptors during 30 years through their fertile life is not scientific.”

The March in itself was, as it has been since its first edition some 15 years ago, a good-natured and peaceful event. It was briefly disturbed by half a dozen “Femen” who painted red tank tops on their bare torsos and went around asking for sperm donations in the name of “Christian charity for lesbians.” The March’s security volunteers tried to cover them with survival blankets before they were surrounded by the police force.

A more serious incident took place on Sunday morning in the Breton town of Rennes, 400 kilometers from Paris, where a chartered bus coming from the center of Brittany was prevented from continuing its journey after stopping to pick up families – including elderly people age 75 but also children as young as nine headed for the Paris March for Life.

The bus was blocked as it came into Rennes, a large provincial town where the “Antifas” are particularly active. A group of masked activists, including feminists, anti right-wing militants and communists held up the bus for three hours, surrounding it with metal barriers, unceasingly yelling insults and obscenities, covering it with stickers and throwing smoke bombs, one of which landed in the bus, thankfully only burning a seat and clothes because one of the travelers had the presence of mind to throw it back out.

Another traveler collapsed, and the children on board were terrified. Some of the male passengers were able to shove the assailants toward the barriers that they themselves had set up. Four police officers tried to open negotiations with the “pro-choice” activists while explaining to the passengers and the bus that they were waiting for reinforcements in order to clear the way.

Those did not come until three hours later, but it was not too late to join. The bus arrived in Paris around 4 p.m., 1 ½ hours after the front lines of the March for Life had started moving from the Porte Dauphine at the edge of Paris toward the place du Trocadéro, across the Seine from the Eiffel Tower.

While people of all ages took part, the large numbers of youth struck the minority of mainstream media actually present to cover the event. The 24-hour news channel LCI published a somewhat puzzled report, trying to answer the question: “How can you be 20 today and demonstrating against the right to abortion?”

The amount of young people and children standing up for life, despite having been born at least 20 years after the legalization of “voluntary interruption of pregnancy” (IVG) as it is euphemistically called, had the journalists stumped. How can you be 20 and march behind banners saying “abortion is a burden, not a choice” or “IVG, enough!”  they wondered.

One article about the March was discreetly hostile, but it did quote Marie, 19, who said that in the event  she might one day have an unwanted pregnancy, “there are always families who are ready to adopt.” “That’s always better than to kill someone,” she added.

Compared with recent years, the Paris March for Life has done an overhaul, giving prominence to the younger generation. Banners, slogans and publicity were under the guidance of a talented communicator, Emile Duport. The young man is quite sure that legal abortion will collapse one day because it is wrong, just like the Soviet Union.

Duport presents himself as a “survivor” of abortion and has created a number of websites that do not correspond to the traditional image of the pro-life movement. He also challenges feminists and “pro-choicers” on their own terms, using their language and imagery.

But the message is clear: It can be summarized in the drawing of an unborn child with the words: “My body, not your choice.” “We're not afraid to change the law,” he made the crowd sing at the end of the March.

So, despite the rain, it was a festive affair, with music blaring from 20 or so trucks that punctuated the parade and the young people jumping and dancing in their wake on songs by Johnny Halliday or Dolores O’Riordan.

Out of tune with the tragedy of abortion, which kills about 220,000 unborn children in France every year, “600 a day”? Certainly.

The organizers wanted to focus on the beauty of life that is good of itself, sending a positive message about welcoming the “most vulnerable in our society,” as the bishop of Bayonne, Marc Aillet, put it in his opening remarks during the speeches that preceded the March.

Is this the correct approach? Some would not agree, but the event did attract unprecedented support from large organizations that up to recent years were less inclined officially to lend their names to the March for life. The Foundation Jérôme-Lejeune is now a major part of the organization, as is “Alliance Vita,” which is active in helping women with unwanted pregnancies and also in the fight against euthanasia. The Catholic Families Association was also present.

Only one other Bishop took part this year, Dominique Lebrun of Rouen. A dozen bishops voiced their support, including Cardinal Philippe Barbarin of Lyon and Michel Aupetit, before he was named archbishop of Paris several weeks ago, and Cardinal Robert Sarah from Rome. A number of diocesan priests, many of them young, and many representatives of the traditional Catholic institutes were present at the March.

Contrary to what happens in the U.S., slogans, banners and cheers were strictly regulated by the organizers. A group of about 500 demonstrators joined Dr. Xavier Dor, the heroic, almost blind doctor who has been repeatedly sent to court for organizing peaceful prayers near abortion facilities at the end of the March, walking in silence or praying the rosary.

Since legal abortion was approved in France at the end of 1974, many legal barriers have fallen and abortion is now considered to be a “human right.” It is 100 percent funded by public money.

Why do people go on demonstrating for life when nothing seems to be helping? One woman taking part told LifeSiteNews: “We vote, and nothing happens. The press is silent. Our feet is all we have left and we need to make ourselves heard, so here we are.”