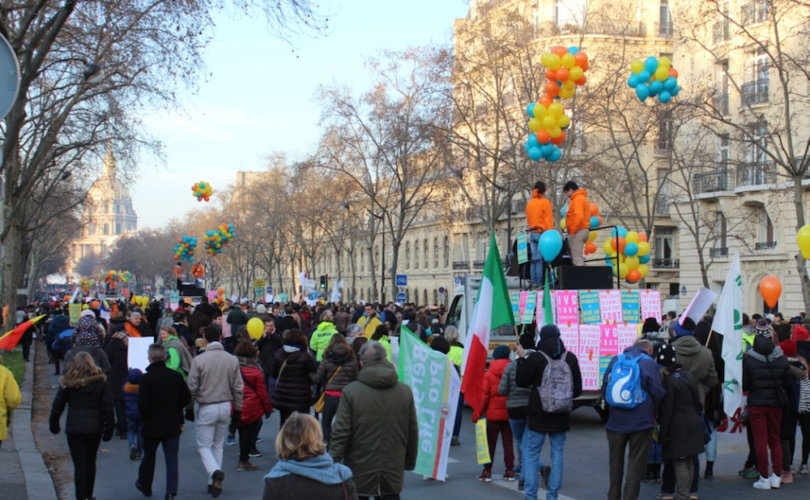 PARIS, France, January 24, 2017 (LifeSiteNews) — More than 50,000 pro-lifers from across France gathered for the annual Paris March for Life on Sunday.

The annual Paris March for Life is the largest pro-life demonstration in Europe.

The demonstration comes just months before France elects a new president, with right-wing Francois Fillon, a Catholic who uses the Carter-esque “I am personally opposed but politically support abortion” line.

Pope Francis expressed his support before the Parisian march, calling for a “civilization of love and a culture of life.”

A major focus of the demonstration was on France's proposed anti-life amendment that criminalizes pro-life speech. The amendment would make it illegal to “interfere” in any way with the abortion industry — including simply seeking to dissuade a woman from aborting her baby.

Originally written to ensure physical access to abortion clinics, a 1993 law was broadened in 2001 to include criminalizing “moral and psychological pressure” against abortion. In 2014, the same law was again amended to make it illegal to “obstruct access to information” on abortion.

Now another amendment has pro-life websites in its sights.

The government says certain pro-life websites “deliberately deceive” and “manipulate” women by giving the appearance of neutrality while actually trying to encourage them to give life. This “false information” would be punishable by a $33,600 fine and up to two years in prison.

“Websites that have all official appearances to actually give biased information designed to deter, guilt, traumatize is not acceptable,” Laurence Rossignol, the French Minister of Families, Children, and Women's Rights, told the French news website Rue89.

The French National Assembly passed the bill in December and Parliament is scheduled to vote it into law this week.

Rossignol calls pro-life sites such as www.igv.net “misleading” because they inform women of the psychological risks and potential trauma of abortion. Therefore, she says she wants to “limit the dissimulation of an opinion.”

The French government's website on abortion does not give complete information or even present alternatives positively. Instead, it goes to great lengths to deny the scientific research that demonstrates the reality of Post-Abortion Syndrome.

Christian Democratic Party member Jean-Frederic Poisson tweeted that it is hypocritical for the government to ban pro-life sites simply for offering alternatives to abortion while allowing “jihadist” websites that seek to persuade people into terrorism.

Others have noted that French law itself calls for women to be informed of the available alternatives to abortion.

Besides criminalizing pro-life speech online, the amendment would remove the formal requirement of a woman declaring she is in “distress” over her pregnancy. The effect of removing what has become an ignored formality would be to elevate abortion to a basic human right for women.

“Rewording of the law would have deep symbolical implications as abortion would no longer be considered as an exception but as a positive good women can demand,” LifeSiteNews Paris correspondent Jeanne Smits explained.

Additionally, if the measure passes Parliament, any perceived “hindering” of abortion, such as suggesting any health dangers or negative effects from the procedure, could be punished.

“The French administration makes it every day more difficult for pro-life associations to express their ideas and to promote pro-life choices,” European pro-life attorney Gregor Puppinck explained. “The mere display on a website of, for instance, information about the risks of having an abortion, or an attempt to convince women that there are other solutions than abortion would be considered, with the new law, as a criminal offense punishable by up to two years of imprisonment and €30,000 fine.”

Early abortions are tax-funded in France. Every year, 220,000 abortions are officially reported. Statistics indicate that one in every three women during their lifetime has had an abortion.