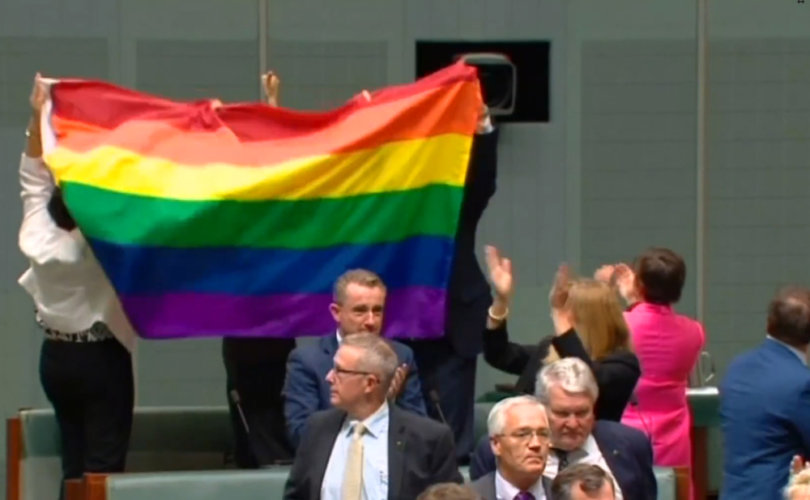 Cheers erupted in the chamber and outside when the vote was announced. A majority of Australians considered the sanctioning of same-sex “marriage” a positive move.

“This is Australia: fair, diverse, loving and filled with respect,” Prime Minister Malcolm Turnbull said. “For every one of us this is a great day.”

The new law deletes “the union of a man and a woman” from the definition of marriage and inserts “the union of two people” in its place. Australia already had “equality” laws giving special status to homosexuals in the workplace, and for government benefits and tax laws.

Significantly, none of the promised amendments protecting freedom of conscience, religious liberty, and parental rights were allowed. All opposition concerns were defeated, including the right of parents to opt out of homosexual or transgender indoctrination in schools.

Specifically, the new law does not give allowances for Christian business owners to choose who they will employ based on their religious values, nor does it protect them from being forced to participate in homosexual weddings — despite their sincerely-held beliefs in one-man, one-woman marriage.

Also defeated were conscience and faith amendments to allow Christians and others disagreeing with gay “marriage” to be granted free speech.

The legislation now goes to the Governor-General Peter Cosgrove for “Royal Assent,” a formality expected any day.

Activists predicted the Australian passage will influence other countries to do the same. Influential Brooklyn gay activist attorney Evan Wolfson said the vote “will reverberate in the lives of people across Australia and the world.”

Other homosexuals admitted that their goal is much more than just the recognition of marriage. “People need to realize that marriage is a certain thing for a certain part of the community, but the real social mission behind all of this is equality,” actor/director Tristan Meecham said, without revealing the breadth or scope of his meaning of “equality.” He simply added, “There is a lot of work that still needs to be done.”

Christians and other traditional marriage advocates have expressed concerns that the gay agenda talks about fairness, anti-discrimination laws, and societal tolerance, but also fights for special rights, government endorsement, and societal approval.

The path to legalization came via a referendum sent through the mail to all registered voters. Nearly 62 percent of returned forms favored gay “marriage.”

Although the postal referendum was an end-around after 22 legislative attempts to legalize homosexual “marriage” failed, former Prime Minister Tony Abbott said the popular vote was the best avenue for a country to take. “Some countries have introduced it via the courts, some via Parliament, and others — Ireland and now Australia — by vote of the people,” Abbott said. “And that is the best way because it resolves this matter beyond doubt or quibble.”

Homosexuals “wed” elsewhere will have their “marriages” instantly recognized upon the Governor-General’s assent. Because Australian law requires a one-month notice of intention to marry, indigenous gays could have wedding ceremonies in the country as early as January.