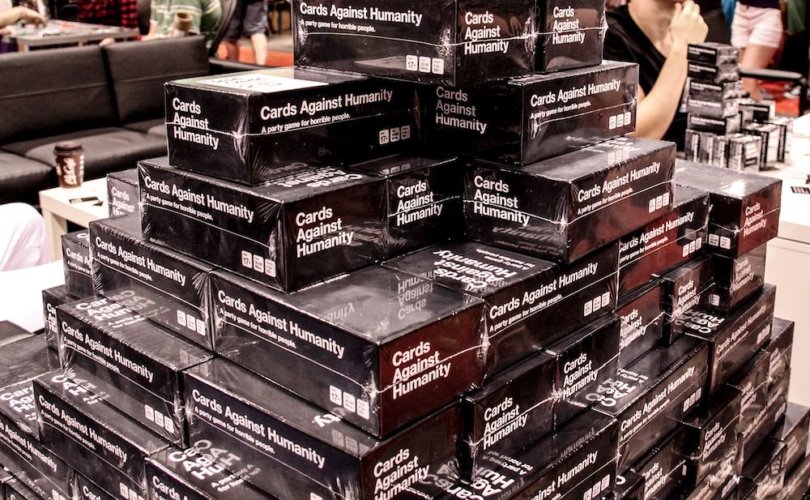 (LifeSiteNews) – The creators of self-described “party game for horrible people” Cards Against Humanity made their anti-humanity stance more literal and less ironic than ever before recently by launching an attack against states that have become functionally pro-life in the wake of Roe v. Wade’s overturn, and announcing that profits from customers in those states will help to continue killing preborn children.

“Today, we are releasing some new packs,” CAH announced on its “Your State Sucks” page. “But while the packs were being printed, the Supreme Court overturned Roe v. Wade, and your state immediately turned itself into a dystopian forced-birth hellscape. So we’re donating 100% of profits from orders to your nightmare-state to the National Network of Abortion Funds, plus $100,000 right now, to help the people most f***ed over by the Republicans in your state government. We don’t need your money.”

NNAF exists for the purpose of facilitating abortions via monetary aid, from “work[ing] with clinics to help pay for your abortion” directly to paying for “transportation, childcare, translation, doula services, and somewhere to stay if you have to travel to get your abortion.”

When placing an order on CAH’s website, entering a shipping address in a state where abortion is now illegal brings up a message declaring that the customer lives in a “theocratic hellscape where human beings are forced to carry unwanted pregnancies by threat of imprisonment” (which is false; abortion bans penalize abortionists, not mothers) and announcing that all profits from the order will go to NNAF. Customers can agree, offer to donate an additional $5, or click the message, “What? I’m pro-life! I didn’t agree to this.”

Clicking the last option brings up another message, predicated on the popular misrepresentation of abortion as a purely personal matter in which the child being killed might as well not exist, and only the woman is affected.

“So you don’t want us using your money to pay for abortions?” the website asks. “You know, sometimes people have values imposed upon them by bigger, more powerful entities, and they are forced to do things they don’t want to do, like carry an unwanted pregnancy. For example, we just added an extra $5 donation to the National Network of Abortion Funds to your cart.”

The company also released a poll of pro-life states conducted with data company Dynata, purporting to reveal extreme beliefs and outlandish ignorance supposedly reflecting on pro-life Americans, such as not knowing the details of their new laws, wanting to imprison women or force them to risk death, being unable to identify various reproductive organs, and thinking women can “naturally” prevent pregnancy from rape.

While the caliber of Dynata’s methodology is not immediately clear, and the full findings are not presented in a way that lends itself to fast review of the exact question wording or detailed breakdowns of the responses, a cursory look at the raw data reveals some odd inconsistencies that raise questions about how closely the pollsters or CAH scrutinized it before release.

For instance, the very first respondent out of more than 2,900 describes himself as “liberal,” “pro-choice,” and a Democrat, yet answers that doctors should be fined and women imprisoned for illegal abortions. This person resides in Georgia, whose heartbeat law imprisons abortionists but does not punish women and has exceptions for rape in the first 20 weeks, yet he answers both that rape exceptions should not be allowed and that Georgia’s law “should be more permissive.”

In fact, public ignorance on the issue tends to benefit abortion activists, such as popular misconceptions about what Roe v. Wade actually did, persistent misinformation about what pro-life laws do or do not do, and general lack of awareness of information fundamental to the issue, such as when life begins, fetal development, fetal pain, how abortion procedures work, what abortifacient drugs actually do, and the prognosis of children with conditions such as Down syndrome.

Cards Against Humanity, a game premised on completing intentionally outrageous or offensive phrases in the name of humor, has a history of left-wing advocacy, including LGBT pride, climate activism, support for Hillary Clinton, support for pro-Democrat lobbying group Emily’s List, and opposition to the partially-constructed border wall between the United States and Mexico.