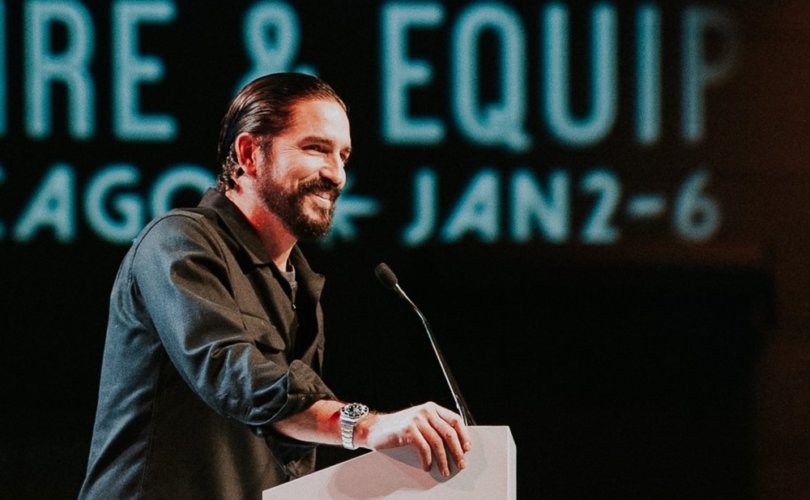 CHICAGO, Illinois, January 4, 2018 (LifeSiteNews) – Catholics must be ready to risk their lives and reputations to defeat evil in the world, Passion of the Christ star Jim Caviezel told a gathering of Catholic college students this week.

Only through the faith and Christ’s wisdom can we be saved, Caviezel said, but it will also take people who are prepared to fight, sacrifice and suffer.

Citing St. Maximilian Kolbe, Caviezel said that indifference was the greatest sin of the 20th century, and still is in the 21st century.

The Passion of the Christ star and veteran of numerous other film and television productions made a surprise appearance Wednesday evening at the SLS18 (Student Leadership Summit 2018) conference sponsored by The Fellowship of Catholic University Students (FOCUS).

The event is running January 2-6 in Chicago, and geared to form Catholic college students to be missionaries in their lives, in particular on campus.

Caviezel’s message, captured on video and posted to Facebook by Father Brian Buettner, Vocations Director at Archdiocese of Oklahoma City, was enthusiastically received.

He prefaced his talk with his forthcoming movie Paul, Apostle of Christ, sharing how the filmmaking experience showed him that to be great in the eyes of God, we must first be small and accept Him entirely, allowing Him to guide us.

Caviezel also spoke of the significance of suffering, and decried the prevalent misunderstanding that Christianity is merely about “happy talk.” See the talk which begins at 1:50 in the video below .

It was not by chance that he was called to acting, he said, sharing how earlier roles lead to his being tapped to play Christ in Mel Gibson’s epic film of Christ’s Passion and Resurrection.

Caviezel told those at the FOCUS conference that likewise, their lives were not just comprised of coincidence.

“Some of you may be miserable right now, confused, uncertain of the future, hurting,” he said. “This is not the time to back off or to give in.”

He recounted how completing the role of Christ entailed great trial and suffering for him, including physical aspects of scourging, being crucified, struck by lightning, and open-heart surgery after five-plus months of hypothermia.

Caviezel’s shoulder was also separated while carrying the cross during filming, which he continued to withstand to finish the film. This was like a penance, he said.

“When I was up there on the cross I learned that in His suffering was our redemption,” Caviezel shared. “Remember the servant is no greater than the master.”

“Each of us must carry our own cross,” he continued. “There is a price for our faith, for our freedoms.”

He told the crowd that the suffering made his performance, “just as it makes our lives.”

Caviezel went on to stress that the resurrection, and indeed our salvation, comes at a price.

“Some of us now, you know them, embrace a fake Christianity, where its all happy talk – I call it ‘happy Jesus’ – and glory.”

“Guys, there was a lot of pain and suffering … before the resurrection,” Caviezel stated. “Your path will be no different. So embrace your cross, and race toward your goal.”

Caviezel has spoken openly about his faith and pro-life convictions in the past, and shared how his experience making The Passion of the Christ has affected him spiritually. He has also advocated for adoption, and been open about his and wife Kerri’s experience as adoptive parents.

He challenged those at the Catholic gathering to publicly live their faith.

“The world needs proud warriors, animated by their faith,” he added. “Warriors like St. Paul, and St. Luke, who risked their names, their reputations, to take their faith, their love for Jesus into the world.”

We often fail to respond, dismissing God’s call, Caviezel told the Catholic crowd. And it is now time for this generation to accept that call, ourselves entirely to Him, he said, returning to prayer and fasting, scripture and the sacraments.

“But you first must make the commitment to start praying,” Caviezel said, “to fast, to meditate on the Holy Scriptures and to take the holy sacraments seriously.”

We are a culture now in decline, he added, and our whole world is entrenched in sin, freedom has been replaced with license.

“For in our country now we are only too happy to go with the flow,” Caviezel stated. “We have a shrine to freedom now where all choices are equal no matter what the consequences are. Do you honestly think this is true freedom?”

Citing Pope Saint John Paul the Great, Caviezel explained how society cannot exclude moral truth and reasoning. Every generation of Americans needs to know that freedom exists not to do what you like, he said, but having the right to do what you ought.

In closing Caviezel recounted the scene in Gibson’s Braveheart film with William Wallace challenging his men as they faced certain defeat, telling them their enemies may take their lives, but they'll never take their freedom.

Caviezel quoted the line from the scene that, “Every man dies, not every man truly lives.”

“You, you, you,” he exclaimed – pointing to individuals in the audience, “we all must fight for that authentic freedom and live, my friends.”