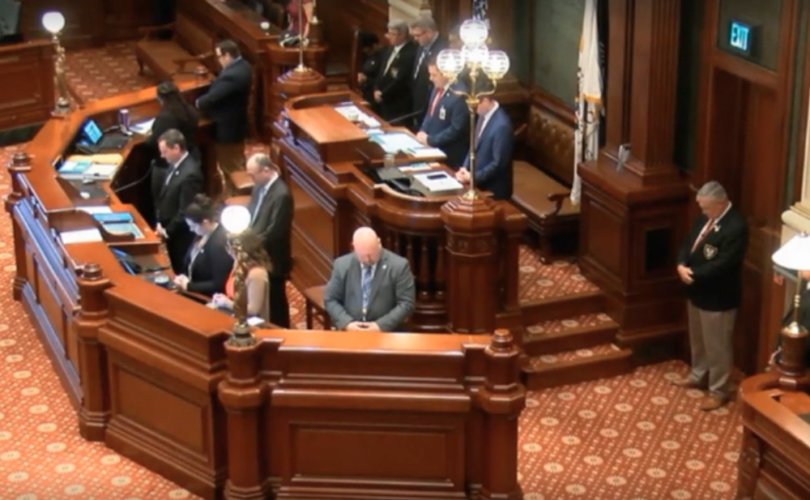 SPRINGFIELD, June 6, 2019 (LifeSiteNews) – The pastor who led the Illinois House of Representatives in prayer last Friday admonished the chamber for advancing virtually unlimited abortion in the state, calling on God to judge lawmakers’ abandonment of preborn babies.

Illinois lawmakers are currently considering the so-called Reproductive Health Act (RHA), which like similar bills in other states would codify a “fundamental right” to abortion, establish “that a fertilized egg, embryo, or fetus does not have independent rights under the law,” and repeal numerous restrictions and regulations on abortion including protections for infants born after failed abortions. It passed the state House last week, and awaits action by the Democrat-controlled state Senate.

The legislation “allows abortion throughout pregnancy, up to the moment of birth, for any reason. It allows abortions by a non-doctor in a facility that's not inspected and doesn't have to report injuries,” Susan B. Anthony List National Campaign Chair Jill Stanek said. Stanek is an Illinois native and former nurse who witnessed babies being born alive and left to die in Chicago. “It strips away conscience protections for pro-life health care workers and forces all health insurance policies to cover abortions, including religious organizations.”

On Friday, Pastor Corey Musgrave of Fairfield’s New Beginnings Church devoted his opening prayer to the sanctity of life, Illinois Review reports. Musgrave had been invited to lead the prayer by Republican state Rep. Darren Bailey.

“God, we thank you for the ability to choose our own direction, even though those choices have consequences,” Musgrave said. “All throughout Your word, it is clear You have given us a choice […] so God, I confess here today that I have not always made the right choice, and I thank you for being a merciful God that forgives and restores when we turn back to You.”

“This state has decided to go its own way apart from you,” he continued. “Lord, You have told us those things which You hate, and among them are hands that shed innocent blood.”

“So, God, we have made our appeals to the leaders of Illinois this week on behalf of those innocent babies who do not yet have a voice,” he declared. “We have been a voice for those who cannot speak for themselves as You have commanded us. Those appeals were denied, but we have one final appeal left and that is to the courts of Heaven.”

Musgrave asked God to “rise up…and judge Illinois for the sanctioned destruction of the innocent unborn. For when Your judgements are in this state, the inhabitants of Illinois learn righteousness. In this House I pray for justice to roll down like water and righteousness like a mighty river. In Your judgement I pray that You would remember mercy for we know that You, oh God, do not want anyone to be destroyed.”

Several female Democrats in the chamber turned their backs to Musgrave during the prayer, Tristate Homepage reports. The pastor said later that those who took offense misunderstood his message.

“I don't have hatred for anyone,” he added. “I love the mother that had to make that choice and is dealing with it or the legislators that put this in.”

Democrat Gov. J.B. Pritzker, who vowed in January to make Illinois “the most progressive state in the nation when it comes to guaranteeing women’s reproductive rights,” has said he intends to sign the RHA into law.