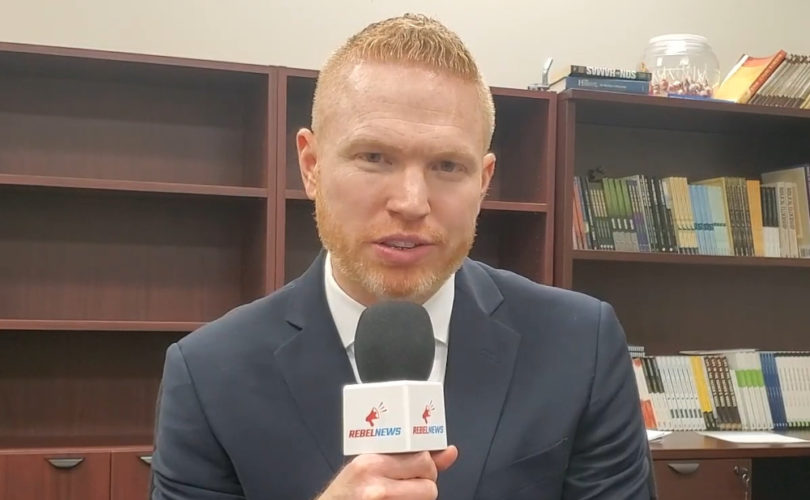 EDMONTON, Alberta, April 6, 2021 (LifeSiteNews) — In his first interview after being released from jail, Canadian Pastor James Coates described in detail his time in prison: from ministering the Gospel to his fellow inmates giving him a sign of support as he was released. Coates had been jailed for several weeks following a worship service held in defiance of lockdowns in Alberta.

“And just to kind of show the affection that we [Coates and his fellow inmates] had for each other, in the moment that I was leaving, I turned around. I was at the exit/entrance to the whole pod, I turned around and I lifted up my hand to wave, and the doors of the pod began to shake as the men in their cells just banged on their doors as a sign of support, of love, affection,” said Coates in his first interview since being released.

The prison chaplain, who was with Coates at the time, “emailed me since then and just shared with me that he’ll never forget that moment. And it was precious to me as well. And so that just gives you a little bit of a feel of the picture of the way that they thought toward me and treated me.”

In his Rebel News interview, Coates described the challenges he faced while being in quarantine for two weeks when he first arrived in jail, which included getting used to eating the food, and getting used to jail “culture.”

Coates said that once out of quarantine, he was placed with a cellmate, with whom he got along well, he said. “We … had lots of good discussions and conversations, and he’s called me since I’ve been out,” said Coates.

Coates said the “highlight” of his day was talking to his wife on the phone, and that overall, the “guys” treated him fairly well.

“I'd have chaplains visit me from time to time. I could play a little bit of basketball on the court outside, which is basically just a cement cube with no roof and, and just interact with the guys. They were pretty good to me. They treated me pretty well.”

I would “share the Gospel with them” in Bible study

Once Coates was allowed into the General Public, or G.P., as it is known in prison terms, he described how he had a lot of inmates come to him to “share difficulties in their life with me.”

Coates described how there was a “gentleman next door” to him who wanted him to do a Bible study.

“So, I went down to the floor. I was on tier three, and so we went to the floor where there’s tables, and sat down. He and I, within about sixty seconds, three or four of the guys sat down with us. And there we are in the Gospel of John having a Bible study,” said Coates.

The pastor said he would not have done anything different in terms of the events that led up to his imprisonment, and that he did what he did to be “obedient to Christ.”

“I’ve honored my word and my integrity and my conscience, and, more importantly, my Lord and Savior Jesus Christ, the entire time.”