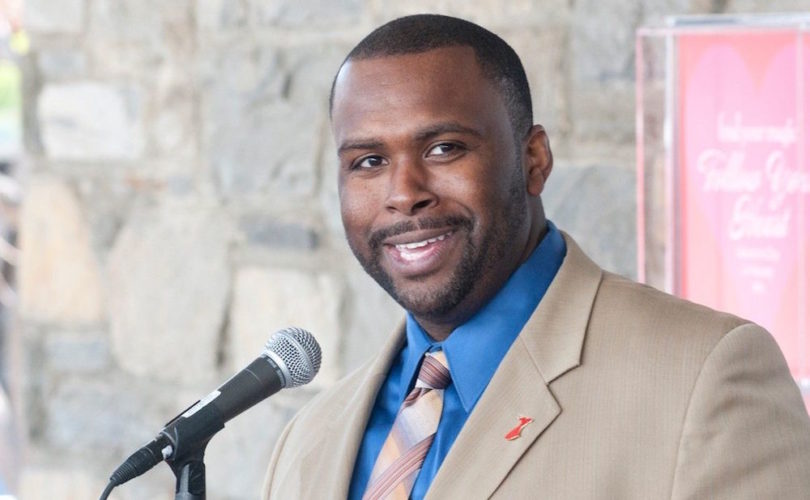 ATLANTA, Georgia, October 26, 2016 (LifeSiteNews) — The government is demanding to scrutinize a pastor's sermons, private notes, and his Bible.

The State of Georgia is threatening Dr. Eric Walsh in their quest to monitor his speech.  Dr. Walsh was Georgia District Health Director until he was fired in 2014.

“What is happening to Dr. Walsh should cause grave concern to every religious leader in Georgia,” First Liberty Senior Counsel Jeremy Dys told LifeSiteNews.  “Whether you are a pastor, priest, rabbi, or imam, you should be aware, if the government isn’t hesitating to go after Dr. Walsh, what’s to stop them from coming after you?” Dys warned.

“I hope the people of Georgia will remind Governor Deal that this is just one of many very important religious liberty cases that are happening in his state,” Dys said.  “He should do what it takes to protect people of faith in Georgia, starting by making things right with Dr. Walsh.”

At a press conference carried live on Facebook this afternoon, Walsh reaffirmed that he refuses to hand over his private notes, sermons, and his Bible to the state.  Present with Walsh in support were “Houston Five” pastor Dave Welch, leaders of the Family Research Council, Concerned Women for America, Georgia Baptist Mission Board, Faith and Freedom Coalition, and other state and national fighters for religious freedom.

Concerned Women for America (CWA) president Penny Nance called the chilling government action “Gestapo-like” tactics. “Can there be a clearer violation of our First Amendment right to religious freedom than for the state to monitor, examine, and retaliate against a person because of the sermons they share?”

“The state of Georgia's blatant attack on religious freedom, as they discriminate against another pastor, Dr. Eric Walsh, is indeed a threat to every American, whatever our religious beliefs,” Nance said.

Exhortations to courage are spreading from Christian leaders throughout the blogosphere, and a common theme is that time is of the essence to save our culture.  CWA of Georgia director Tanya Ditty wrote, “The time to speak up is now. The state's actions in this case do not happen in a vacuum; they are, unfortunately, part of a troubling pattern that is very dangerous.”

“Now is the time for people of faith to stand together for religious freedom,” Dys concluded.

CWA is joined by the Family Research Council (FRC) in demanding the State of Georgia stop this “anti-religious bigotry.”  FRC started an online petition to increase awareness and garner popular support for Walsh, calling on Governor Deal to “correct this egregious overreach of the state into church affairs.”

FRC president Tony Perkins, a pastor himself, called Georgia's action “an alarming display of government intrusion into the sanctity of the church, pastor's study, and pulpit.”

“This is something that I would have expected to see in a communist country, not America,” Perkins said in a press release.  “Government scrutiny of speech in the pulpit is unconstitutional, and unconscionable.”

Travis Weber, Director of FRC's Center for Religious Liberty, pointed out that this is not the first time in recent years that an agency of the government has sought to harass and unconstitutionally “investigate” ministers of the Gospel.

“We've recently seen the former Mayor of Houston issue subpoenas against pastors in Houston, Texas, seeking their sermons,” he said.  “This action against Dr. Walsh is another unjust assault on people of faith, including the pulpit itself.”

“This cannot go unchallenged,” Weber concluded.  “What they are doing is the opposite of religious freedom and everything that it means to be an American.”