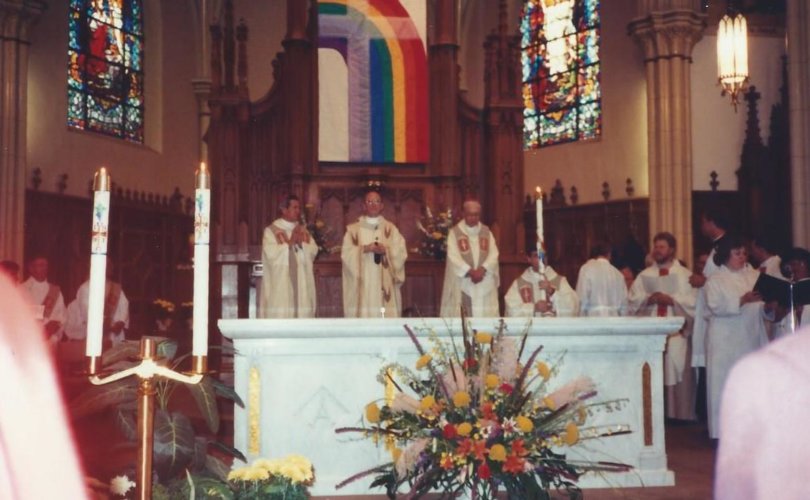 September 28, 2018 (LifeSiteNews) – The last pastor of Chicago’s first officially “gay parish,” Fr. Daniel Montalbano was found dead in his rectory bedroom hooked up to a “sex machine” in 1997, according to the pastor of Montalbano’s second parish in a recent video interview.

Fr. Montalbano had been the pastor of the “gay friendly” St. Sebastian parish until 1990, after a fire destroyed part of the interior the year before, leading to a permanent closing of the parish. The priest was then transferred to Resurrection parish. Two different homosexualist groups, Dignity Chicago and the Archdiocesan Gay and Lesbian Outreach of Chicago (AGLO), had used St. Sebastian parish for their meetings and activities with the blessing of Cardinal Joseph Bernardin.

Montalbano was himself a “practicing” homosexual, according to Fr. Kalchik, and had hung a flag with the rainbow “gay pride” colors and a cross superimposed on it in the sanctuary during the Mass after he had first moved to Resurrection in 1991. The flag appears to have been taken from St. Sebastian parish, where it had been used by the LGBT groups there.

Fr. Kalchik made the remarks in an interview with Michael Voris of Church Militant published on September 26, following the priest’s expulsion from Resurrection parish in apparent retaliation for burning the LGBT flag, an act which Cupich had ordered Kalchik to cancel.

Kalchik fled his parish and is now in an undisclosed location, hiding from Cupich out of fear of retaliation, following multiple threats reportedly made against him by archdiocesan officials, who want him to enter a mental health treatment program – a measure used commonly against priests who defy the gay agenda or strongly defend orthodox Catholic doctrine.

The priest’s testimony corroborates previously-published rumors of Fr. Montalbano’s horrific death, which also seem to be referenced in a memo released as a result of a discovery process regarding a priest accused of sex abuse of a minor, Jesus “Jesse” Garza, who was sent to Resurrection parish to administer it following Montalbano’s death.

The memo, which was revealed to the public by journalist Rod Dreher several days ago, was addressed to the file, and said of Garza, “I checked again to make sure that he did dispose of everything. Hopefully never to be found, connected with the past or to be used by anyone else in the future. He assured me it had. It was not an easy task. Filled more than his van once. [BLACKED OUT TEXT] did not get anything.”

The memo adds that “He has visited with [BLACKED OUT TEXT] and nothing of this past has come up in discussion.”

Deacons who discovered body told by archdiocesan officials, “Keep this to yourselves”

Fr. Kalchik gave Church Militant’s Michael Voris a detailed account of the discovery of Fr. Montalbano’s body by three deacons in 1997, shortly after his fiftieth birthday. He said that the archdiocese told the deacons not to speak about the circumstances of the priest’s death to anyone, and then held a lavish, three-day funeral for Montalbano.

“April of 1997, Daniel Montalbano turned 50 years of age – big birthday celebration – the former pastor, who was actively gay. And a couple of weeks later, in May, it’s a Sunday morning. The pastor doesn’t come down for the first mass of that day, which is a Spanish mass. There are three deacons there. The priest doesn’t come down. What do you do? Well, let’s find out what’s going on,” Fr. Kalchik told Voris.

“What do you do? You find the pastor dead naked in his bed, you call the police, because this is way beyond anyone just simply saying ‘oh.’ So, police were called, body was taken out. Presumably after you call police, police reports are filed, autopsy results are done, because this is a man at fifty years of age that died in strange circumstances.”

“This is the same man that put that accursed flag up, flag, I mean, depiction of our Lord’s cross, superimposed with the gay banner on it, so supplanting Jesus’s passion, death, and resurrection with something less than our redemption story,” noted Kalchik.

“Police cart out Fr. Montalbano, police cart out the sex machine, apparently to do some testing to see if there was a malfunction in the machine, to find out what really killed him. The three deacons who witness this in the end were given a couple of words from the folks downtown that run the archdiocese: ‘Keep this to yourselves, this has nothing to do with Resurrection parish.’ The same storyline they use all the time.”

“So in the aftermath of his death, instead of simply having a quiet, private event for close friends, family, you know, a sendoff to God, they have a full-blown, three day, over-the-top, wake and funeral for this man in Resurrection church.”

“But in the immediate cleanup process of Montalbano, one of the deacons removed two full closets of gay pornography. Not just, you know, a couple of items, but between videos, and books, and everything imaginable, it was all put into black hefty bags – a sizeable, two full closet fulls, and this is all carted out to some suburban Chicago forest preserve, and burned in one of those super-size cauldrons they have there,” concluded Fr. Kalchik.