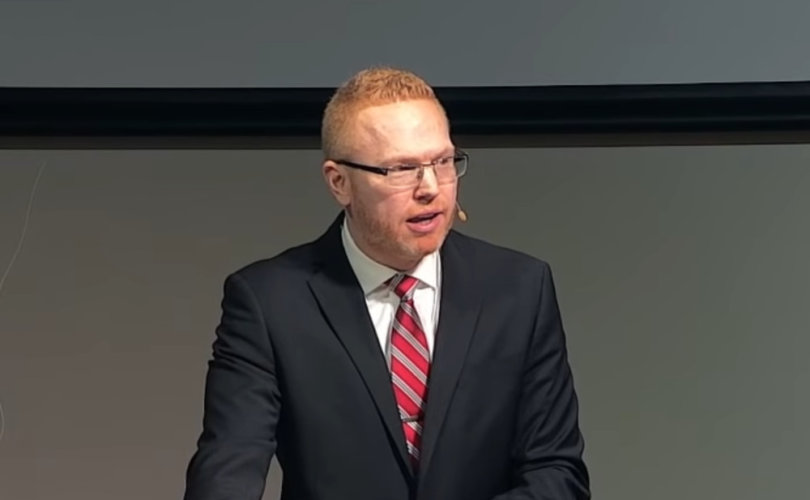 EDMONTON, Alberta, February 23, 2021 (LifeSiteNews) – Jailed Canadian Pastor James Coates took direct aim at government-imposed COVID-19 restrictions in Alberta in his last sermon before being locked up, saying he refuses to “give the government what isn’t theirs.” He said the government has “no jurisdiction” to tell churches what to do, adding it should repent.

“For the first time in my ministry, the government is reaching into the life of the church. That’s my domain, that’s the domain of the elders here at Grace Life Church, that’s the Lord Jesus Christ’s domain,” said Coates in a sermon titled, “Directing Government to its Duty.”

The sermon was Coates’ last before being jailed last week, and was given on February 14.

On that Sunday, Coates held a church service in violation of a January 29 order by Alberta Health Services (AHS) demanding that the church doors remain shut. Coates’ church is located in Spruce Grove, Alberta, close to Alberta’s capital city of Edmonton.

Coates was later notified by the RCMP that they planned to arrest him for defying the COVID-19 shutdown order. The police also asked him to turn himself in. Coates complied and was jailed for ministering to his congregation.

He remains in prison, awaiting trial, after refusing to agree to bail conditions that he promise not to hold more church services that violate government COVID-19 restrictions.

Coates said that government needs to be informed of its “God-ordained” purpose and that people have a “responsibility” to ensure leaders understand it is the church that is the pillar of truth.

In his sermon, Coates noted that the “reason we’re to be subject to the governing authorities” is because all “authority is from God.”

“That means all authority originates with God, which means all authority is delegated authority, and that means the governing authorities are accountable to who? To God,” said Coates. “In other words, the governing authorities have a stewardship from God for which they will be judged. They are not autonomous, they are not sovereign they are servants of God.”

Coates noted that the way to counter “unjust” government rules can take many forms, such as writing one’s local MLA or the Premier of the province.

He then noted more “confrontational” ways to protest, such as initiating a legal dispute, or ultimately, to do what his church has done and continues to do: to meet contrary to local COVID-19 edicts.

“You can also do what we’re doing. By meeting were testifying the government has no jurisdiction here, not with regard to our worship, by simply being open, and by garnering the attention we have which is not our choice but it is come,” said Coates.

Coates noted that if a government realizes they are accountable to God but choose to restrict religious freedoms, they are “suppressing the truth.”

Coates then said that if “the church refuses to fulfill this role and function,” then it’s “walking in negligence.”

“I’m doing what I am doing in obedience to Christ,” noted Coates.

In his sermon, Coates noted that complying with “unbiblical and unjust government laws is neither faithful nor loving.”

Coates also mentioned that the “right to life,” the right to “work,” and the right to be with one’s family, especially when they are dying, are fundamental rights.

Coates called for respect for law enforcement, but that they need “to do the right thing,” noting that he has received a lot of support from officers across the country.

This past Saturday, Coates’ wife told a crowd gathered at the jail site where her husband is being held that the best way to protest his incarceration is to “open your churches.”

At the protest, Erin Coates also encouraged the crowd to listen to her jailed husband’s last sermon, given on February 14.

Under the current Alberta COVID rules, churches and other places of worship can operate at no more than 15 percent of the capacity allowed by the building fire code. Masks are mandatory, as are the sanitation of hands and keeping away from other people.

Grace Life said that the frequent inspections by AHS officials could be “a potential criminal offense, pursuant to section 176(2) of the Criminal Code of Canada,” which bans the interrupting or disturbing of a religious worship service.

Last week, the Premier Jason Kenney of Alberta released a statement regarding the jailing of Coates, saying his imprisonment is “unfortunate,” but that Coates had “flagrantly” violated COVID rules.

Kenney went on to proclaim that he is protecting “fundamental freedoms of religion” in his province, despite the fact that Coates remains behind bars.

Kenney also took aim at Coates’ sermon. He said during a talk-show interview with radio host and former Alberta MLA Danielle Smith that Coates is irresponsible for delivering “libertarian sermons” during COVID-19, noting that he would not get involved in what he considers to be a “legal case.”

According to the legal team representing Coates and Grace Life, however, Coates was — despite claims from Kenney — “jailed” for holding a church service.

When speaking of Kenney, Coates said that it’s “interesting our Premier just recently wanted to talk about the death rate and how the death rate is greater in South Dakota than it is in Alberta.”

Over the weekend, an anti-lockdown protest was held in Medicine Hat outside the office of Alberta United Conservative Party (UCP) MLA Drew Barnes, with many present voicing their support for Coates.

Barnes has been one of the few Alberta MLAs from Kenney’s government who has publicly voiced opposition to his government's COVID-19 lockdowns.