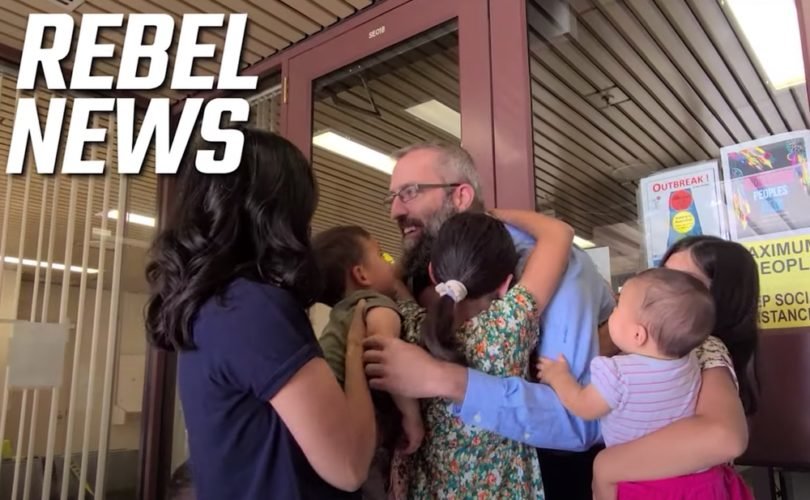 Pastor Tim Stephens is greeted by his family as he leaves jail.Rebel News / YouTube

CALGARY, Alberta, July 2, 2021 (JCCF) –  The Justice Centre for Constitutional Freedoms is pleased to announce that Pastor Timothy Stephens of Fairview Baptist Church was released from the Calgary Remand Centre earlier today. Pastor Stephens has been in jail since Monday, June 14. Justice Centre lawyers have been working on his release for the past ten days, ever since it was announced that the Whistle Stop Café Injunction would be set aside, and that all orders of the Chief Medical Officer of Health (CMOH) would be rescinded and cancelled.

The Justice Centre also confirms that Fairview Baptist Church in Calgary, and Grace Life Church near Edmonton, have been unchained and released from government seizure and will be returned to their congregations effective July 1.

Pastor Stephens was first arrested on May 16 and spent two nights in jail. His second arrest on June 14 was also in respect of peacefully exercising his Charter freedoms in the face of public health orders.

On the afternoon of Monday, June 14, the Calgary Police Service (CPS) arrived at Pastor Stephens’ house and arrested him in front of his wife and eight distraught children. A video of the arrest is available on Twitter, showing Pastor Stephens being hauled away by CPS as his eight children and his wife weep in the driveway of their Calgary home. Pastor Stephens is seen reaching through the bars of the police cruiser to touch hands with his horrified children before being taken away.

This June 14 arrest of Pastor Stephens relates to an alleged outdoor church service held on June 6, 2021 in Calgary, with about 200 congregants of Fairview Baptist church. A police helicopter was deployed to search for and detect this peaceful outdoor gathering, and to collect evidence against Pastor Stephens of non-compliance with public health restrictions. The Pastor was charged with an offense under s.127 of the Criminal Code of Canada, alleging failure or refusal to comply with a Court Order. The Alberta government has failed to produce any evidence that outdoor services are a threat to public health.

Pastor Stephens was previously arrested and jailed after leading a church service at Fairview Baptist on Sunday, May 16, on the basis of a May 6 court injunction issued against Whistle Stop Café in Mirror, Alberta, in a secret court proceeding.  Pastor Stephens was in jail for three days. The Alberta Crown has now admitted that his arrest was unlawful.  A lawsuit against the Crown for damages is pending.

Pastor Stephens has been ticketed several times for allegedly breaching Dr. Deena Hinshaw’s public health orders. The Justice Centre is representing Pastor Stephens regarding those tickets and intends to argue that they must all be thrown out because of the unlawful arrest of Pastor Stephens on May 16, which breached several of his Charter rights.

At the trial of Pastor James Coates in May 2021, the Alberta Government, after more than 13 months of imposing lockdowns, was unwilling or unable to produce any evidence in court to justify its violations of Charter freedoms.

In a different court action filed in December of 2020, the Alberta Government persuaded the court to give it until July of 2021 to produce evidence to justify lockdowns. No evidence has been filed to date.

The Kenney government in Alberta, including Health Minister Tyler Shandro and Chief Medical Officer Dr. Deena Hinshaw, have engaged in a months-long systematic attack on peaceful worship, arresting and incarcerating three Christian pastors for the “offence” of peacefully gathering to worship, and barricading the pastors’ churches with an intimidating show of police force of scores of officers. Pastors and congregants were issued tickets totaling tens of thousands of dollars, and churches had their locks changed and double and triple fencing erected around them. Health officials and police worked in consort to spy on congregants and church leadership.

“The Kenney government’s persecution of Christians for the “crime” of peacefully assembling for worship will not, and must not be forgotten,” states Jay Cameron, Litigation Director with the Justice Centre.

“The Alberta Crown has failed entirely to produce evidence to justify its tyrannical lockdowns, a prerequisite under the Charter to justify lockdowns measures that have inflicted much harm on Albertans in the past fifteen months,” concludes Cameron.

Published with permission from Justice Centre for Constitutional Freedoms.