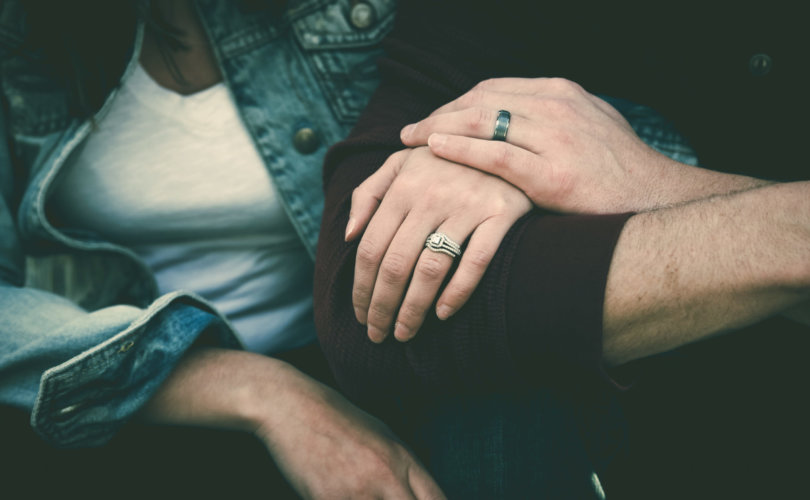 The Council on Biblical Manhood and Womanhood (CBMW), a coalition of mostly Southern Baptist and Presbyterian leaders, met to address increasing societal “confusion” about gender and sexuality. The scholars, pastors, authors, radio personalities, and others co-signed a “Nashville Statement” delineating 14 brief, simple affirmations and their contrasting denials regarding natural marriage.

Released Tuesday, the joint statement connects the acceptance of one’s biological gender and fidelity to traditional marriage with God’s intentional plan for all people.

“Western culture … has embarked upon a massive revision of what it means to be a human being,” the statement said. Gender is considered a matter of “an individual’s autonomous preferences.” But this revision leads to “shortsighted alternatives that … ruin human life and dishonor God.”

The solution to this modern dilemma, they say, is found in knowing God and His will for mankind. “To forget our Creator is to forget who we are, for He made us for Himself … We did not make ourselves,” the evangelicals stated. “Our true identity as male and female persons is given by God. It is not only foolish but hopeless to try to make ourselves what God did not create us to be.”

Monogamy is also divinely ordained for our good. “Sexual intercourse before or outside marriage” is never justified, the authors asserted.

God created two genders, male and female, as “equal before God as persons,” yet “distinct,” the signers offered. Gender differences do not mean one is superior to the other.  “We deny that the divinely ordained differences between male and female render them unequal in dignity or worth.”

The statement unequivocally puts homosexuality and transgenderism outside of God’s loving will. “A homosexual or transgender self-conception” is against “God’s holy purposes,” the leaders explained. Same-sex attraction is not “natural,” but those suffering from it may still have “the hope of the Gospel” and “live a rich and fruitful life” if they “walk in purity.”

The source of sexual deviancy is sin. “Sin distorts sexual desires,” according to the evangelical leaders, leading to “both heterosexual and homosexual immorality.”

Christians who go along with prevailing views of sexuality are hurting their neighbor and denying the Faith. “It is sinful to approve of homosexual immorality or transgenderism,” the statement flatly stated, adding that to approve of either “constitutes an essential departure from” Christianity. Such moral matters are not something Christians can “agree to disagree” on.

An increasing number of states and municipalities have passed laws banning “reparative therapy” under the presumption that homosexuality is unchangeable. In contrast, the Nashville Statement affirmed that Jesus Christ has the power not only “to forgive all sexual sins” but to transform homosexual and transgender lives. “The grace of God in Christ enables sinners to forsake transgender self-conceptions” and accept “one’s biological sex,” the authors claimed.

A common argument to justify transgenderism is pointing to rare cases of gender deformities. The signers first affirm that all humans, including “those born with a physical disorder of sex development are created in the image of God and have dignity and worth.” They said sexually handicapped people “are welcome” and “should embrace their biological sex insofar as it may be known.” They suggested an explanation may be found in Jesus’ teaching that there are “eunuchs who were born that way from their mother’s womb” (Matthew 19:12).

As is typical among evangelicals, their statement concluded with an invitation.  “Forgiveness of sins and eternal life are available to every person who repents of sin and trusts in Christ,” they said, assuring that no sinner is “beyond His reach.”

Trump advisers Tony Perkins of the Family Research Council and pastor Jack Graham also signed. The Huffington Post reported that Perkins was one of the architects behind the president’s ban on transgenders in the military.

CBMW president Denny Burk explained that the reason Christian leaders made the statement is “to shine a light into the darkness.” His intended audience is fellow believers, to “provide help for churches and Christian organizations that are looking for biblical guidance on how to address homosexuality and transgenderism.” He also hopes to convince individuals “under pressure to abandon scriptural teaching.”

CBMW co-founder John Piper predicted the Nashville Statement will be “enormously helpful for thousands of pastors and leaders hoping to give wise, biblical, and gracious guidance to their people.”

Many of the signers expressed grave concern with the direction Western culture is going.  “In our day truth is being forsaken … in the name of love,” Reformed Theological Seminary chancellor Ligon Duncan said. “In the present generation, confusion and perversion surrounding gender, marriage, and human sexuality … define our times,” Jason Allen, president of Midwestern Baptist Theological Seminary, sadly noted.

The growing confusion over gender and compromise of the natural law are not unique to pagans. “The velocity of cultural change” has made “many Christians perplexed and confused” on homosexuality and transgenderism, Sovereign Grace Churches’ Jeff Purswell said. “The Nashville Statement provides much needed clarity … with courage, compassion, and biblical fidelity.”

“The internal contradictions of the transgender revolution reveal the essential problem with its central claims,” Mohler said. “We owe it to our brothers and sisters in Christ and we owe it to a watching world to speak clearly on the most basic truth of what it means to be human, what it means to be male and female.”

“The Sexual Revolution cannot keep its promises,” Russell Moore, president of the Southern Baptist Convention’s Ethics and Religious Liberty Commission, said.  “The church must stand ready to receive with compassion the many who are in need of a better hope.”

“Gender confusion is rampant and lives are being damaged as a result,” Daniel L. Akin of Southeastern Baptist Theological Seminary said. “The transforming power of the gospel sings throughout the document, offering clarity and hope.”

“In a time of cultural confusion,” Cedarville University president Thomas White pointed out, “believers must … love others enough to tell the truth.”

Jacksonville Shiloh Metropolitan Baptist Church pastor H.B. Charles Jr. expressed his “hopeful prayer that the Lord would use this statement to offer the freedom of Christ to those who are in sexual bondage, confusion, and deception.”

“Our Creator knows us best, and what is best for us,” Biola Theology professor Erik Thoennes said. His “earnest prayer” is that “many will find life and joy in the enjoyment of God and of his good design for women and men.”

Leader after leader said they were willing to endure societal persecution over their stand.  “In order to be truly for the world, when the world is going the wrong way, you must be against the world,” the National Religious Broadcasters' Johnson admitted. Saint “Athanasius knew this when he positioned himself (against the world). For the good of our world we position ourselves … against the sexual heresy that is the spirit of our age.”

The CBMW was founded in 1987 when leaders rallied around “the Danvers Statement,” also named for its city of origin. The Danvers Statement was a response to “feminist egalitarianism” and proclaimed that “distinctions in masculine and feminine roles are ordained by God as part of the created order, and should find an echo in every human heart.”

The Danvers Statement called on men to rise up as Christlike servant leaders of their families, and women to rise up to the high calling of motherhood and domesticity.

In a sign of how far society has drifted away from traditional values, the Nashville Statement could not assume a binary understanding of gender as a common starting point.  Instead, its authors had to begin with a defense of male and female itself.

Immediately after the statement’s release on Tuesday, a torrent of pro-homosexual criticism was unleashed against the statement and its signers. The Twittersphere was flooded with comments such as Nish Weiseth characterizing the document “a gross example of pastoral and leadership malpractice.”

Nashville mayor Megan Barry took offense at the statement’s nickname. The “so-called ‘Nashville Statement’ is poorly named and does not represent the inclusive values of the city and people of Nashville,” she tweeted.

Michael Brown, host of the “Line of Fire” radio program, noted the Nashville Statement is “nothing controversial” but merely reasserts truths “taught by the church for the last two millennia.”

Nevertheless, dissenters have accused the statement of being “an affront to God’s creative design” and a theology that “breeds death,” not realizing the irony of their words.

Former evangelical Jen Hatmaker characterized the statement as creating “shame, self-harm, suicide, and broken hearts, families, and churches.” Hatmaker even associated the Nashville Statement with white supremacy at the Charlottesville riots and the death of Heather Heyer two weeks ago.

Brown calls Hatmaker’s “irrational” association “a striking illustration of the power of spiritual deception” stemming from embracing lies. He added the prayer, “May God awaken those deceived by LGBT theology.”

Other former believers in biblical truth came out against the statement as well. Jesuit priest James Martin, known for his support for sodomy, tweeted seven counter-statements, accusing the Nashville Statement of insulting and judging people.

“I deny that Jesus wants us to insult, judge or further marginalize” gays, Martin tweeted.  He added his belief, in contradiction to his own church’s teaching, that unrepentant homosexuals and homosexual activists are “full members of the church” and “some of the holiest people I know,” presumably in good standing for communion.

In a final tweet that critics called blasphemy of the Holy Spirit, Martin claimed that openly practicing homosexuals are led by the guidance of the Third Person of the Holy Trinity.

Burk’s response to self-designated “Christian” critics? “Anyone who persistently rejects God’s revelation about sexual holiness and virtue is rejecting Christianity altogether,” he answered, “even if they claim otherwise.”

LGBTQ activist pastor Brandan Robertson, who organized a protest demonstration against the conference where the Nashville Statement was signed, said the statement was “despicable” and predicted it will “cause verifiable psychological harm to LGBT+ Christian youth in churches around the world.”

Nashville Statement signers say they are mischaracterized by such critics.

Several signers emphasized that the Nashville Statement condemns no one but rather humbly offers forgiveness to those with ears to hear. The statement is “permeated by the awareness that we are all sinners in need of divine grace through Jesus Christ,” Bethlehem College and Seminary chancellor John Piper emphasized. “No sexual sin is beyond forgiveness and healing.”

“At the heart of this statement is genuine love for our neighbor,” Tabletalk editor Burk Parsons concluded. “For it is only when we know and believe the truth that we will experience genuine freedom in Jesus Christ.”

The entire statement may be read here.