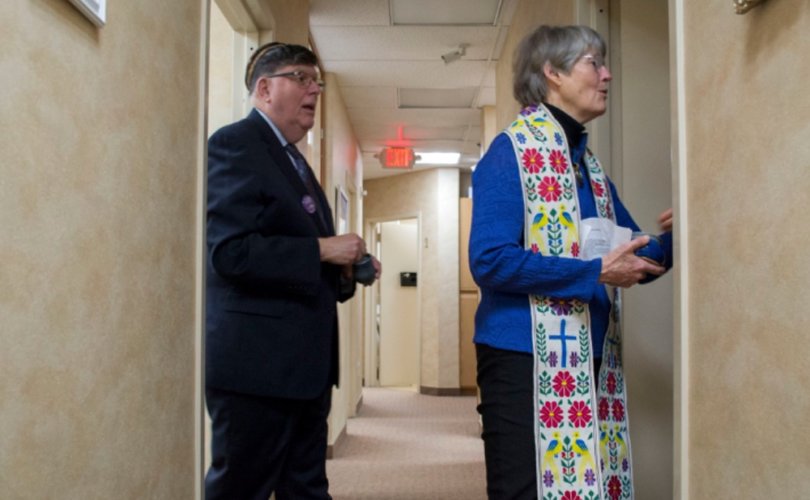 Described by the Washington Post as an “unusual interfaith ceremony,” the “blessing” occurred at LeRoy Carhart’s new Bethesda, Maryland abortion facility, which is operating under the name AbortionClinics.org, Inc.

“The Supreme Court affirmed a woman’s right to choose an abortion. But before the Supreme Court did it, God had already done it, because it affirms a woman’s moral agency,” said Veazey. He prayed that God would keep Carhart and his abortion staff “safe” and “strong.”

“And may they always know that all that they do is for Thy glory,” he said.

Jackson is the Executive for Religious Leadership and Advocacy at the Religious Coalition for Reproductive Choice. Veazey also has been associated with that group, and the Post report indicated the “blessing” was organized at least in part by them.

“A Hindu priest who was supposed to attend from a local temple, who has blessed an abortion clinic before, didn’t make it,” according to the Post. “The staff of the clinic and visitors from the Religious Coalition for Reproductive Choice sang hymns.”

Carhart said his work aborting babies in the 30th week of pregnancy and beyond is “religious” and how he lives out his faith. He said many of his patients ask him if God will forgive them as they “sit on the table” before their abortions.

At the ceremony, “the clergy sprinkled water in each room of the clinic and in the parking lot” as a “symbol of sanctification.”

Father Frank Pavone, the National Director of Priests for Life and also the President of the National Pro-Life Religious Council (NPRC), told LifeSiteNews the clergy who “blessed” the abortion center are way out of the mainstream.

“The Religious Coalition for Reproductive Choice, as we have pointed out in the book ‘Holy Abortion?’ (commissioned by the NPRC), is far out of the mainstream of America and the Church,” said Pavone. “Most who identify themselves as ‘pro-choice’ would be abhorred by what Carhart and other late term abortionists do.”

Priests for Life has conducted a series of undercover calls to abortion facilities – including Carhart’s – around the country focusing on how easy it is to obtain a late-term abortion.

“Women can call certain abortion clinics and say they are 30 weeks pregnant, fully healthy, and carrying a healthy baby, and still get an appointment to have that baby killed,” said Pavone. “For clergy to say that is OK qualifies them as false prophets.”

In February 2013, 29-year-old Jennifer Morbelli died after Carhart aborted her 33-week-old baby in Maryland. In 2005, he botched a third trimester abortion on a woman with Down syndrome, Christin Gilbert. She died. He has been involved in numerous botched abortions and medical malpractice cases.

The pro-life group Live Action also exposed Carhart’s callousness in its Inhuman series. Carhart joked about breaking up the babies he aborts with a “drill bit” and a “pickaxe.”