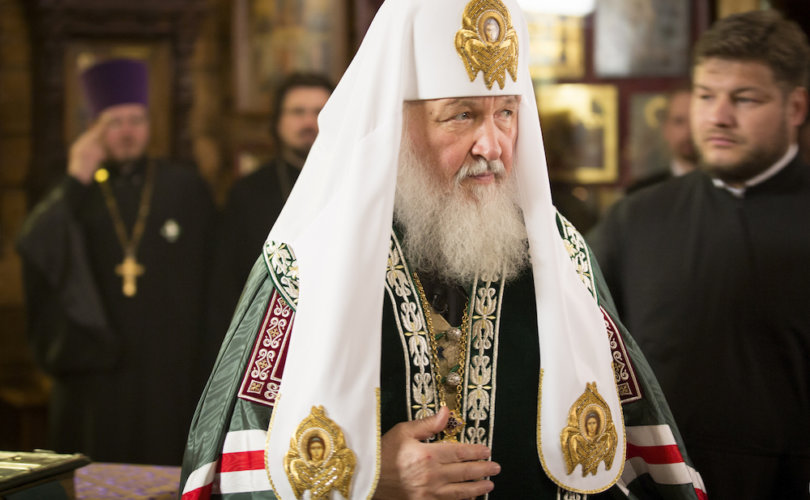 MOSCOW, October 3, 2016 (LifeSiteNews) — After nearly a century of Communist state-sponsored, unrestricted abortion, a powerful and growing pro-life conscience is being resurrected in Russia.

More than 300,000 Russian citizens, including Patriarch Kirill of Moscow and President Putin's newly appointed Children's Rights ombudsman, have signed a petition calling for “the end of legal murder of children before birth,” a complete ban on abortion throughout the country.

Petition organizers' goal is one million signatories to take the petition to Putin himself.

Working together with the Russian Orthodox Church, the petition also calls for a ban on abortifacient contraception, or “morning-after pills,” which organizers say are nothing more than “legal infanticide,” and, “an act similar to pagan sacrifices of children.”

Signers reason that abortion hurts women's health, both physically and psychologically, and damages the demographics of the nation.

The petition warns that legalized abortion brings about “the loss of God's blessing,” which could lead to military defeats and social disasters.

Petitioners also argue that state-sponsored abortion in Russia's universal healthcare system violates the rights of pro-life citizens whose taxes pay for it.

In concert with an abortion ban, the petition calls for official recognition that human life begins at conception, legal protection for all babies in the womb, and better support for pregnant women and young children.

“These are restrictions on abortion we in the West are still fighting for,” Father James Rosselli of the Russian Orthodox Church Outside Russia told LifeSiteNews. In addition, Fr. Rosselli said that in Russia now “large families are encouraged.”

Patriarch Kirill, leader of the nation's 150,000,000 Orthodox Christians, signed the petition, and thanked and gave an archpastoral blessing to the petition organizers. His Holiness has called abortion “a national catastrophe” that kills “more than one million of our fellow citizens every year.”

“Patriarch Kirill publicly signed the pro-life petition 'as a private citizen,' declaring, rightly, that 'any priest would do the same,'” Fr. Rosselli pointed out.  “That sent a powerful message.”

Another key signer was Anna Kuznetsova, the priest's wife and mother of six who was recently appointed by President Putin to head Russia's Children's Rights Commission.

Western journalists have misrepresented Patriarch Kirill's support, calling it a “hardening (of) the position of the church that previously only called for a ban on state-provided abortions which weren't a medical necessity.”

While it is true that the Orthodox Church in Russia has aggressively called for a halt to tax-funded abortion and for abortion coverage to be taken out of the nation's universal healthcare, Fr. Rosselli clarifies that Orthodoxy is and has always been unequivocally against any and all abortion.

“The Church is, as it has always been, uncompromisingly against abortion,” he said.

The country's Liberal Democratic Party opposes a ban on abortions.

Fr. Rosselli said he was encouraged by the growing national pro-life movement.  “It takes a long time for the light to finally overcome 70 years of brutally-enforced darkness, and Parliament's hold-over Communists in the Liberal Party are doing their best to hold it back, but the Church is flourishing and growing and 'Holy Russia' is reawakening,” he said.

“We in America must pray and work for a similar awakening, that we might recover our own sanity to once again become a moral force in the world.”