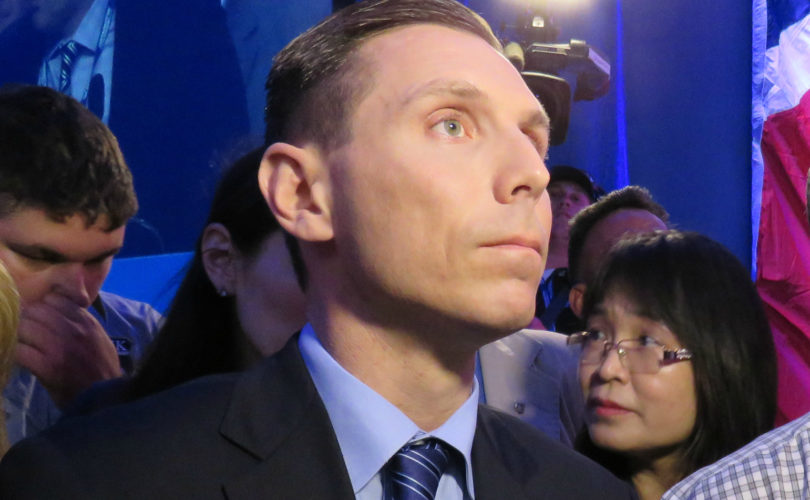 TORONTO, November 29, 2016 (LifeSiteNews) — Ontario Progressive Conservative leader Patrick Brown pressured his MPPs to either vote for the radical pro-LGBTQ Bill 28 or absent themselves, sources within the party have told Campaign Life Coalition.

The controversial bill, which legally redefines the family — including substituting “mother” and “father” for parent — to accommodate homosexual activists, was passed unanimously at Queen’s Park Tuesday by 79 MPPs from all parties.

“Our sources in the Progressive Conservative Party told us that Patrick Brown pressured his caucus to either vote for the bill or to stay away,” Campaign Life vice president Jeff Gunnarson told LifeSiteNews.

“So much for the Conservative tradition of allowing free votes on issues of conscience,” Gunnarson said.

“This just goes to show that the PC Party under Brown has no tolerance for different views and is not nearly as inclusive as he claims it is,” he said.

“Plus, Brown has shown that he is a dictator in the style of Liberal Prime Minister Justin Trudeau, who infamously banned pro-life candidates from running for the Liberal Party.”

Twenty-eight MPPs were absent for the vote, including both Liberal Premier Kathleen Wynne, and NDP leader Andrea Horwath.

In fact, Tory leader Brown was the only party leader present for the vote.

PC MPPs Monte McNaughton and Rick Nicholls, both green-lighted by CLC as supportable as pro-life and pro-family, were not present.

But voting for Bill 28 was Liberal MPP and Catholic Lou Rinaldi, who has been green-lighted as supportable by Campaign Life Coalition.

Newly elected PC MPP Sam Oosterhoff, known for his social conservative views, had not yet been sworn in after his surprise November 19 victory.

PC MPP Mike Harris had proposed an amendment November 1 that Bill 28 allow “mother” and “father” as well as “parent,” in state-registered documents, but that amendment was voted down.

Harris was not present for the final vote.

Other pro-family groups have criticized the Liberal government for pushing through the controversial “All Families Are Equal Act” with unseemly haste.

Bill 28 “completely turns on its head the former understanding of ‘family’ which consisted of individuals united by marriage, blood and adoption,” echoed Gwen Landolt of REAL Women in an October 16 critique.

The All Families Are Equal Act legally redefines “mother” and “father” as “parent” to accommodate homosexuals who conceive children through reproductive means.

Parents As First Educators (PAFE) as well as CLC and REAL Women have been urging people to protest the legislation, which critics say will have far-reaching consequences.