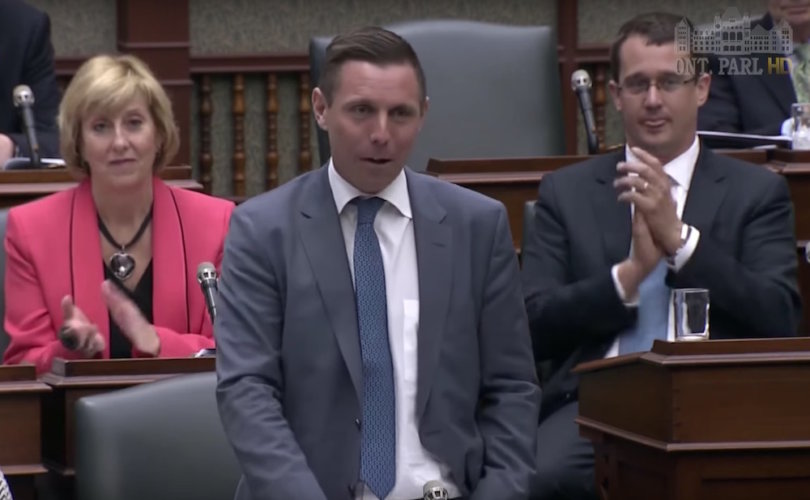 OTTAWA, November 3, 2016 (LifeSiteNews) — A candidate rejected by the Progressive Conservative Party in the Carleton riding nomination race claims that leader Patrick Brown has rigged the contest in favour of his preferred candidate, Goldie Ghamari.

Ghamari was rejected in 2014 as a nomination candidate by the federal Nepean federal Conservative EDA, on the basis of a document alleging she had expressed anti-Christian, anti-conservative, and pro-liberal views online, according to opponent Jay Tysick.

But more to the point, Tysick says Brown didn’t give party members in the riding a chance to decide if they wanted Ghamari as their chosen representative.

Tysick told LifeSiteNews that 400 of what he estimates were 800 PC members signed up at that point in the newly created riding were committed to voting for him in the November 5 nomination election.

But he received a curt one-sentence e-mail last Friday from PC Party executive director Bob Stanley stating that his nomination papers had been rejected. “No reason was given, nor has one since been given, despite my request for one,” Tysick said.

And Tysick isn’t the only aspiring nomination candidate crying foul.

Doug Thompson, an Ottawa city councillor for 31 years, dropped out of the race in September, citing “partisan party politics” and “unfortunate and questionable actions faced by my team,” according to MetroNews.

Both Tysick and Thompson allege these actions seem to favour Ghamari, an Iranian-born 31-year-old international trade lawyer from Ottawa, whose website lists her as an associate director for the Carleton riding association.

Thompson has publicly criticized the election of the executive at the riding association’s August 31 founding meeting at the Alfred Taylor Centre in North Gower.

“There was no guideline for the meeting itself; there was no oversight,” he told Ottawa South News. He described people mistaking Ghamari’s table for a registration table, and Ghamari’s team handing them a list of her slate of candidates for executive positions.

“People were just copying her list right onto the ballot,” Thompson said. “I think they hold better elections in Somalia.”

“People in politics know that once you’ve done something like that, you own the riding association,” Tysick told LifeSiteNews. “They’re going to do everything else they can too, up to and including kicking someone out who is challenging them.”

Tysick, one-time chief-of-staff for Ottawa councillor Rick Chiarelli, was on Thompson’s team and believes the party “railroaded” Thompson out.

In fact, Thompson’s dropping out spurred Tysick, who runs a communications consulting firm that specializes in lobbying politicians and has a 30-year relationship with the riding, to enter the race in early October because he felt strongly Ghamari’s run should be contested.

According to Tysick, the riding association arbitrarily changed the filing deadline for memberships to accommodate other candidates, and advanced the election date as his momentum grew.

“The date was supposed to be in the New Year, they moved it to mid-November when I entered, then while I was doing well, they moved it again to the beginning of November, and then they just kicked me out,” he said.

“I expected fully dirty tricks and I was prepared for them. What I didn’t expect was that final stance of just don’t let him. This is a democracy, anyone can run.”

Tysick also pointed out that the venue for Saturday’s election, the Alfred Taylor Centre in North Gower, holds only 350 to 400 people, and there will likely be over 1,000 members eligible to vote. Tysick believes this is a voter suppression tactic.

Members received notice on October 20 that only people in the building before the one-hour election began at nine could vote, and that “there will be no exceptions.”

Since disqualifying Tysick, the riding association has changed this, expanding voting time to two hours and extending eligibility to vote to those who arrive before 11:00 a.m.

Ghamari rejected by Nepean EDA in 2014

According to Tysick, the Nepean federal Conservative EDA rejected Ghamari in 2014 based on an anonymous document which surfaced at that time: a dossier of her online “footprint” that includes Twitter, Reddit, livejournal and Facebook posts that Ghamari allegedly made under the name “Persiancat,” as well as Wikipedia entries, and which she subsequently deleted.

Ghamari told LifeSiteNews in an email that she is “familiar with this slanderous, racist, and sexist document” which she described as “a product of disgraceful bullying and harassment by online attackers.”

“Over the past 6 months, I have been talking with conservatives all across Carleton,” Ghamari wrote. “The real issues that are important here are making sure people can afford their hydro bills, ensuring the future of healthcare is in good hands and protecting property rights.”

When asked if she denied authoring posts under the name “Persiancat,” Ghamari refused to respond on the record.

The unattributed document is now posted on Imgur, and on the Facebook page of conservative talk-radio personality Nick Vandergragt, who told LifeSiteNews he got a call “from someone within the PC Party who is also a friend and who was worried that posting this information may be grounds for a lawsuit.”

“But this stuff is all public domain, so there’s no grounds for a lawsuit,” he said, adding that the “person who did it is a very good friend of mine, so I trust the information. I am willing to vouch that it is in fact accurate.”

One of the more disturbing “Persiancat” tweets, undated but identified by the source as from six years ago, stated: “Jesus was just another human like me and you. He died and became worm food so get over it and stop advertising your religion it’s gay.”

Another “Persiancat” tweet from 2011 commended federal Liberal leadership contender Michael Ignatieff: “You are too educated and well-mannered for the Canadian population. Thank you for running a clean, smear-free campaign.”

“Now as I stated on my Facebook page, if you want to run as a Conservative you really ought to be one,” Vandergragt said. “And if you looked at some of the stuff that ‘Persiancat’ has posted, she’s a lot of things, but a Conservative isn’t one of them.”

Vandergragt, who was let go from 580 CFRA about nine months ago, launched his “[email protected]” radio show online just as the Carleton nomination race was heating up.

He says he’s heard from many people upset with the Progressive Conservative leader, and that he, too, is “frustrated” that Brown is handpicking candidates “against the wishes of the people.”

“As long as this continues, that Mr Brown has decided to become a Liberal in a Tory tie, then I’m going to continue to point it out,” added Vandergragt.

Moreover, the Carleton nomination controversy must be seen in the context of Brown’s history with social conservatives, Vandergragt noted.

“What Mr. Brown has done is thrown the so-con vote under the bus and angered literally tens of thousands of people that he did not have to anger, and that he will never get back,” he said.

While Brown courted the social conservative vote in his leadership bid, he has since come out strongly in favour of LGBTQ rights, marched in Pride Parades, reversed his former pro-life stance on abortion as a federal MP to now champion a woman’s “right to choose,” and notoriously flip-flopped on the Liberal government’s sex-ed, repudiating earlier promises to repeal the controversial program.

Brown has denounced the Liberals for the Sudbury by-election scandal, which has now resulted in Premier Wynne’s top campaign organizer, Pat Sobara, and Liberal operative Gerry Lougheed being charged with bribery, as the Globe reported Tuesday.

Sorbara and Lougheed are accused of offering Andrew Olivier a government job to withdraw from the nomination race in favour of the Liberals’ preferred candidate, Greg Thibeault.

While Ghamari has one remaining rival for the Carleton nomination, Ohio-born, recent Carleton University political science graduate, Brandon Purcell, Tysick believes the fix is in.