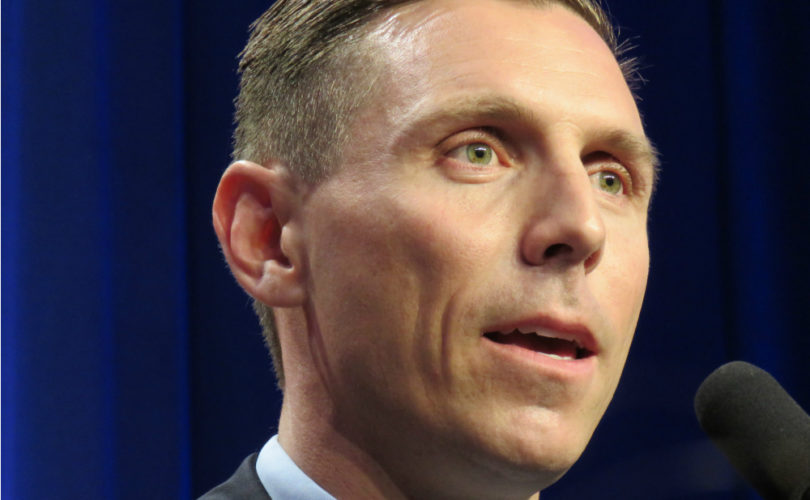 “We’re very pleased with the efforts of staff, volunteers and supporters who rolled up their sleeves and went to work on this leadership campaign, from purchasing memberships and voting to volunteering with CLC and on the leadership campaigns,” Gunnarson told LifeSiteNews. “We send out a heartfelt congratulations to Patrick and to all of our people for a job well done!”

The bachelor MP from Barrie trounced the 60-year-old Elliott in her second run at the leadership, winning 61.8 percent of the vote, or 83 of 107 ridings.

But as QP Briefing reporter and political blogger Brian Platt pointed out, the seemingly indefatigable Brown logged 10 events a day during almost 10 months on the stump. “He signed up so many members that he could lose half of them and still win. Christine Elliott did not have that luxury.”

Brown claimed in April to have signed up 41,000 new members, and PC officials stated the party had 76,587 members eligible to vote in the May 3 and 7 elections.

At least 5,000 of these were CLC supporters, Gunnarson said. “According to our get-out-the-vote analysis, we know we had a roughly 80 percent turnout ratio, and they voted for Patrick.”

Given the 49.3 voter turnout rate (an estimated 38,000 voters), CLC supporters accounted for approximately 20 percent of Brown’s vote, calculated Gunnarson, who added this did not include social conservatives and pro-lifers who are not directly affiliated with CLC.

CLC president Jim Hughes echoed this, stating: “The pro-life and pro-family vote is a significant block in Patrick Brown’s winning coalition and will continue to be active within the party.”

The three-term Conservative MP has a perfect voting record on life issues at the federal level, according to CLC. During his PC leadership campaign, Brown joined MPP Monte McNaughton in criticizing the Ontario Liberals’ radical sex-ed curriculum.

“The media claims social conservatives infiltrated the PC Party and took control,” Hughes said. “In fact, these people are regular folks who oppose the anti-life and anti-family agenda at Queen’s Park under Kathleen Wynne, especially her radical and inappropriate sex-ed curriculum.”

“Our supporters exercised their democratic right, like tens of thousands of other Ontarians, to vote for a party leader that would respectfully listen to their concerns.”

Brown, who in his victory speech described McNaughton as a friend and praised him for “the courage of his convictions,” told National Post reporter Ashley Csanady Sunday that he would “go back to the drawing board” on the Liberals’ controversial sex-ed curriculum.

“One of the biggest frustrations is the consultation that was promised didn’t happen. It didn’t,” Brown said, adding that, despite Liberal denials, opposition to the controversial sex-ed curriculum is widespread. “70,000 plus people have signed a petition against it. That’s not a few. You have parents pulling kids out of school around the province. That’s not just a few.”

Indeed, a May 8 Globe and Mail report stated opposition to Wynne’s radical sex-ed curriculum has reached “critical mass,” with 25,000 parents signing on to pull their children from public schools in the fall if the Liberals’ radical sex-ed curriculum is rolled out as planned. A strike staged by angry parents last week saw 35,000 kids absent from Toronto’s public elementary schools the first day.

Brown, who voted against same-sex “marriage” in 2005, told the National Post’s Csanady that “I’ve attended Pride events in the city of Barrie, and I would do so again and look forward to doing so again.”

However, when CBC’s Matt Galloway pressed him on whether he’d attend Toronto’s Pride Parade, Brown evaded the question, saying he’s “attended events from every walk of life in every corner of the province,” but he hasn’t announced his July schedule.

Brown received a standing ovation at Queen’s Park Monday morning, where he spoke along with Quebec Premier Phillippe Coulliard, and where, according to a tweet by Toronto Star political bureau chief Robert Benzie, a reporter called him “Premier Brown.”

But Brown’s triumph over Elliott, an early favorite in the race who was endorsed by 19 caucus members, shows he’s a force to contend with, as TVO presenter Steve Paikin tweeted May 9. “All the Liberals who were sounding so smug in the face of Brown may have to reconsider. This win is big.”

The newly minted leader will resign his federal seat May 13, but has not announced when he will run for a seat in the provincial legislature.