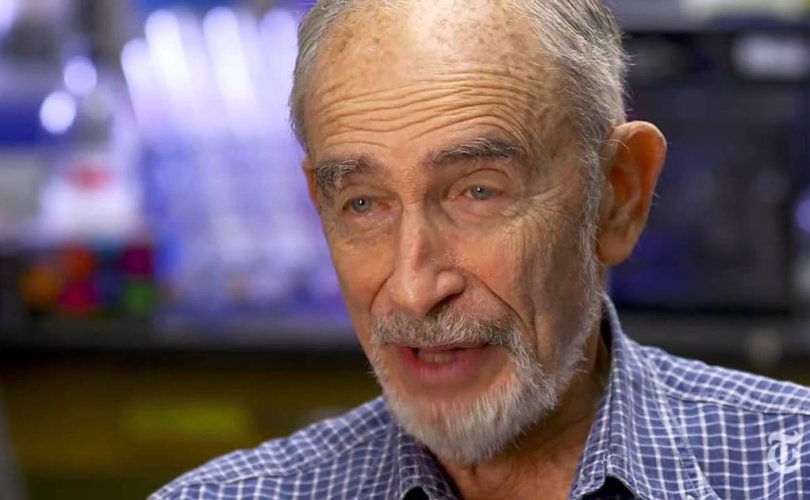 January 17, 2017 (LifeSiteNews) – The leading population control activist speaking at the Vatican next month has compared human babies to garbage, said every sexually active woman needs “free access” to abortion and contraception, and said the Catholic Church's moral teachings are “just as unethical” as a “terrorist act.”

Dr. Paul Ehrlich is the undisputed father of the modern, pro-abortion population control movement. He has defended mass forced sterilization and even forced abortion.

Ehrlich has made inflammatory statements about the hierarchy of the Catholic Church being a force of “evil.” He has criticized Pope Francis' encyclical Laudato Si' for not endorsing population control and said that the pontiff should embrace positions contrary to Church teaching. Nevertheless, the Vatican invited Ehrlich to present a paper at an upcoming conference.

Here we list some of the most shocking positions Ehrlich has advocated in his books and interviews.

Population control and compulsory abortion are acceptable under the U.S. Constitution:

1968 and 1977: “Indeed, it has been concluded that compulsory population-control laws, even including laws requiring compulsory abortion, could be sustained under the existing Constitution if the population crisis became sufficiently severe to endanger the society.” (The Population Bomb; Ecoscience: Population, Resources, Environment, p. 837.)

'More and more' people are the cause inflation:

August 3, 1981: “When you look at the cures for inflation that don’t consider the very fundamental cause of inflation that is, more and more people attempting to devour a finite pie – the notion that either supply side economics or standard Keynesian economics is going to solve it is just crazy.” (The Spokesman Review)

There are too many people on Earth:

February 6, 1989: The world has “perhaps” five times as many people as it can tolerate. (Our Earth is Past the Point of No Return, Newsday)

Sex-selective abortion might be a better fate for girls than being born:

2011: “It would be a good idea to let people have their choice so that they could have fewer children and could have what [gender] they wanted.” It may be better for girls to be aborted because “You can be aborted as a conceptus, you can be killed at birth, or you can be sold into slavery and die in a slum someplace. It would be interesting to know how many females you’re keeping out of hideous situations [when they are not] killed or infanticided.” (Commenting on sex-selective abortion in an interview with Mara Hvistendahl)

We need to lower the birth rate rather than focus on feeding people:

January 9, 2013: “Too many studies asking 'how can we possibly feed 9.6 billion people by 2050?' should also be asking 'how can we humanely lower birth rates far enough to reduce that number to 8.6?'” (Can a collapse of global civilization be avoided?, published in Proceedings of the Royal Society)

Opposition to contraception is part of a 'dangerous trend' of religious 'endarkenment':

January 9, 2013: “To our minds, the fundamental cure, reducing the scale of the human enterprise (including the size of the population) to keep its aggregate consumption within the carrying capacity of Earth, is obvious but too much neglected or denied. There are great social and psychological barriers in growthmanic cultures to even considering it. This is especially true because of the 'endarkenment'—a rapidly growing movement towards religious orthodoxies that reject enlightenment values such as freedom of thought, democracy, separation of church and state, and basing beliefs and actions on empirical evidence. They are manifest in dangerous trends such as climate denial, failure to act on the loss of biodiversity and opposition to condoms (for AIDS control) as well as other forms of contraception. If ever there was a time for evidence-based (as opposed to faith-based) risk reduction strategies, it is now.” (Can a collapse of global civilization be avoided?, published in Proceedings of the Royal Society)

Reducing fertility rates via contraception and abortion a 'win-win' for societies:

January 9, 2013: “If foresight intelligence became established, many more scientists and policy planners (and society) might, for example, understand the demographic contributions to the predicament, stop treating population growth as a ‘given’ and consider the nutritional, health and social benefits of humanely ending growth well below nine billion and starting a slow decline. This would be a monumental task, considering the momentum of population growth. Monumental, but not impossible if the political will could be generated globally to give full rights, education and opportunities to women, and provide all sexually active human beings with modern contraception and backup abortion. The degree to which those steps would reduce fertility rates is controversial, but they are a likely win-win for societies.” (Can a collapse of global civilization be avoided?, published in Proceedings of the Royal Society)

Women should have free contraception and abortions:

January 11, 2013: “Studies have shown that when women are given full rights, they have fewer children, which will help slow birth rates. We also need to give every sexually active human free access to modern contraception and emergency abortion.” (As quoted in The Stanford Review)

'Nobody…has the right to have 12 children or even three':

World population must be reduced:

2014: “Society needs rescaling – we’ve got to reduce the size of the entire human enterprise.” (Hope on Earth: A Conversation, as highlighted by ChurchAndState.org)

'The pope and many of the bishops are one of the truly evil, regressive forces on the planet':

2014: “Think of the influence on sex of the big unethical monotheisms that run much of our Western world and believe themselves to be above criticism. Prior to their dominance, the pagans in the Roman Empire let each other live and let live—as long as you helped protect your fellow citizens by doing the proper sacrifices to the local deities. The pagans weren’t interested in converting others. Of course, the most unethical thing going on now with one of the monotheisms, Catholicism, is opposition to the use of contraception. The main source of that is the Vatican and its bishops. Yet Catholics use contraception as much as non-Catholics, and they have abortions with even higher frequency. But the reason that the hierarchy fights against both is that the higher-ups in the church don’t want to admit that the Protestants and Jews were right. The picture with Islam is more mixed and not remotely as injurious as the Catholic position. Islam, like Protestantism and originally henotheistic Judaism, generally permits contraception, and since the Pharisees, Judaism has had little interest in proselytizing. All are unethical since their leaders often attempt to dictate the behavior, especially sexual behavior, of others with at the very least threats and at the worst torture and murder. All of them, with trivial exceptions, tend to oppress women. Much of this is an evolutionary continuation of male dominance, based now often on dictates received from imaginary entities. And, of course, in most societies criticizing the ridiculous ideas of religion cannot be part of reasonable social discourse.

“Thus you have ‘God-fearing’ people trying to maintain their rigid positions, especially trying to control the lives of women. I consider that their rigid opposition to something so basic, so critical to the future of life on Earth, as controlling reproduction to be just as unethical as any major affront to the environment or terrorist act. They’re working to kill people—women who need safe abortions now, and our descendants who are likely to have much higher death rates related to the decay of human life-support systems as a consequence of overpopulation. The pope and many of the bishops are one of the truly evil, regressive forces on the planet, in my opinion, interested primarily in maintaining their power. What other collective conclusions should one reasonably draw from the outrageous lawsuits that have been filed on behalf of so many victims of pedophilia and other crimes against humanity, all covered up by the church?

“Consider the bishops assaulting nuns for trying to be good Christians and helping people, while turning their backs on the child abuse that has become one of the defining attributes of the church. And it’s not just the Catholic Church. Think of the state of women in general.” (Hope on Earth: A Conversation, as highlighted by ChurchAndState.org)

Overpopulation could lead to cannibalism:

May 22, 2014: “We will soon be asking, 'is it perfectly okay to eat the bodies of your dead because we’re all so hungry?'…It’s moving in that direction with ridiculous speed.” (Interview with HuffPost Live, suggesting overpopulation could lead to cannibalism, as quoted by the Daily Mail)

Having babies is like throwing trash in your neighbor's yard:

May 31, 2015: “The idea that every woman should have as many babies as she wants is to me exactly the same kind of idea as everybody ought to be permitted to throw as much of their garbage into their neighbor’s backyard as they want.” (The Unrealized Horrors of Population Explosion, New York Times)

Pope Francis is “dead wrong” for not prompting population control as a solution to environmental problems:

September 14, 2015: Laudato Si is “raving nonsense” for not promoting population control… “He [Pope Francis] is right on some things but he is just dead wrong on that. There is no competent scientist who would say there is not a problem with population growth. In other words, the pope is dead wrong. Here he is following an antique doctrine that it is impossible to change. I am sure he knows better, he is not a dope.” (For Nature Climate Change as quoted in The Guardian)

October 25, 2015: “Pope Francis needs to heed his own comments on the Church’s 'obsession' with contraception and abortion, and assume a leadership position in support of women’s rights and family planning. There is little chance that the existential challenge facing humanity will be met if the call for dramatic change in society is not expanded to embrace the global demographic dilemma.” (Nature Climate Change)

During the current pontificate, Pontifical Academies have given prominent platforms to some of the world’s foremost proponents of abortion and population control, including Ban Ki-moon and Jeffrey Sachs.

In April 2015, Sachs, an abortion and population control activist, moderated and co-hosted a Vatican conference on climate change. In 2013, he delivered the keynote lecture at the Pontifical Academy of Sciences.

Ki-Moon, then the Secretary General of the United Nations, met with Pope Francis in October 2016 and publicly praised him for being a “strong voice” for the UN's globalist, environmentalist push. Ki-Moon was at the Vatican for a conference organized in part by the Pontifical Council for Culture. He is an LGBT and abortion activist whose plans to implement the UN's sustainable development goals included the promotion of abortion and the normalization of homosexuality around the world.