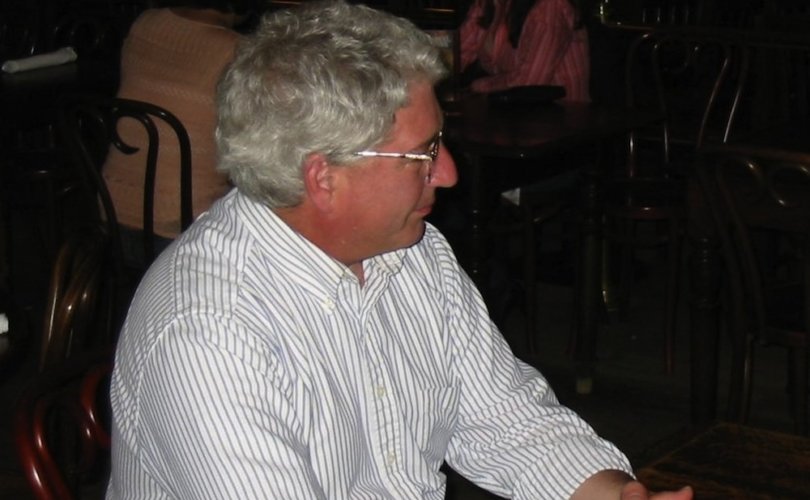 October 7, 2016 (LifeSiteNews) — The Catholic Church lost a humble and intrepid defender when Paul Likoudis, a well-known Catholic writer and investigative reporter, died September 22 at age 61 after a long battle with colon cancer.

Likoudis, who lived in Caywood in upstate New York, left behind his wife Paulette, six children and six grandchildren, as well as a brother, four sisters, and parents James and Ruth Likoudis.

He also left behind a huge cache of writings — the legacy of an exemplary and prolific career, most as news editor for The Wanderer, an orthodox Catholic weekly headquartered in Saint Paul, Minnesota.

“It’s kind of tough to summarize 30 years of journalism in one sentence, but his loss is going to create a void in Catholic journalism that will be felt for a while,” Joseph Matt, president of The Wanderer, told LifeSiteNews. “He just covered such a broad range of topics for us. … When he’d get on a case, he wouldn’t let go. He’d pursue it until he got some results.”

Notably, in the late ’80s and ’90s, Likoudis investigated and reported on allegations that some Catholic bishops were covering up the sexual abuse of minors by their priests, but it took the Boston Globe’s exposé of the scandal in 2002 to get the attention of the public — and of the bishops, according to Christopher Manion.

Director of the Campaign for Humanae Vitae, a project of the Bellarmine Forum, and a weekly columnist and contributing editor of The Wanderer, Manion described Likoudis as a “crack reporter, a great writer, humble and intrepid in pursuit of the right story.”

“Paul looked at whatever was going on, reported it, analyzed it, wrote down a lot of unlovely facts that a lot of people didn’t want to hear,” Manion told LifeSiteNews.

“Had our beloved bishops paid attention to his writings in the ’80s and ’90s, I think that the abuse scandal that erupted in 2002 would have been avoided,” he added. “Unfortunately, the bishops in their wisdom decided to ignore the reports, one after another, that were on the record in The Wanderer, until the Boston Globe went and printed it, and they couldn’t ignore it anymore.”

Likoudis published his own account of the scandal in 2002, the fruit of 15 years of research and reporting, much of which had earlier appeared in The Wanderer. The book, AmChurch Comes Out: The U.S. Bishops, Pedophile Scandals and the Homosexual Agenda, was a “devastating” and “prophetic exposé of the infestation of homosexuality into the Church,” according to Manion.

“I’d say that the quality of his writing, even though some folks felt the sharp prick of criticism, was always charitable and humble. Those were the two overriding qualities that I tried to learn from him,” observed Manion, who has a Ph.D in government from the University of Notre Dame, and has taught at Boston University, The Catholic University of America, and Christendom College.

“Paul was integrally Catholic,” noted C.J. Doyle, executive director of the Catholic Action League of Massachusetts and a close friend of Likoudis, adding: “He not only supported the doctrinal and moral positions of the Church, but he supported the just war and the social justice positions. How many conservative Catholics nowadays write about the just wage or the family wage?”

Indeed, Likoudis’ defense of “traditional Catholic just war teaching” in opposing the Iraq war was “done at some cost to himself and at some cost to The Wanderer,” Doyle told LifeSiteNews. “Many people were offended by his criticisms of George W. Bush and the Iraq War.”

That it did so “exposed the fact that some conservative Catholics can also be ‘cafeteria’ Catholics, insofar as they were willing to support George W. Bush over John Paul II when it came to the Iraq war in the Middle East,” Doyle said. “So Paul showed great integrity as a Catholic and great courage as a Catholic.”

Michael Voris of ChurchMilitant and Matt Abbott of RenewAmerica also paid tribute to Likoudis. “He was very involved in the initial resistance to the rebellion in the Church, and is one of the giants upon whose shoulders we consider ourselves here at ChurchMilitant standing,” Voris stated.

“I’ve referenced Paul's work several times in this column over the last 12 years,” Abbott wrote. “The amount of material he collected and wrote during the course of his career was, and is, remarkable.”

“In significant ways, Paul Likoudis and The Wanderer prepared me for the work that I was later able to do with LifeSite,” echoed Steve Jalsevac, co-founder of LifeSiteNews, who subscribed to the weekly for years.

Although reading the “long, detailed exposé articles” could be “a time-consuming chore, like reading LifeSite some days, I found the articles and Paul’s editorials and other columns always amazing,” Jalsevac noted. “The paper provided an enormous amount of reliable, crucial information that no one else dared to publish so frankly. They were often years ahead of everyone else and put most other Catholic papers to shame.”

As for Likoudis’ own mentors, doubtless those included his father, James, who converted to Catholicism from the Greek Orthodox Church in 1952, three years before Paul, the second of six children, was born. A well-known Catholic apologist, James Likoudis is president emeritus of Catholics United for the Faith and a former contributor to The Wanderer.

Another was Larry Henderson, a highly respected Canadian broadcaster, journalist and Catholic convert. Likoudis worked for Henderson in 1981 and 1982 when the latter edited the Archdiocese of Toronto's Catholic Register. Henderson was reportedly forced out of that position after 13 years over a dispute in 1986 over Henderson's now vindicated belief about Pierre Trudeau's Charter of Rights and Freedoms would eventually lead to in Canada. He went on to edit the conservative monthly Challenge magazine, which Likoudis freelanced for until Henderson retired in 2003.

“Larry stuck to his guns and lost his job,” Manion told LifeSiteNews. “I think he was a model for Paul.” Henderson also commissioned Likoudis to write his biography but subsequently requested it not be published.

Cardinal Francis George of Chicago was also counted among Likoudis’ supporters; before the prelate died of cancer on April 17, 2015, he called Likoudis to offer prayers and commiseration, Manion noted.

As for influences on Likoudis from past generations, he greatly admired writer Hilaire Belloc and 19th century Cardinal Henry Manning of Westminster, Manion told LifeSiteNews.

“John Paul II and I bonded the day of his election,” Likoudis wrote after the pontiff’s 2005 death. “I was sitting in a bar in the very northern tip of Maine after a hard day digging holes for guardrails along a new stretch of U.S. 1 with the Maine-Line Fence Company when the nightly news announced the election of the archbishop of Krakow, who once worked in a rock quarry.”

“If it were possible to ask him now what he would say was his most important achievement in regard to the right-to-life movement, he would say that he and his wife Paulette raised six children in the faith, and at the time of his passing they also had six grandchildren,” she said.

Likoudis, who met his wife in Baton Rouge, Louisiana, while working as assistant editor for the Catholic Commentator, “always saw the pro-life movement as a whole, beginning with Humanae Vitae,” Pope Paul IV’s encyclical reaffirming the Catholic Church’s prohibition of contraception, Moen said. “That was certainly Paul’s feeling, and that was certainly his life.”

Lumen Gentium Catholic: the time of the laity

That document states that by virtue of their “knowledge, competence or pre-eminence,” the laity are “empowered — indeed sometimes obliged — to manifest their opinion on those things which pertain to the good of the Church.”

“This is the age of the laity and Paul took it seriously,” Manion told LifeSiteNews. “Frankly, I think he wanted more — and all of us do — we want the laity to rise up and confront the challenges of this age, and to confront them full of faith and in a sense of community which is, these days, getting pretty tattered.”

Indeed, the Catholic Church’s credibility has been gravely damaged in the wake of the sexual abuse scandals, which continue to rock the Church, Moen noted.

In 1996, Likoudis penned “an extensive series” on the Diocese of Altoona-Johnstown in Pennsylvania. “After the news about the fresh accusations broke last March, The Wanderer received numerous calls from reporters who wanted to get copies of Paul’s reportage,” she wrote. “So, even coverage of bad news can continue to do some good, and may do so into the future.”

“Paul was a unique guy whom your readers should warmly appreciate, pray for, and thank God for,” Manion told LifeSiteNews. “He was a hardworking journalist, and he knew that real journalism required … digging and not just sitting back and waiting for some frustrated bureaucrat to leak a document and call it news.”

“We will miss Paul’s fearless fidelity. He was a good and faithful servant who, for love of God, willingly endured constant, shamefully demeaning criticisms from establishment leaders, especially within the Church,” Jalsevac noted.

“I pray that LifeSite will continue to be prophetic as Paul Likoudis was through the years of his Wanderer and other related mission work,” he added. “I know I owe him a debt.”

The Wanderer’s readers, family, friends, and supporters from far and wide had rallied behind the Likoudis family during Paul’s illness, according to Manion, with much-needed prayers as well as donations to offset the “monumental” medical expenses incurred.

“In those difficult days for Paul and his wife Paulette, The Wanderer family’s financial support not only kept Paul alive, it also kept a roof over his family’s head. That need is as pressing now as it was during his illness,” Manion wrote in his tribute to Likoudis. “Please consider putting your generous gift to Paul’s family on your early Christmas list.”