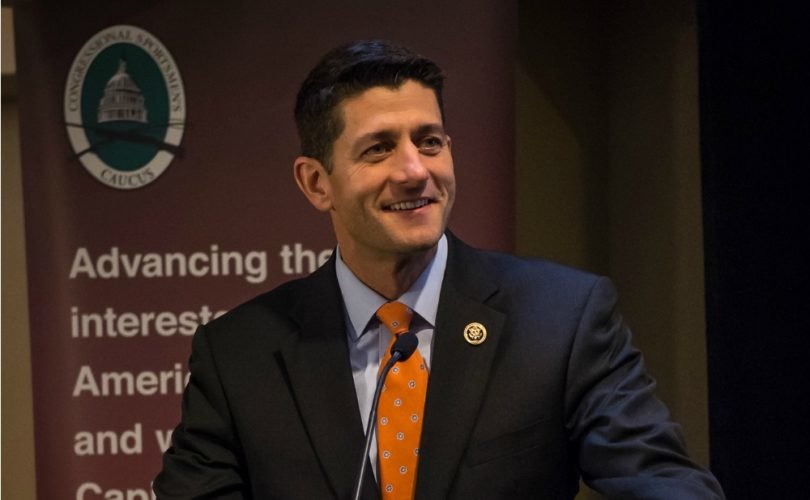 WASHINGTON, D.C., November 5, 2015 (LifeSiteNews) – In his first press conference as Speaker of the House, Paul Ryan said that he would not stop fellow Republicans from offering amendments stripping Planned Parenthood of federal funding during upcoming budget negotiations.

When asked if he thought it likely that a congressman might include such a rider to the omnibus spending bill, which must pass by December 11, Ryan said he would not stand in the way.

“I'm not going to pre-determine the outcome of negotiations that have not even taken place yet,” he said today.

Ryan said he is committed to allowing all Republicans to take part in the budget process – a stark contrast to his predecessor, John Boehner, who tightly controlled amendments and limited input to a handful of people in the House leadership.

That increases the chances that a congressman might actually include language that would deny Planned Parenthood federal funds.

Barack Obama has promised to veto any bill that deprives Planned Parenthood of federal money, even at the cost of shutting down the government. White House spokesman Josh Earnest reaffirmed the president's opposition during his press briefing yesterday.

“Any effort to defund Planned Parenthood because of concerns that people may have about abortion are ideologically driven, primarily because we know that Planned Parenthood doesn’t use federal dollars to perform abortions,” Earnest said. “That’s why it’s particularly dishonest to float those kinds of policy proposals.”

Sen. Chuck Schumer, D-NY, agreed, “Republicans should be crystal clear: If they insist on inserting poison-pill riders into the omnibus bill, they’ll be dragging us into another government shutdown.”

This morning, Ryan appeared to highlight other avenues of taking on the $1.3 billion industry, which receives 41 percent of its income from tax revenues.

“We are moving on Planned Parenthood on multiple fronts,” he said.

“We have defunded Planned Parenthood through the reconciliation process, which is our best chance and opportunity of actually getting a bill on the president’s desk,” he said, “not to mention that we have a select committee” that is investigating allegations that Planned Parenthood has harvested and sold aborted babies' body parts for money.

The reconciliation bill is expected to coast through the Republican-controlled Senate, forcing President Obama to accept the bill or cast a veto standing with the controversial abortion provider.

Ryan has walked a tight line as Speaker, not wanting to make promises he cannot, or will not, deliver.

On CNN Sunday, he said – while Congressmen “have to push issues where we can push issues” – they also have to be “honest with people upfront about what it is we can and cannot achieve.”

Given the constraints of the Senate – where Mitch McConnell reinstituted the filibuster in January – and the president's veto pen, no pro-life legislation is likely to become law until Americans elect a pro-life president and, perhaps, a wider pro-life Senate majority.