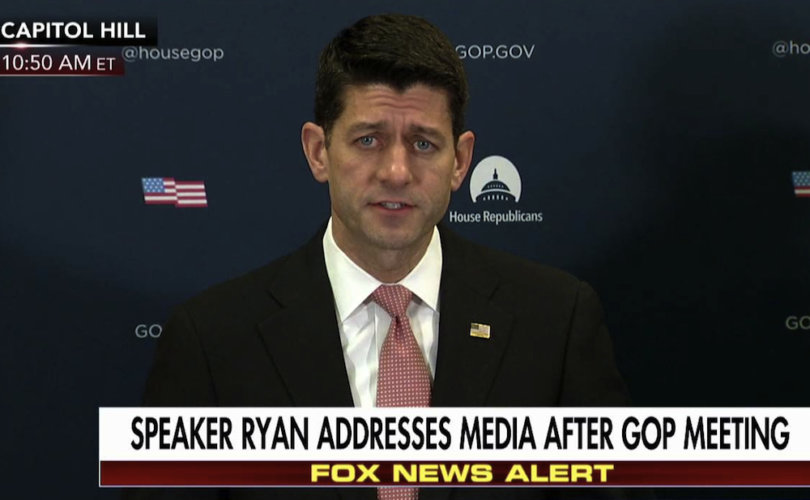 March 28, 2017 (LifeSiteNews) – Speaker of the House Rep. Paul Ryan says Republicans will defund Planned Parenthood via a budget reconciliation bill even though the American Healthcare Act (AHCA) that would have defunded the abortion giant failed.

If it passed the U.S. House, the bill would only need 51 votes in the U.S. Senate.

Although the ACHA would have defunded Planned Parenthood, it's unclear whether other abortion funding restrictions in it would have survived strict Senate rules.

“We agree with Speaker Ryan that reconciliation is the best way to address taxpayer funding of Planned Parenthood, the nation’s largest abortion business,” said Marjorie Dannenfelser, president of the Susan B. Anthony List. “Before members of Congress leave town for spring break, they must enact a new budget reconciliation bill that redirects the abortion giant’s federal funding to community health centers.”

Republicans have two weeks to do this; the Congressional “spring break” begins April 11.

“Regardless of healthcare, Congress has the votes to get this done,” Dannenfelser explained. “We urge all Republicans, including leadership, House Freedom Caucus, and the Tuesday Group to unify behind this plan, which would be a win for women’s health.”

The conservative House Freedom Caucus and the moderate Tuesday Group opposed the ACHA.

“You promised to defund Planned Parenthood,” Kristan Hawkins, president of Students for Life of America, said in a video message after Republicans pulled the AHCA from the floor because they didn't have enough votes to pass it. “We plan to hold you to that. No matter how you have to do it, we expect you to stand up to their lobbyists. … Don't betray us. Keep your promise!”

Earlier this month, Planned Parenthood refused a deal from the Trump administration to keep and possibly increase its federal funding in exchange for ceasing abortions.

This was “not a deal that we will ever accept,” Planned Parenthood executive vice president Dawn Laguens said.

Planned Parenthood claims abortion is “only three percent” of its business. According to its own annual report, it commits more than 300,000 abortions annually. Ninety-four percent of its pregnancy services are abortion.