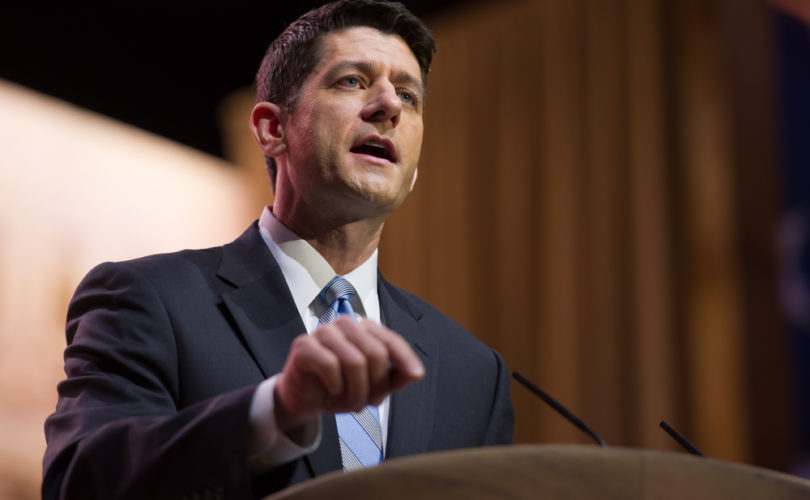 WASHINGTON, D.C., April 12, 2018 (LifeSiteNews) – On Wednesday, Speaker of the House Paul Ryan, R-WI, announced that, as rumored, he would not seek reelection to Wisconsin’s first congressional district.

“What I realize is if I am here for one more term, my kids will only have ever known me as a weekend dad,” Ryan said. “I just can’t let that happen.”

He added that he does not believe “whether I stay or go in 2019 is going to affect a person's individual race for Congress.”

Others contend that his departure makes the midterm elections more competitive by encouraging other Republican incumbents to retire.

In response to the news, several of America’s leading pro-life groups showered the outgoing speaker with praise. The National Right to Life Committee called Ryan a “pro-life hero if ever there was one.” Americans United for Life agreed that he was a “champion of pro-life legislation during his tenure.”

Ryan “has been a champion for unborn children, for their mothers, and an articulate communicator,” Susan B. Anthony List president Marjorie Dannenfelser said, “who continually made the case for redirecting tax dollars away from America’s largest abortion business, Planned Parenthood, and championed conscience rights in health care.”

She cited the U.S. House’s successful October vote to ban most abortions at twenty weeks of pregnancy.

However, a closer examination reveals Ryan’s decidedly mixed record on the pro-life cause.

Throughout his two decades in the House of Representatives, Ryan has consistently voted pro-life, receiving 100% scores from the National Right to Life Committee and 0% scores from Planned Parenthood and NARAL.

“This is truly a new dawn for the unborn and for those women and men who defend them,” Ryan told the 2017 March for Life. “Know that we march with you and that we will not stop fighting until every life is protected under the law.”

Those promises often failed to translate to policy results.

Over the years, Ryan voted for and presided over multiple budget resolutions that continued the more than $500 million Planned Parenthood receives from taxpayers annually. Pro-life leaders called on the GOP to make defunding Planned Parenthood “non-negotiable” in budgets passed under Barack Obama, but Ryan defended not doing so on the grounds that “in divided government, no one gets exactly what they want.”

Last month, Ryan said that supporting the most recent budget was necessary to fund the military. But critics like Rep. Thomas Massie, R-KY, argue that under Ryan, the House forbade lawmakers from voting on amendments concerning Planned Parenthood or any other conservative objections to the bill.

“A more complete betrayal of the electorate I have not witnessed,” Massie tweeted.

Moreover, while Ryan’s House passed several pro-life measures, only the one letting states defund Planned Parenthood ever became law. It is true that the 20-week abortion ban and Obamacare repeal/Planned Parenthood defunding ultimately died in the Senate, beyond Ryan’s control – a fact Ryan himself referenced on occasion. However, he generally only made the point in response to criticism of his effectiveness, and did not proactively challenge Senate Majority Leader Mitch McConnell to fight for legislation the House sent him.

On Thursday, political consultant Christopher Jacobs argued at The Federalist that responsibility for not repealing Obamacare – and, by extension, not defunding Planned Parenthood – ultimately rested with Ryan. He noted that House leaders didn’t begin drafting their first Obamacare replacement until around the time of Trump’s inauguration. Once they had a bill, they attempted to rush it to a vote in just six weeks, with little opportunity to review or amend it.

“The relevant committee chairs and elected leaders share responsibility for these twin debacles,” Jacobs wrote. “But in the House, the buck stops with the speaker, placing the lion’s share of the blame on Ryan.”

Nobody has yet announced intentions to succeed Ryan as speaker, though Majority Leader Kevin McCarthy, R-CA, and Majority Whip Steve Scalise, R-LA, are seen as the most likely. Rep. Jim Jordan, R-OH, is seen as a more conservative dark-horse contender, but said it was “way too early to talk about who’s running.”