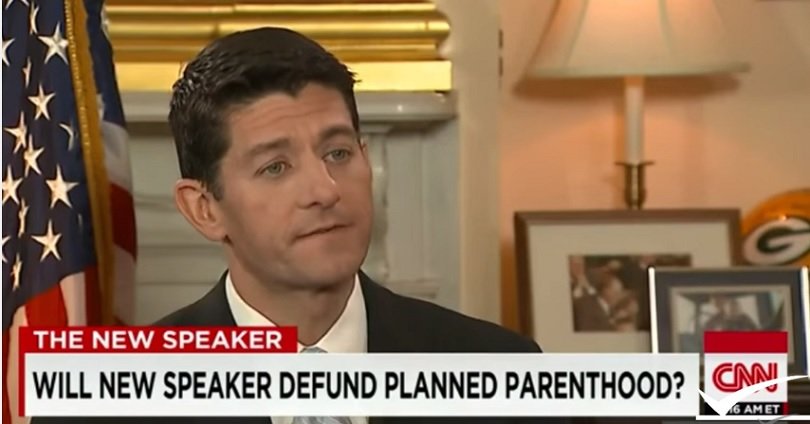 WASHINGTON, D.C., November 2, 2015 (LifeSiteNews) – Defunding Planned Parenthood won't happen this year, Paul Ryan confirmed this weekend. Instead, the House will turn its focus to investigations into whether the abortion industry illegally sells the body parts of aborted babies.

On CNN's State of the Union program Sunday, the newly elected Speaker of the House told Dana Bash that he would counsel Republicans to be realistic about setting legislative goals.

“I think being an effective opposition party means being honest with people upfront about what it is we can and cannot achieve,” Ryan, a nine-term Congressman from Wisconsin, said.

“We have a Senate that has a very difficult process when it comes to actually getting bills voted on,” he said.

In January the Senate restored the filibuster, abolished under Democratic Majority Leader Harry Reid, which requires bills to receive 60 votes. The Democratic minority has used that procedural to block pro-life legislation from reaching the floor.

In the Republican-controlled Congress, conservatives lack the votes to overcome either roadblock.

Paul's Senate counterpart, Majority Leader Mitch McConnell, said in September that defunding the abortion industry is yet “another issue that awaits a new president, hopefully with a different point of view about Planned Parenthood.”

McConnell and former House Speaker John Boehner squelched efforts to shut down the government in order to withhold half-a-billion dollars of taxpayer funds from Planned Parenthood for one year.

“We have a president that isn't willing to listen, that isn't going to sign lots of our bills into law,” Paul Ryan said this weekend. “We have to operate within those constraints.”

“I don't think Planned Parenthood should get a red cent from the taxpayer,” Ryan, who has earned a strong pro-life voting record throughout his career, said. “I've always believed that, even before these disgusting videos came out.”

Instead, he intends for Congress to push its “oversight” functions by investigating allegations of multiple felonies captured in undercover videos from the Center for Medical Progress.

“We also have to push issues where we can push issues. We have to speak truth to power,” he said.

“The special committee on Planned Parenthood, I think, should be in the driver’s seat overseeing this process,” he said.

But Ryan held out the possibility that congressmen may be able to add defunding amendments to legislation in a less “tightly” controlled House.

Paul Ryan for House Speaker? A look at his record on life and family