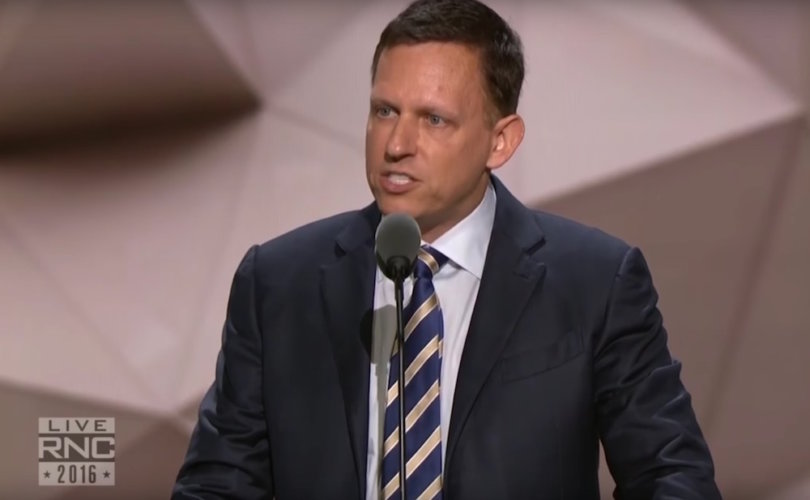 See Theil comments in video above from 4:00 minutes onwards.

CLEVELAND, July 22, 2016 (LifeSiteNews) – Donald Trump will not wage “fake” culture wars, which distract from “our real problems,” said Paypal co-founder Peter Thiel at the Republican National Convention on Thursday night. In making the brief speech, he became the first openly gay speaker ever to address the RNC.

“When I was a kid, the great debate was about how to defeat the Soviet Union. And we won,” said Thiel, who has headed up Silicon Valley’s support for the New York billionaire. “Now we are told that the great debate is about who gets to use which bathroom.”

“This is a distraction from our real problems,” he said. “Who cares?”

“I don’t pretend to agree with every plank in our party’s platform. But fake culture wars only distract us from our economic decline,” he continued. “And nobody in this race is being honest about it except Donald Trump.”

Although the 2016 Republican Party platform opposes efforts to force schools and public accommodations to open their restrooms to members of the opposite sex, Donald Trump has signaled his lack of interest in the issue and general support for transgender people using the restroom of their choice. He initially criticized North Carolina’s H.B. 2, although he later said he backed the state law.

The 2016 GOP platform also calls for the nation to reinstate the traditional definition of the family, by constitutional amendment if necessary. Donald Trump has only said that he would appoint Supreme Court justices in the mold of Clarence Thomas and Antonin Scalia, who may one day overturn last year’s Obergefell v. Hodges decision. He has never said he supports redefining marriage but is generally mum on the subject, and social issues in general. Last night, he gave the first presidential acceptance speech in history to mention “the LGBTQ community.”

Each one of the three sentences received boisterous applause from the Republican delegates inside Cleveland’s Quicken Loans Arena.

Gregory T. Angelo, president of the Log Cabin Republicans, a group of homosexuals inside the GOP, wrote that Thiel’s words and the crowd’s “resounding ovation” gave him “goosebumps.”

Thiel had joined the fray over transgender bathroom bills before, pulling 400 jobs from North Carolina over H.B. 2.

“While trying to make one minority group comfortable, open bathroom and shower policies ignore the feelings of women who have been abused or who have cultural and religious modesty concerns which make them uncomfortable with men in their bathroom or showers,” she said. “Concerned Women for America cares about this policy because it creates an enormous opportunity for abuse, as other men may use it to gain access to the vulnerable.”

“There are currently about 850,000 sexual predators on the national registry who will use any pretext to access innocent women and children,” she concluded.