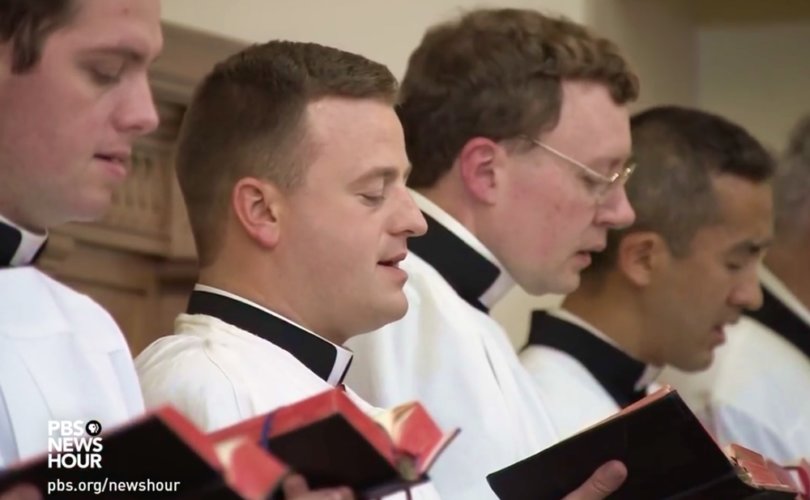 PBS “News Hour” aired a five-minute report on November 27 about an American seminary, Our Lady of Guadalupe, and its chart-topping new album of Gregorian chant. The college, near Denton, Nebraska, is the English-speaking seminary for the Priestly Fraternity of Saint Peter (FSSP).

The segment presented its sprawling stone buildings and interviews with three members of the FSSP against the soundscape of the Fraternity’s hit album “Requiem.”

“The early Christians, we believe, would have been singing something that resembles what we have now and what we call Gregorian chant,” Father Zachary Akers told an interviewer.

Akers, a graduate of the seminary, was initiated early into Gregorian chant: when he was a child, his mother played recordings of it to soothe him.

“Our relationship with God, it transcends mere words,” he said. “We pray not just with our mouth, but with singing, with our heart being uplifted to God.

The video interview shows the over ninety students in their traditional black cassocks. Their Academic Dean, Father Joseph Lee, explains that they must all study Gregorian chant and Latin during their seven-year stint.

“We’re not necessarily performing the music,” says one gifted seminarian. “We are praying the music.”

Record label De Montford Music, which produced “Benedicta” by the Monks of Norcia, approached the FSSP about recording their music. The Fraternity collected twelve of its most talented graduates, including Fathers Akers and Lee, from around the world and produced “Requiem.”

The album spent 13 consecutive weeks at the top of the Classical music charts.

Akers told PBS that the album “is a selection of music that is simply the Catholic Church’s musical list for a funeral mass. We all experience death, and we all experience our return to our Maker, our Creator, and this is something that is very transcendent… I think the music really expresses this reality as well.”

“It’s a unifying, bonding element that transcends fads … fashion … geography … time, and is able to unite people regardless of their race, of who they think is going to win the World Series, or what kind of food they enjoy eating.”

The report ends with soaring music and Akers asserting that Gregorian chant is “very much part of [their] life as Catholics.”

The Priestly Fraternity of Saint Peter, which is in full communion with Rome, is a traditionalist order dedicated to the Usus Antiquior, or Old Rite, of the Latin liturgy.  It has another seminary in Wigratzbad, Germany. The Fraternity was founded as a clerical society of apostolic life in 1988. Currently, they number 437 men as members, 129 of them seminarians.