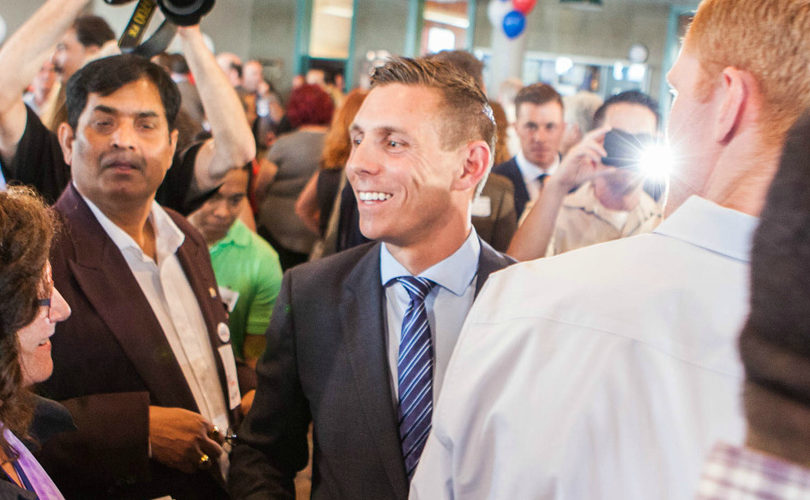 TORONTO, April 30, 2015 (LifeSiteNews.com) — In what might be his strongest comments on the topic thus far, PC leadership contender Patrick Brown has affirmed his opposition to Premier Wynne’s sex-ed agenda for children, saying that school is a place to teach facts and science while “it's up to families to teach values.”

“I think it's up to families and parents to decide what's age appropriate. And that's why I've been critical of this curriculum and despite the fact that I've been criticized for speaking at the rally, despite the fact that my opponent [Christine Elliott] has criticized myself and [former PC leadership contender] Monte McNaughton, I can tell you that I'm not going to change my opinion that this is not the best approach,” he said.

The PC leadership vote takes place May 3 and 7, and the new leader will be announced at a convention May 9. PC Party members can find their voting station at the party’s website here.

Brown’s comments come as the Liberal government buckles down to roll out graphic and explicit sex-ed in schools across the province next fall despite facing huge backlash from tens of thousands of parents from a variety of ethnic backgrounds and religions.

Eileen Lu, who was at the event and who is a spokesperson for the GTA West Chinese community, told LifeSiteNews that since Premier Wynne has entirely ignored the Chinese community’s concerns with the sex-ed, then they were “forced onto street to express our opinion.”

“And we welcome and will vote for the politicians who will listen to voters and keep their promises,” she said.

Lu, who has two children ages 5 and 7 in the elementary school system, called the sex-ed curriculum “incomplete, biased, and misleading.”

“My greatest concern about the curriculum is that kids at a certain age are not mentally and physically mature to learn content like that. So, the curriculum can mislead them in a direction that they’re not supposed to go. And also, it sexualizes the kids and makes them vulnerable to offenders like Ben Levin,” she said.

Ben Levin was Ontario’s former Deputy Minister of Education who oversaw the sex-ed’s development before being arrested and convicted of child-related sexual charges.

Jack Fonseca of Campaign Life Coalition (CLC) said it’s “reassuring” to see that Brown is “dedicated to carrying the torch on parental rights and the protection of children.”

“Patrick is spot on about parents having the exclusive role and privilege of teaching sexual values to their own children. I don't accept Kathleen Wynne's notion that the Liberal government should be a co-parent of my two young children. And I'm comforted to know that Patrick Brown also rejects the idea of government as a co-parent, especially with something so important as teaching morals and values regarding human sexuality,” he told LifeSiteNews.

Fonseca said that Brown is right to contrast his opponent’s position on the sex-ed curriculum with his own.

“Based on Christine Elliott’s own voting record as an MPP, she cannot be trusted to oppose the Liberal sexuality program. She herself championed the same theory of Gender Fluidity that is so entrenched in the Wynne/Levin curriculum when she co-sponsored the NDP’s transgender ‘Bathroom Bill’ in 2012.”

Earlier this month Elliott attacked what she called Brown’s “outdated views” despite the fact the Brown has surged ahead in the polls due largely to a message that critics say resonates with the PC grassroots base.

For instance, Brown spoke at the February 24 rally against the sex-ed at Queen’s Park, telling parents that “you must be consulted on fundamental changes to a curriculum that directly affects your children.”

“Kathleen Wynne’s approach to the issue of Sex Education has shown little but contempt for parents and families. She seems to think she knows what’s good for your kids – better than you do,” he said at that time.

Fonseca said that CLC has endorsed Brown for leader of the PC party and encourages eligible PC Party members to vote for him in the upcoming leadership contest.

“He's the only candidate who will repeal the curriculum if elected Premier in 2018,” he said.