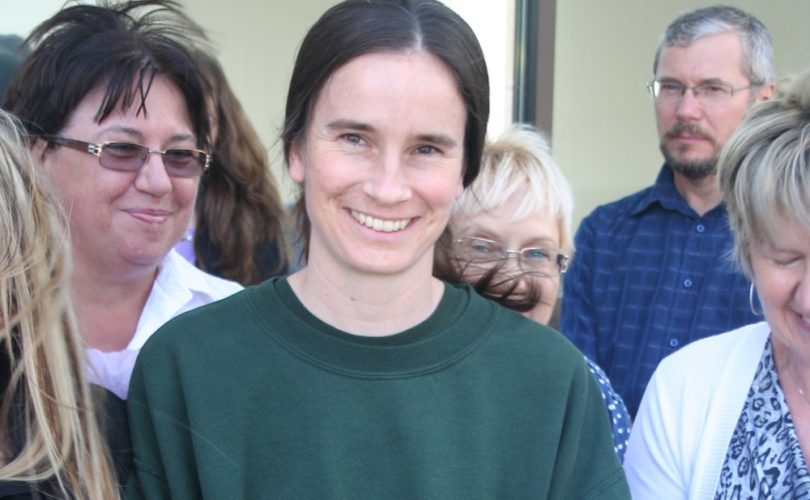 Mary Wagner stands with supporters outside the courthouse after she was released from a previous jail term, on June 12, 2014.Tony Gosgnach / LifeSiteNews.com

“Of course, I’m pleased to be out,” the 41-year-old told LifeSiteNews in a telephone interview, taking time from sorting through all the gifts and cards from supporters that were forbidden to her while in jail. “I’m thankful for the prayers and support.”

Wagner says she plans to visit her parents in BC, and to write an open letter to supporters to express her thanks and her thoughts, similar to one she wrote from jail for the 2015 March for Life in Ottawa. That march was dedicated to her and fellow Canadian pro-life prisoner of conscience Linda Gibbons. Her letter, read to the estimated 25,000 people gathered on Parliament Hill for the May 14 event, is published by LifeSiteNews here.

For her part Gibbons, who has spent a total of 11 years in jail to date for sidewalk counseling outside Toronto’s abortion clinics, was released from Vanier one day after the March for Life, after seven weeks in jail. Her own open letter to pro-life supporters can be found here.

Wagner was arrested December 23, 2014 after she entered Toronto’s Bloor West Village Women’s Clinic, and tried to distribute roses, cards on fetal development, and to counsel women in the abortion clinic’s waiting room.

Judge Mavin Wong of the Ontario Court of Justice convicted Wagner of one count of mischief and two counts of breach of probation April 17, following a one-day trial during which Wagner did not speak or defend herself, in solidarity with the victims of abortion.

Faced with Wagner’s refusal to cooperate with the court or get a lawyer, Wong appointed Justine Fitzgerald in March as amicus or “friend of the court” to advocate on the pro-life prisoner’s behalf.

Abortion clinic worker Nadine Clark testified at the April trial that Wagner tried to speak to one of the three women in the clinic’s waiting room, who then began crying, and whose husband became upset. The women were moved to a back room, and the police were called. Wagner was arrested shortly afterward, leaving roses and cards behind. According to Clark, the abortions went ahead as planned.

Wong stated in her judgment that Wagner, “armed with red roses and business cards” had “surreptitiously entered” the abortion clinic intending to “interfere with its business” of “conducting legally sanctioned medical procedures.”

Crown prosecutor Craig Power stated that the Crown was seeking more time in jail for Wagner, and on May 5, Wong sentenced the pro-life prisoner of conscience to ten months in jail and a further two years’ probation, after reviewing a pre-sentencing report listing her previous convictions.

Because she was credited with time served, Wagner was released on July 25, and attended a Mass at Precious Blood Parish in Scarborough, celebrated by Archbishop Lawrence Saldanha, archbishop emeritus of Lahore, India, followed by a small reception with friends and supporters.

Wagner told LifeSiteNews she couldn’t help thinking of the women imprisoned in Vanier’s medium security wing, which has no air conditioning although the windows can be opened, who would be “stifling” in Toronto’s current heat wave.

Wagner, whose first arrest for pro-life counseling was in 2000, and who has been arrested at least six times in Ontario and spent about four years in jail, said she hoped people would not “focus on me and my hardships” but, as she wrote in her March for Life letter, focus instead on the “many mothers who end up at these places where their children are brutally killed.”

“Let us think of these mothers and babies, pray for them, and as much as possible be there for them, as we would be there for our own children, mother, father, sister, brother, or friend,” Wagner wrote then. “Are we who urge her to do what is right and good, to welcome her baby and to trust all will work out well, willing to make sacrifices ourselves to help her and her child? Will we be there for them?”

She exhorted pro-life Christians to be “Gospel of Life people” and to be willing to admit if they need to change. “The struggle is ultimately in building what Saint John Paul II called a Civilization of Life and Love, and it begins within each one of us.”

People must ask themselves: “Do I seek God’s Kingdom, His way first, trusting that He will take care of everything else?”

“All we need is to listen to Jesus who says: ‘Love one another as I have loved you…Whatever you have done for the least of my brothers you did it to me.…’,” she wrote.

Canadian premiere of Not About Mary Wagner film this Sunday 3 p.m. in Toronto